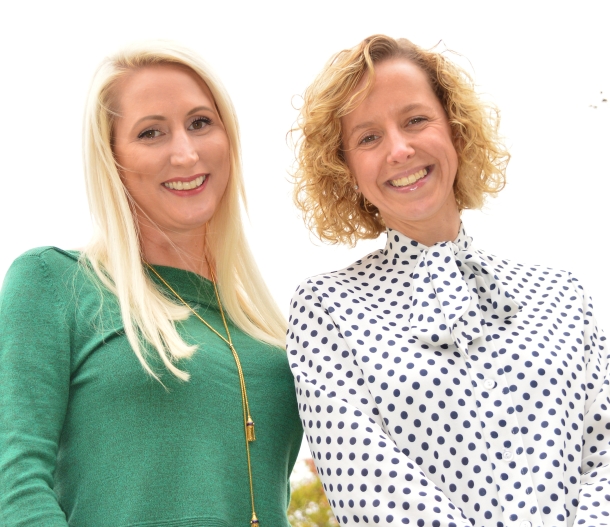 As consultant jewellery valuers for Richard Winterton Auctioneers, Heather Callaway and Louise Ludlam-Snook often have enviable treasures cross their path. And none more so than one particularly sparkly piece which is set to go under the hammer this month.

A stunning 4ct natural yellow diamond cluster ring, with a tentative guide price of some £20,000 to £30,000, will be the star lot at the forthcoming Fine and Decorative Arts sale, which takes place at The Lichfield Auction House on December 12.

“We couldn’t tell with our hand-held instruments whether the colour was natural or induced, which makes a huge difference to the price, so we took the ring to the Gemmological Laboratory in Mayfair to be properly assessed,” says Heather.

Happily, the diamond was certified as a natural yellow stone, with the lab issuing a ‘natural fancy intense yellow’ colour grade. 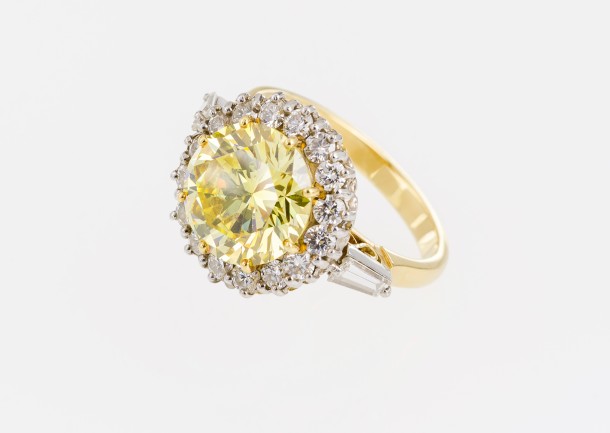 The beautiful natural yellow modern round brilliant cut diamond is bordered by 16 smaller modern round brilliant cut diamonds and flanked by two tapered baguette diamonds to the shoulders, all set into a hallmarked 18ct gold band. A breath-taking lot, it is sure to attract plenty of attention from buyers looking to bag such a statement jewellery piece.

With some 25 years in the jewellery trade under her belt, Heather is a certified gemmologist and diamond grader, as well as a Fellow of the Institute of Registered Valuers. As chairman of the Education Steering group for the National Association of Jewellers, Heather is passionate about supporting education within the jewellery industry.

As well as being consultant valuer at Richard Winterton Auctioneers, Heather carries out valuation work for the Assay Office in Birmingham, which is responsible for hallmarking, and is the in-house valuer for Garrards in Mayfair, London – better known as the Crown jewellers.

Also a diamond grader and gemmologist, Louise is the chairman of the Midlands branch of the Gemmological Association. She previously ran the vintage department at an auctioneers in Birmingham, and has also worked in high-end jewellery retail.

“We’re just jewellery nerds really,’ laughs Heather. “I actually got into the trade by accident; I had a Saturday job in a jewellery shop and that’s where I got the bug. I was very fortunate to be inspired by having a really good employer and, by the age of 20, I became one of the youngest registered valuers in the UK.”

There are treasures aplenty to be found at auction

Auctions, say Heather and Louise, can throw up jewellery bargains, with customers seeing a much greater return for their money than buying retail. In fact, the retail value can often be as much as four times the price paid at auction.

“Much of the jewellery we come across here is from house clearances so people don’t know what they’ve got,” adds Louise. “And it’s always the things which people don’t think are worth anything that are the real treasures.

“Recently, we’ve had a Roman intaglio – which is a hardstone cameo – set into a signet ring, and some lovely Georgian pieces, posy rings which are really nice, and we also get a lot of Victorian jewellery. There’s a lot of that around but there are a lot of collectors out there so it keeps its value; Americans are particularly fond of Victorian jewellery.

“Mourning jewellery, which often has hair in it, is a particular favourite and a lot of that was made in Birmingham, in the Jewellery Quarter. We’re very lucky here in the Midlands to have such a historic centre for jewellery on our doorstep.”

The fast-paced auction world can bring its fair share of surprises and, say Heather and Louise, it’s always exciting to see which lots really strike a chord with buyers.

“At auction, everyone has their own specific thing that they go for,” says Heather. “Art deco and art nouveau are always popular, then you’ve got your brands – such as Tiffany, Piaget, Boucheron, Cartier and Rolex – and those will always go well because of the name.”

Natural, untreated amber, says Louise, is another style which is finding a big market, driven by the demands of overseas buyers.

“It’s gone crazy over the past five years or so,” she says. “It’s come down slightly now but it was up to around the same price as gold. It was the Asian and Arab markets which drove up the price.

“A lot of people have natural amber pieces which have been passed down through the family and they don’t realise quite what they’re worth.”

Other precious materials which are seeing a price increase due to foreign buyers include old jade – which is reaching record prices – and antique coral.

“The foreign market has a huge influence on the jewellery trade,” says Louise. “There’s a lot of wealth out there which pushes the prices up. From our point of view, it’s great that the auctions are open to international buyers through the internet; it makes things very exciting, and it’s great news for our sellers too.”

While each and every piece which comes through the doors is carefully assessed and catalogued, Heather and Louise have their own particular favourites.

“I’m a jewellery magpie, I love so much,” says Heather. “Belle Époque is one of my favourite periods, and I love art deco, and Victorian serpent snake jewellery too.”

Louise, on the other hand, is a huge fan of Scandinavian jewellery.

“It’s more simplistic, really high quality silver, well made and well-designed jewellery,” she says. “A particular name is Georg Jensen and, while we don’t get a lot of it here, when we do we know it will sell well.”

One of the more difficult aspects of the job is dashing people’s hopes when they bring in treasures only to discover things are not what they seem.

“We have to assess all of the gems we come across, to check they’re not simulants or synthetics,” says Heather. “There are also a lot of treated stones out there; you might have, for example, a big ruby and the customer thinks it’s a natural ruby when in fact it’s filled with glass and pretty much worthless.”

“Jewellery is a really personal thing, and people do get really sentimental about it,” adds Louise.

“It’s a sensitive situation; we do deal with people who are grieving the loss of someone close, and they sometimes find the process of parting with items difficult,” adds Heather.

“It’s quite overwhelming for people when they inherit pieces and they have no idea what they have. Jewellery tells a story too; often people won’t know whether a piece was grandma’s or passed down from great-grandma and we can look at a hallmark or style and help them to decipher the story.

“Jewellery does talk to you.”

What’s in a name?

Coming up with the name for our magazine was a challenge; after all, it’s our identity so we had to get it right! There are so many ‘Life’, ‘Living’ and ‘Style’ magazines already out there, and we wanted something a bit different… a bit more ‘us’. Our magazine will be packed full of the things we like, from the best restaurants in town to the most stylish ideas for your home, fashion tips, places to go and the most inspirational stories from local people and businesses. And so we came up with J’AIME; French for ‘I like’, or even ‘I love’, depending on how it’s used, it sums up what we’re all about. It’s also sort of a portmanteau (there’s that French influence again!) of our two names, Jan and Amy. And the fact that we were sitting in a French restaurant while brainstorming name ideas might have had something to do with it! So J’AIME it is, and we hope you like it as much as we do!