An Aston Villa season ticket from the pivotal year the club moved to Villa Park and won both the FA Cup and the Football League is coming up for auction in Lichfield.

The 125-year-old member’s card for the 1896-1897 season goes under the hammer with Richard Winterton Auctioneers live from The Lichfield Auction Centre on Monday, September 20, starting at 9.30am.

Mr AB Kender of Lodge Road, Birmingham, paid the princely sum of 10/6 (10 shillings and sixpence, 52½p in today’s money) for the card, which would admit him to all club matches up to the 1/6 tickets stand.

1897 saw Aston Villa Football Club win The Double and move to its present home near Aston Hall, then known as the Aston Lower Grounds but quickly dubbed ‘Villa Park’ by supporters.

The new ground opened on April 17, 1897 with a match against Blackburn Rovers.

This inaugural game is listed in the season ticket and the score – a 3-0 win to Villa – has been inked in alongside, presumably by an elated Mr Kender. 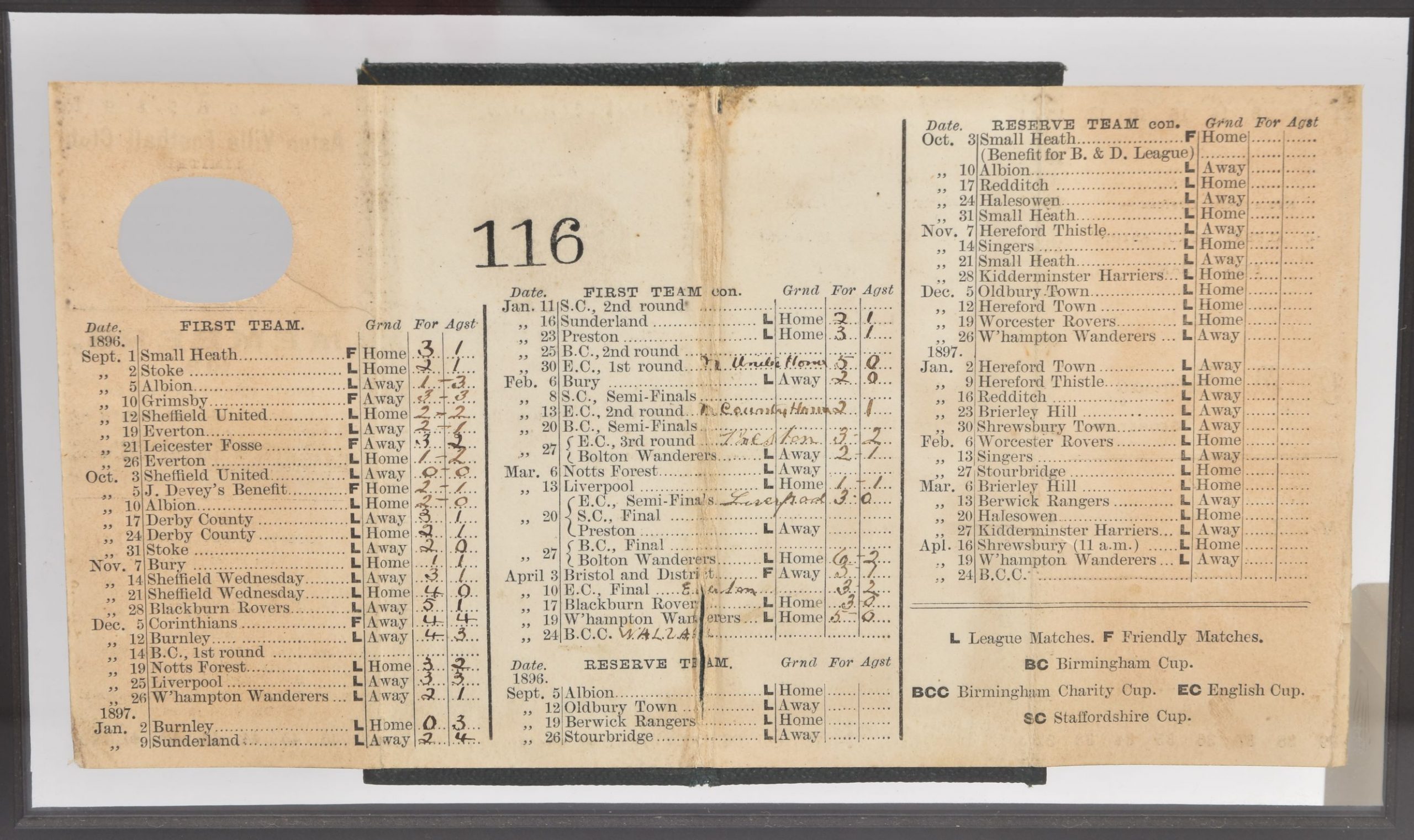 The fixture list from the season ticket, which is being auctioned by Richard Winterton Auctioneers.

“The 1896-97 season was Villa’s ninth in the Football League since being one of its 12 founding members in 1888,” said auctioneer Richard Winterton.

“Not only did they win the title and the FA Cup, furthermore this was the season they moved to Villa Park.

“Mr Kender paid 10/6 for the season ticket – factoring in inflation, a sum worth the equivalent of about £70 today.

“He must have thought that a price well worth paying when watching his team in such thrilling form week upon week.

“Not only has the season ticket survived for 125 years, it’s also in wonderful condition – an especially nice piece of memorabilia for any Aston Villa fan.”

Former Villa captain Ramsay retired from playing due to a knee injury sustained in a match against Nottingham Forest in June 1882 but maintained his ties with the club and on June 26 1886 became the ‘secretary’ – an appointment now regarded as the world’s first football manager.

It was under Ramsay’s captaincy that AVFC won the Birmingham Senior Cup in 1880; his leadership saw the club win its first FA Cup in 1887, with captain Archie Hunter becoming one of the game’s first household names.

Formed in March 1874, Villa emerged as the most successful English club of the Victorian era, with five League titles and three FA Cups by 1901.

The auction catalogue will be online the week before the sale and can be viewed via www.richardwinterton.co.uk/auction-dates.

This website uses cookies to improve your experience while you navigate through the website. Out of these, the cookies that are categorized as necessary are stored on your browser as they are essential for the working of basic functionalities of the website. We also use third-party cookies that help us analyze and understand how you use this website. These cookies will be stored in your browser only with your consent. You also have the option to opt-out of these cookies. But opting out of some of these cookies may affect your browsing experience.
Necessary Always Enabled

Any cookies that may not be particularly necessary for the website to function and is used specifically to collect user personal data via analytics, ads, other embedded contents are termed as non-necessary cookies. It is mandatory to procure user consent prior to running these cookies on your website.