Lichfield Festival is back from July 7 to 17, this year celebrating its milestone 40th anniversary. We take a look at the impressive programme, and speak to the Festival’s Associate Artist, singer and writer Jessica Walker, about her festival concert and what we can expect from the show

July in Lichfield can mean only one thing-Lichfield Festival. And this year’s event, which runs from July 7 to 17, will be particularly special, not just because it’s the first unrestricted event since 2019 but it’s also the Festival’s milestone 40th anniversary.

First, a quick rewind to summer 1982: a future King was born, the Falklands War came to an end, Navratilova and Connors were Wimbledon winners, and Lichfield held its very first summer Festival which, incidentally, included a then entirely unknown Cambridge Footlights team of Stephen Fry, Hugh Laurie and Emma Thompson (check the Festival’s website for a wonderful filmed message from Stephen Fry).

Since that first event, Lichfield Festival has brought a parade of wonderful artists and musicians, as wellas audiences national and local, to the beautiful cathedral city. It’s a chance to try something new, enjoy a picnic on the cathedral lawn, entertain the children, and generally soak up the atmosphere. And, this year, the Festival Fireworks are back with a bang after a 10-year absence to create a spectacular grand finale to the festivities on the final Saturday. 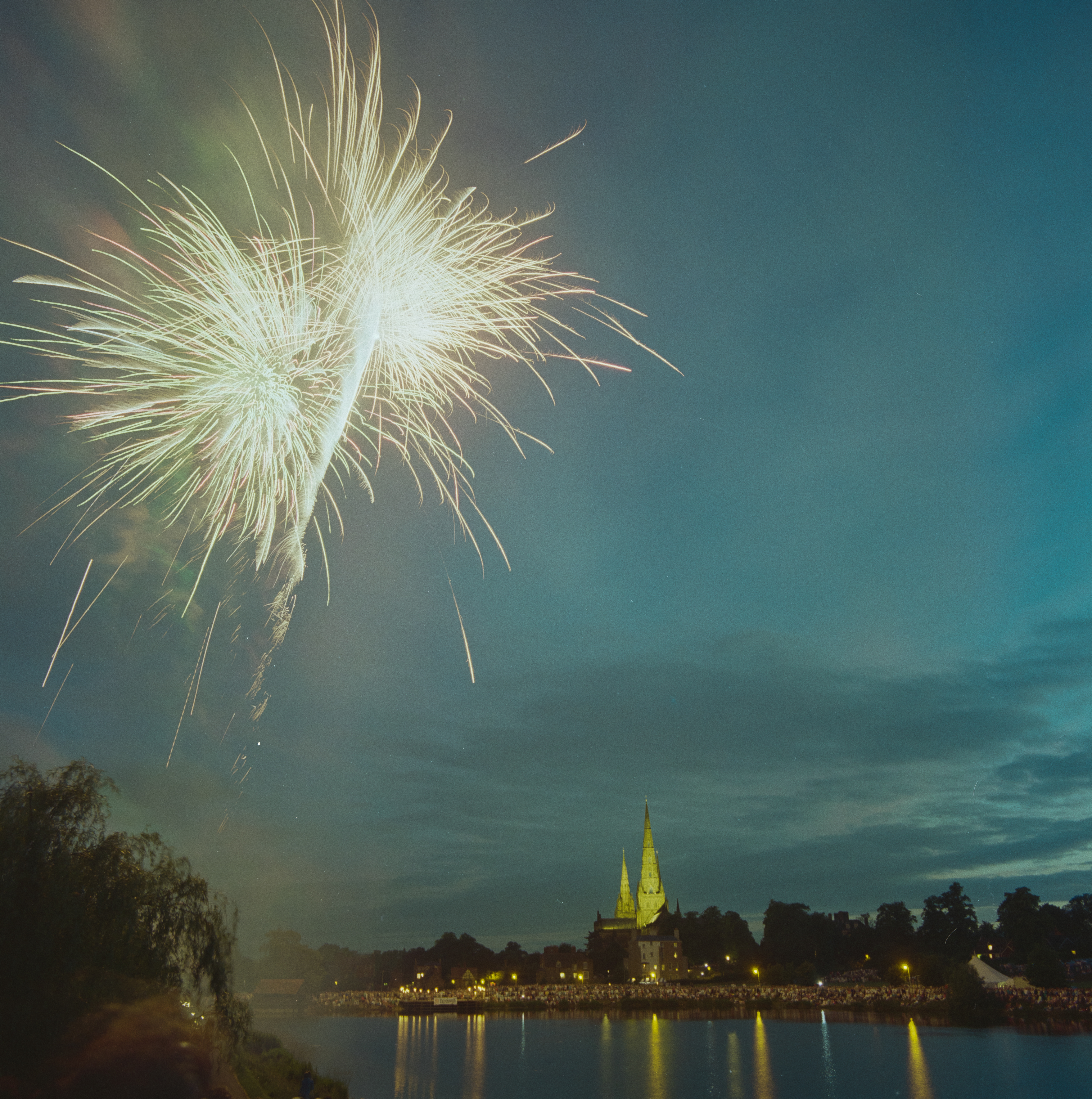 Festival fireworks are returning this year.

“Since the first event in 1982, Lichfield Festival has brought artists and musicians of the highest calibre, and audiences local and national, to this beautiful city,” said Lichfield Festival Director, Damian Thantrey. “Alongside fabulous established and up-and-coming artists, our 40th anniversary will feature works from the first Festival, new commissions, bespoke 1980s themed shows, music honouring the150th anniversary of the composer Ralph Vaughan Williams and the inaugural Midlands Choir of the Year. 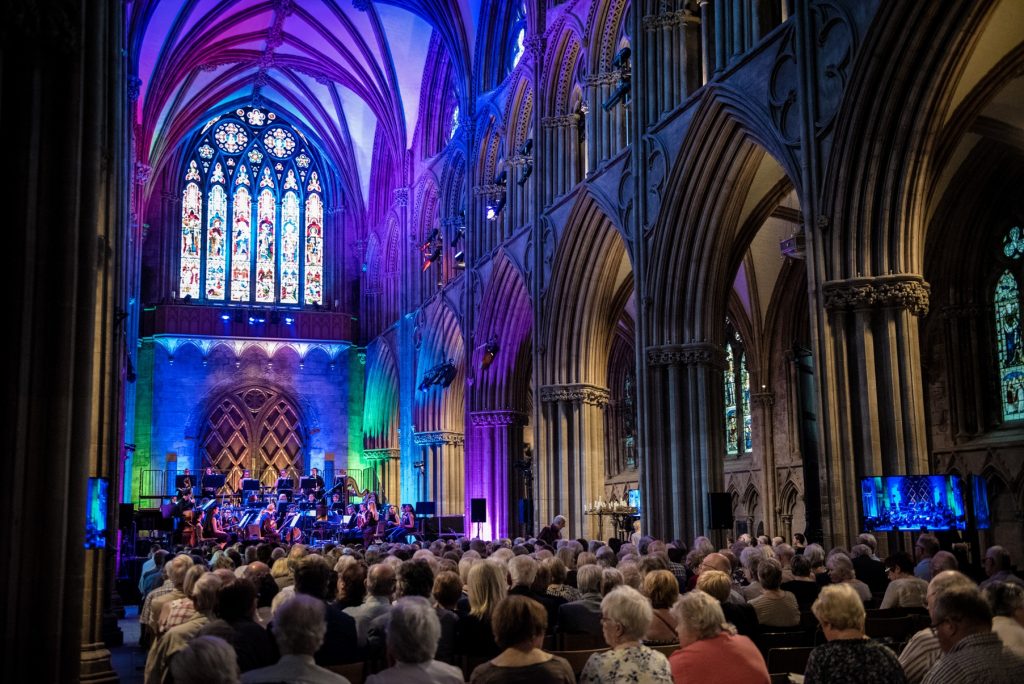 Lichfield Cathedral will be the setting for a series of events.

“As always, there will be dance, drama, comedy, family fun, fireworks and free events–all the hall marks that have made Lichfield Festival a cultural beacon for the last 40 years.”

Pop icon Tony Hadley is opening the Lichfield Festival’s 40th anniversary celebrations this summer with a stunning Lichfield Cathedral concert on Thursday, July 7. The singer and Festival patron is just one of the incredible headliners at this year’s event.

P”op icon Tony Hadley will be opening the Festival.

The cathedral will act as the stunning backdrop for Ballet Cymru’s new production called Dream, while singer-songwriter Ayanna Witter-Johnson and folk band The Longest Johns will also be performing in the stunning space. The festival’s inaugural Midlands Choir of the Year Competition winners will be chosen in a Cathedral showcase of the finest Midlands-based amateur singing groups.

Other headliners include stand-up comedian and host of the BBC2’s Lightning and Live at the Apollo Zoe Lyons, who will be performing at The Hub. 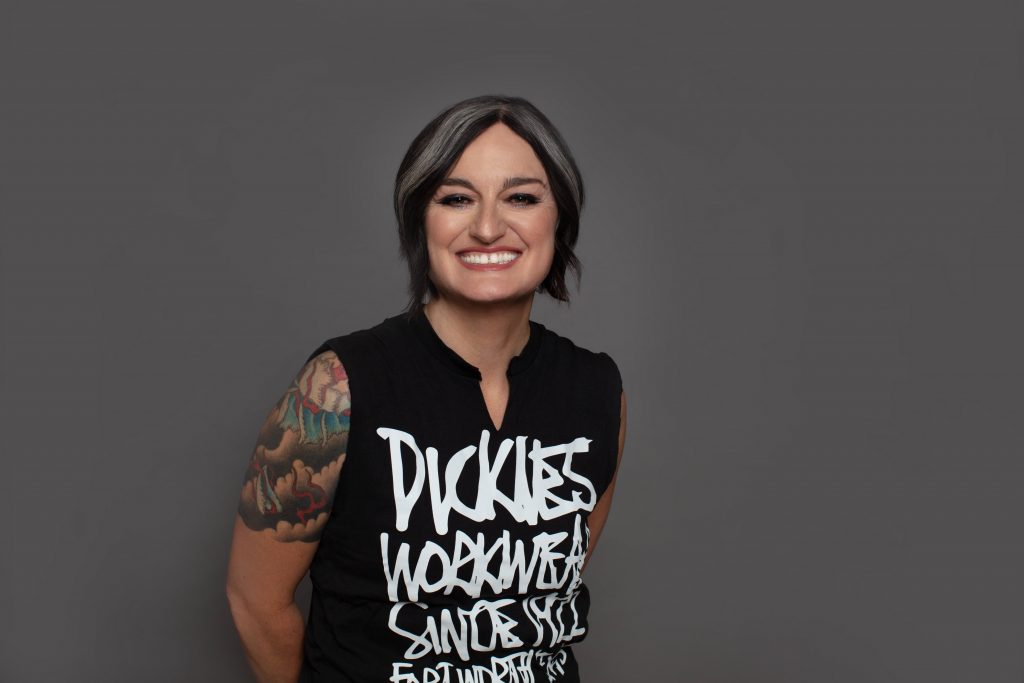 Comedian Zoe Lyons will be at The Hub.

Several works from the first festival in 1982, and music honouring Vaughan Williams’s 150th anniversary have been incorporated into the classical music programme this year. The BBC National Orchestra of Wales, will be playing Vaughan Williams’ Fantasia, alongside Britten and Schumann, in what will be their fourth year attending the festival.

There will be recitals by internationally renowned cellist Steven Isserlis and celebrated guitarist Paul Galbraith, both of which are regular visitors to Lichfield in the festival’s early days. Stephen McNeff’s chamber opera Beyond the Garden will feature mezzo-soprano Susan Bickley, and wine writer Oz Clarke is set to join Armonico Consort for Gin and Phonic, while the Charles Court Opera will perform Gilbert and Sullivan’s Patience. 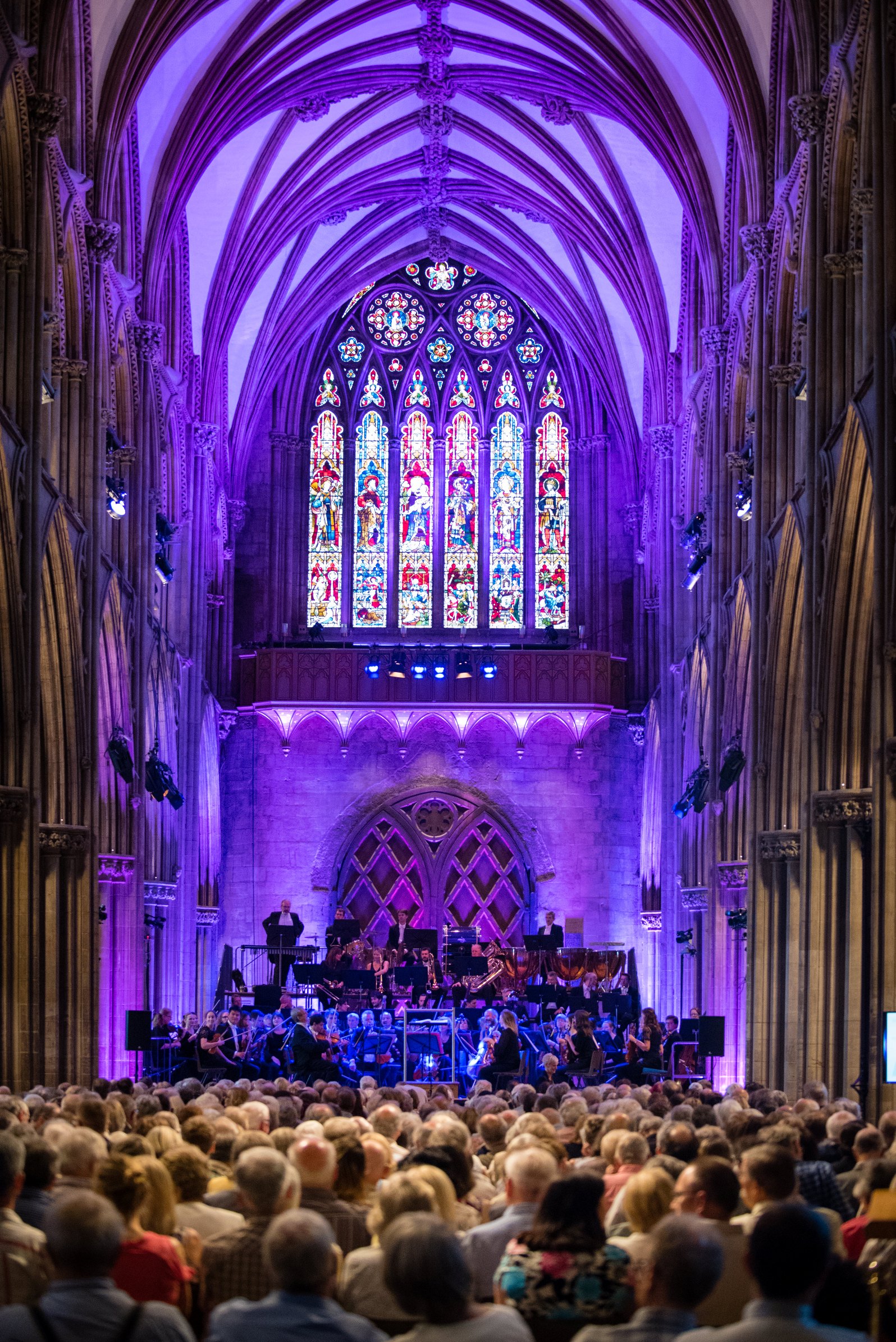 The cathedral is the perfect setting for classical concerts.

Among the Festival’s new Associate Artists, classical pianist Danny Driver will be making an appearance both with the Brodsky Quartet and in a solo recital, while baroque violinist Rachel Podger will perform at the intimate, candle-lit, late-evening cathedral concert.

If you’re looking for something where you can get on those dancing shoes then Jessica Walker and Joseph Atkins are going to revive the great 80s hit songs from Dolly Parton to Annie Lennox and will feature the music of Stephen Sondheim in bespoke festival cabarets.

Singer and writer Jessica Walker is a familiar face at Lichfield Festival having performed at previous events, she is now an associate artist which means she will be back for more. 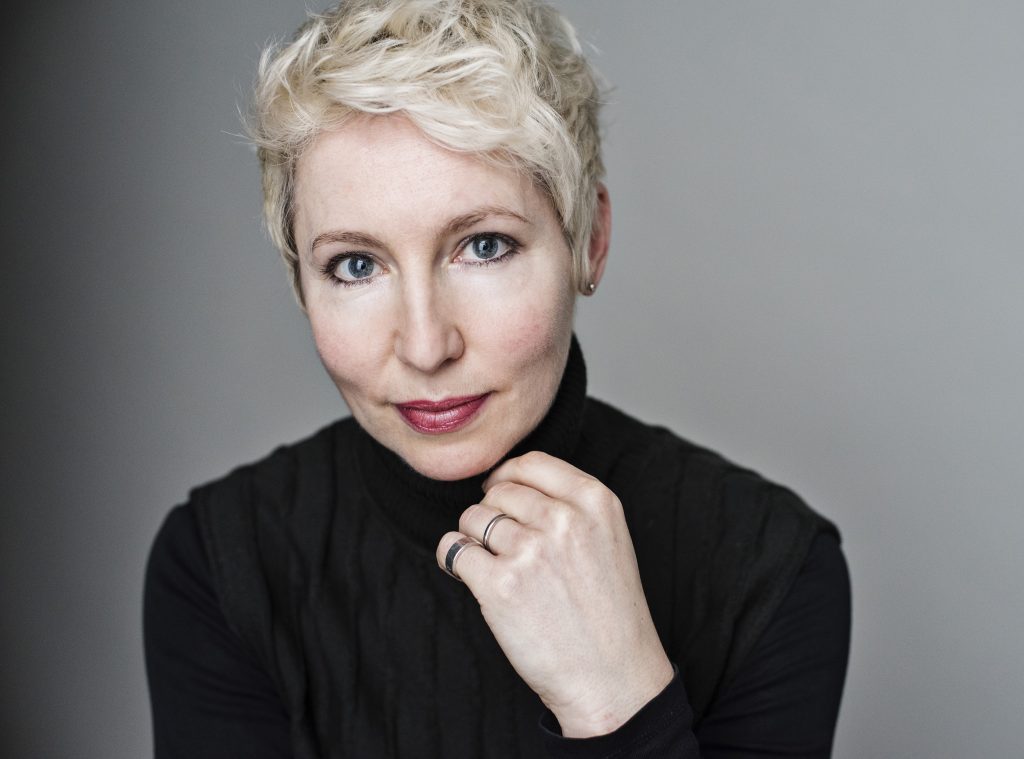 “I have been a regular artist at the festival and just before the pandemic I was an artist in residence but now I’m an associate artist at the festival which means for the next three years I’m committing to do at least one concert there, so I’ve built up quite a regular following now for people who are interested to see what I’ll do next,” Jessica says.

As it’s the celebration of 40 years for the festival, the programme is packed with extra special performances this year, fulfilling festival director Damien Thantrey’s vision of bringing the Eighties back to life.

“Damian, the festival director, was pretty specific about what he wanted me to do because it’s the 40th anniversary, he decided to do a concert of Eighties music and I have to say that was a bit of a challenge,” says Jessica.

“I’ve had to go through various kinds of pop music from the 1980s and think, what can I sing? I’m classically trained but I sing across a lot of styles and types of music, but I rarely sing pop music, if at all. So, he presented me with a big challenge, but I think I’ve got somewhere, and I’ve got a real mix of stuff from Kate Bush to Leonard Cohen, and we’ve even got some synth-pop in there, soI think I’ve covered all bases.

Music director Joseph Atkins and Jessica have worked together to prepare their own versions of some classic hits, meaning there will be something for everyone, every mood and feeling to enjoy in the city of Lichfield. 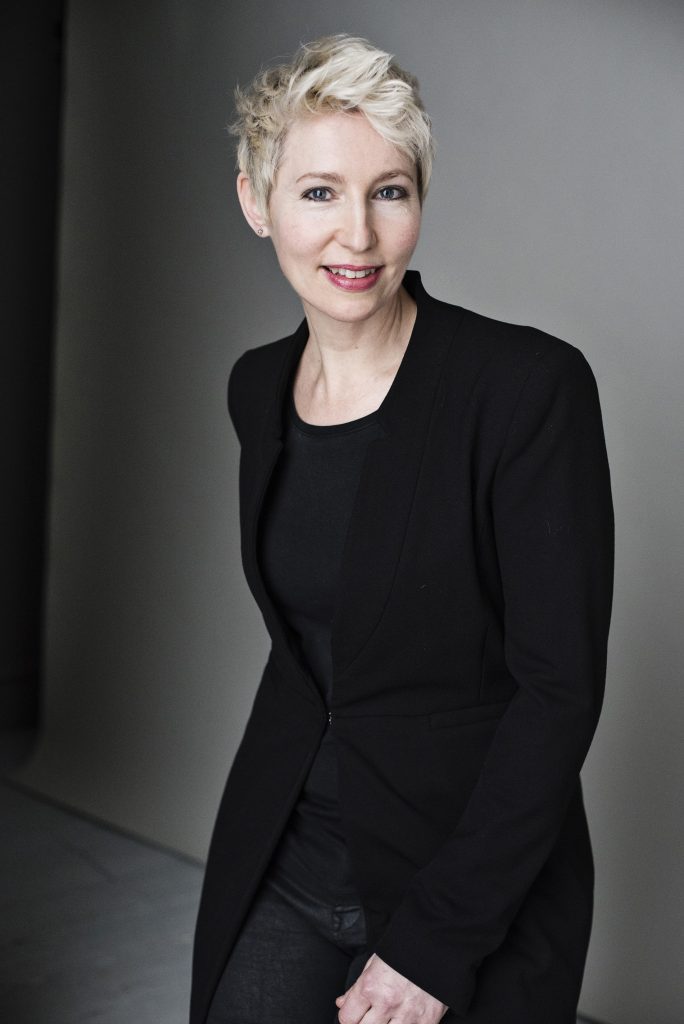 Jessica will be bringing the Eighties to life with her set.

“I work with a wonderful music director called Joseph Atkins and we work together a lot; we are quite often given challenging briefs by festivals, and we do it in our own way,” says Jessica.

“We are going to do a Queen song which we are going to do in an operatic way, whereas other songs we will strip right back and do in quite an intimate way but none of them will sound like how the original artists sang them.”

A special tribute will be paid to music legend Steven Sondheim who unfortunately, passed away during the Covid-19 pandemic. The festival will honour him and keep his memory alive with the concert.

Jessica adds: “We are doing a concert that was delayed because of the pandemic, Damian had always intended to do a 90th birthday concert for Steven Sondheim who was one of the greatest music writers of all time and when the pandemic happened, Steven has passed away so now the Sondheim concert is in honour of his death.”

Jessica is looking forward to performing on stage as a more normal way of living returns. After going through such a difficult time during the pandemic, she’s happy to see the arts industry moving forward.

“I was singing the day after lockdown lifted, which was last May 17 last year, wasn’t it? It’s been really difficult, that year that we all lost,” Jessica says.

“I made a couple of film projects with my collaborator just to keep going but it was very hard. I just kind of went straight back into it, I had festivals lined up last summer and I haven’t really stopped since. I’ve just come back from Rotterdam because I was doing a festival there which was exciting because I haven’t been out of the country since the pandemic.

“It really does make you value what you have. I have to say, it’s been a dreadful time for people in the live arts, and it’s wonderful to be up and running again, but it still feels a little bit tenuous, a little bit fragile.”

The Lichfield Festival does so much for the people of the city and more, it attracts those from all walks of life and Jessica focuses on the importance of events like this and how everyone can get involved incoming together for the city and each other.

“I think we’ve realised more than ever how important festivals are because they do bring people together,” Jessica says.

“I’m not a local artist, but I know that Damian does work with some local artists, which is fantastic, but I think that sort of continuity and for people to feel the sense of community is great because at Lichfield Festival you have your wonderful hosts who put up the artists as well and so they get involved in that way and all the volunteers and I think it’s really important for people to feel like they’re pulling together over something. It’s sociable and it’s something that everyone can enjoy together, there is something for everyone and that is hugely important.”

There will be events across the 10 days, from dance, comedy, theatre and family events for everyone to enjoy.
Jessica adds: “I would love for everyone to buy a ticket for something on each day of the festival because that’s what the festival needs; it needs everyone to step out and go and see things, we are out of the habit of it and people are still nervous I think about going for it.

For more details about the Lichfield Festival, visit www.lichfieldfestival.org