Lichfield-based wedding planner Jane Dayus-Hinch says the wedding can go on, and shares the details of her own small ceremony and celebration

In January 2019 we pre-booked Solitude, a 10-bed holiday home in Newtown in Wales, so that the family would be able to spend a week together over the Christmas holiday. Little did we know how things would transpire.

Three months later, whilst enjoying a weekend away at Pale Hall in Bala, Robert got down on one knee and changed my world.

During the following weeks of congratulations and well wishes the inevitable ‘when are you getting married?’ was asked time and time again.

As a wedding planner of 35 years I found the prospect of planning my own (second) wedding very daunting. I have planned and organised more than 2,000 weddings of every faith and culture and embraced every custom and tradition in the UK and across the world including in Estonia, Egypt, Canada, St Lucia, Dubai and the US. 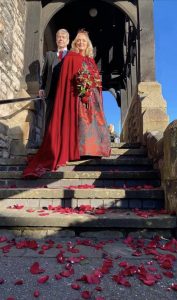 The happy couple pose for photographs on the steps of the church.

By the June we had decided we would do what we wanted to do and just have the immediate family at our wedding, and the only time that would be occurring was at our Christmas gathering that had already been planned.

We made enquiries at the local All Saints Church and met Canon Nia Wyn Morris who agreed to marry us by special licence, which meant we had to attend church six times prior to the December.

The wedding was booked for Christmas Day at 11.45am, immediately after the morning Eucharist service. We had already booked a family lunch in a private room at the local hotel, Maesmawr Hall. Then we made the decision to keep it secret and pull off the best surprise we could ever do for our family.

Why did we decide on the secrecy? It was for so many reasons. I have witnessed firsthand how stressed people become as soon as the word wedding is mentioned. Responsibilities, speeches, what to wear, who does what, the cost of everything and the weather. I didn’t want anyone to stress out, I wanted them to all enjoy the best Christmas and this was it. 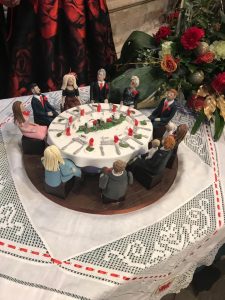 The wedding cake depicted each individual guest at the tiny reception.

I planned everything using local suppliers from the stationery, the flowers (using two florists), hairdresser etc and it gave me the opportunity to be a bride, seeing everything from the bride’s perspective.

We made many two-hour journeys to Wales and incorporated visits to see grandchildren and other family and it was such a happy time, with everyone blissfully unaware of what we were doing.

Being an older bride, I wasn’t going to wear traditional white. I was going to be married on Christmas Day and the colour theme started to come through as red.

I saw my gown while shopping for one of my brides who wanted an American-style bridesmaid’s dress, and it was there, in a fabulous wedding dress shop, hanging at the end of a rail. There was one dress, in my size and it was as simple as that. 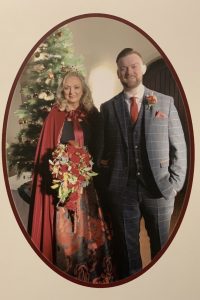 Jane was walked down the aisle by her son.

For my birthday Robert had bought me a pair of Louboutins and black became the secondary colour. Robert bought a new dark suit. We found his red rose tie and pocket square online and I bought him gold cufflinks for his birthday. We were enjoying choosing things together, designing the order of service, which I wrote, and the wording was in Welsh and English. Alice, the harpist, was a member of the congregation and she was thrilled to be asked to play for us.

Everyone was asked to pre-order what they wanted to eat for their Christmas Day lunch. As it was only 10 adults and two children we all enjoyed exactly what we wanted, including peanut butter cheesecake. Each individual menu was printed with their name on, which doubled up as their place card. We did have a menu and wine tasting prior and booked a bedroom to store everything in and for the children to have a nap if they needed to on the day.

Everyone was told that there was a formal dress code at the hotel and only suits, shirts and ties could be worn. This is how we got everyone to dress up for the church and photographs.

I took the time to hand make the crackers for the table with personalised gifts and I embroidered the cloth for the cake table with a Welsh dragon and made up two sacks of presents for the boys (aged four and two) to put under the tree in the room. There were printed candles as little gifts and we had a unity candle in church with the words to our song printed on it. When you have a small wedding you can personalise and do so many small finishing touches.

The wedding cake became the biggest focal point, with each guest sitting round the decorated oval table. I’ve known Carole Gregory, master cake baker, for almost 30 years and have recommended her to brides. I transported the cake on the front seat of my car. It was nerve wracking.

The sun shone on Christmas morning. There were blue skies and it was glorious. Everyone was up and dressed and we travelled into Newtown to the 10.30am service. We sang carols, said our prayers and received Communion. At the end of the service, when the congregation gathered at the back of the church for tea and coffee and a mince pie, I quickly popped into the vestry where the florist had delivered my bouquet of red roses and buttonholes and corsages for the ladies. I had help getting into my gown and heavy red velvet cape. I slipped into my shoes, put my bespoke red crystal tiara on and the excitement began.

Fraser, my son, was so surprised when I asked him to walk me down the aisle. The dream was now reality, the harpist played and the smiles grew bigger and bigger. We exchanged rings (handmade in Birmingham’s Jewellery Quarter) and everyone took photographs and recorded it all on their phones.

The only bit of silliness (which you have to have at some point in the day) was the snow machine outside Maesmawr Hall. The boys and I loved it! We had fake snowballs and it was great fun before we sat down to eat.

The fire was lit, the tree in the corner looked fabulous and the Wainscot Parlour was Christmas in a room! The florist from Welshpool had decorated the table in a Victorian style with red roses, poinsettias, cinnamon sticks and dried oranges in garlands. It was sumptuous and smelt divine.

The food was delicious, Robert made his speech and Fraser handed round the ceremonial Quaich and we were toasted. We finished off the wedding breakfast with outdoor sparklers (it was dark by 4pm) and afterwards we drove away with Just Married cans tied on the back of the car. We were in the hot tub by 7pm drinking champagne and, to us, we had a perfect ‘surprise’ wedding day!

Little did we know that in December 2019 we would be setting a trend for small, intimate, family weddings. Within 12 weeks we were in lockdown. The world of weddings changed in the blink of an eye. Weddings of 100 people or more were gone, being postponed, cancelled and couples were spinning with their wedding venues and suppliers.  As the weeks went on there was much confusion with cancelled wedding insurance and the re-booking and paying of more deposits.

As a wedding planner I am at the sharp end of ever changing Government guidelines and directives. Some couples are now going ahead with smaller numbers, with the promise of a big party sometime in the future when restrictions are lifted. I am seeing daily the closure of venues, florists, cake decorators and photographers finding other revenue sources and DJs and bands disappearing.  The wedding industry is in turmoil. A multi-million-pound industry that has gone online and couples are waiting…. for how long?

If you want to get married, just do it! Book a date and go to your local register office in your jeans and T-shirts. Complete the legal process and paperwork with two witnesses. Then book a wedding celebrant and write your own ceremony, vows, choose your music and plan your fabulous wedding day. Have exactly what you want, where you want (back garden, local beauty spot) with just the two of you. Make it special, make it memorable. Invite your closest family or friends to witness your special moments, once rules allow. Have it all photographed and recorded. Share it with extended family members and friends, you can even live stream to anyone overseas. I can help you with lots of ideas. We have to keep moving forward. Life is now. No-one knows what’s round the corner. You’re in love, you want to be married, pick a date, make it happen!

Jane Dayus-Hinch BA is a wedding and event planner, toastmaster and funeral celebrant. She is the host of the TV show Wedding SOS.