Like a Renaissance painter capturing women with flowing locks and enigmatic smiles or a pop artist depicting tins of soup, Peter Davis is representing a moment in time when he has his portrait subjects pose with their mobile phone in their hand.

Peter, who was born and raised in Birmingham, is keen to stress that he isn’t passing judgment on people for using devices, merely including devices as they are now as integral a part of a person’s being as the clothes they wear or the style they choose for their hair.

“Most of my work has a person on their phone or using a technological device of some kind. It’s something that we stop seeing when we look at other people, it’s just become so normal, but when we see it depicted in art we do see it because it’s unexpected in art. The role of an artist is to put a mirror up to society. I’m enjoying doing that. 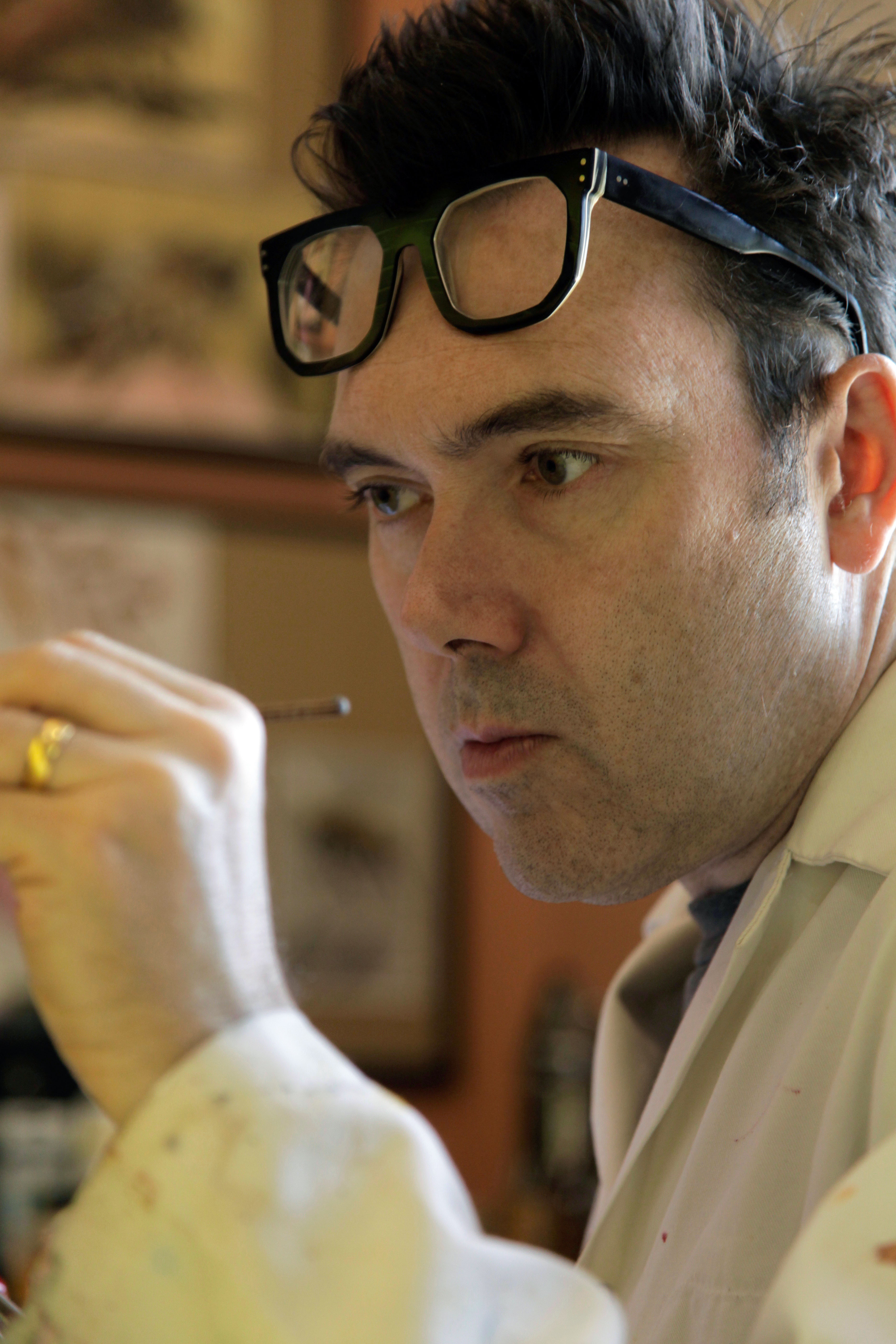 “If you went back 20 years and said everyone was going to have this thing they’d be glued to and that they’d be living a digital life we wouldn’t have thought that would happen.

“The rate at which society has changed is fascinating, but I don’t see it as a negative. I see it as a moment in time and it’s lovely to document it.”

The 50-something has just had his work selected for the John Moores Painting Prize exhibition at the Walker Art Gallery in Liverpool, the equivalent of receiving an Oscar nomination in the art world.

It’s the UK’s most celebrated and well-known painting competition, with past winners including Patrick Heron, David Hockney, Euan Uglow and Peter Doig.

“I’m thrilled to have been selected,” he says. “There were more than 3,000 entries this year and only 67 paintings were selected for the show.

“It’s an honour to participate as it showcases the best of what British contemporary painters are doing.” 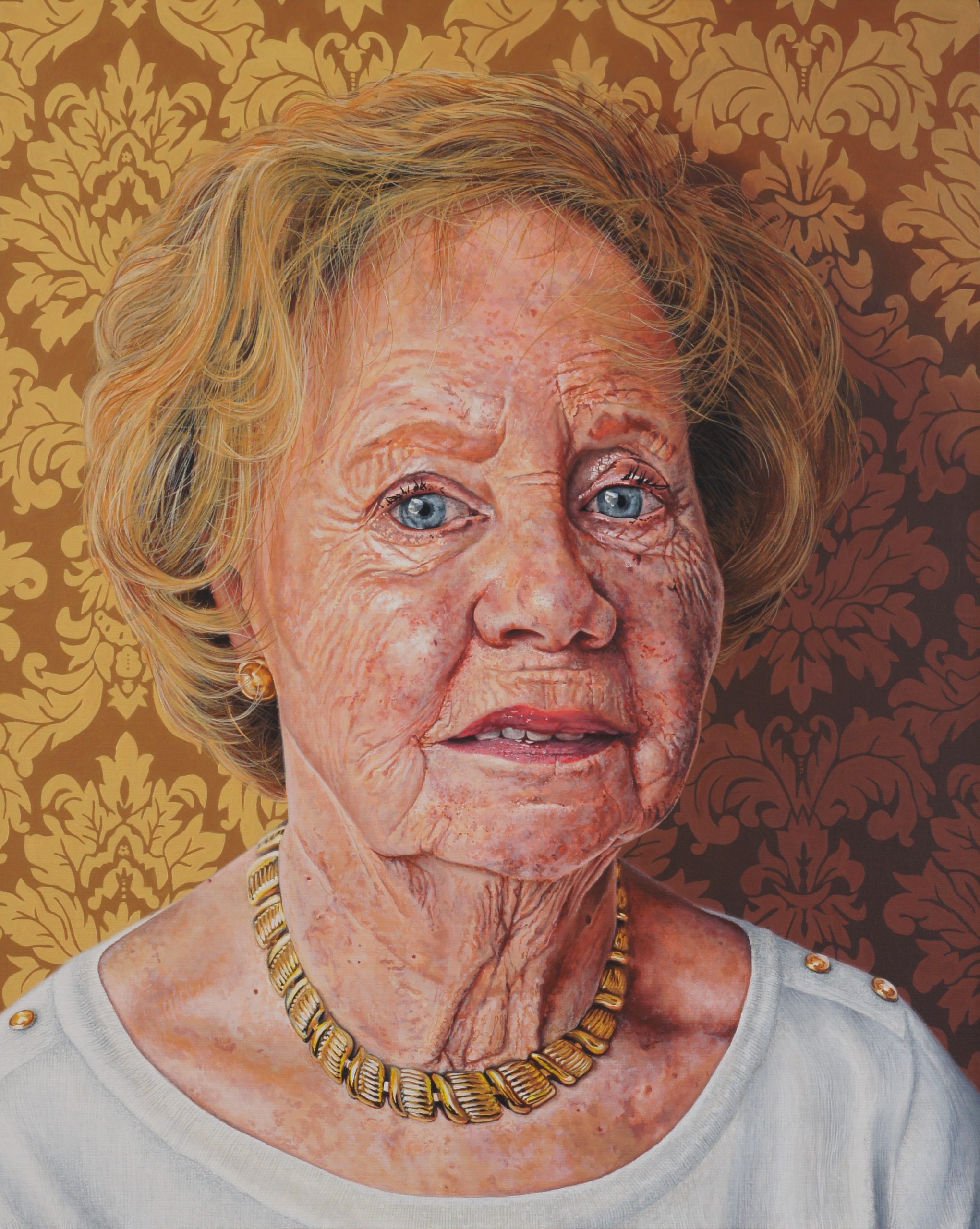 The selected painting, Wetin Dey, is a portrait of Solomon Onaolapo, a music producer and co-founder of Rising Stars North West, a community project that provides support for aspiring young musicians who are disadvantaged and unable to afford a rehearsal and recording space themselves. Wetin dey is a Nigerian greeting meaning “Hey, what’s going on?”

It isn’t Peter’s first experience of art awards. He won first prize in the Three Counties Open Exhibition in 2017 with Golden Girl, his portrait of Joyce Richards from Walsall. The same painting won a prize at the RBSA Gallery in Birmingham in 2018.

Peter studied at Manchester Polytechnic School of Art before a career as an art director in the advertising industry.

“As time went on, more and more of the work I was doing in advertising was aimed at people accessing it on their devices and on phones, by using technology,” he says. 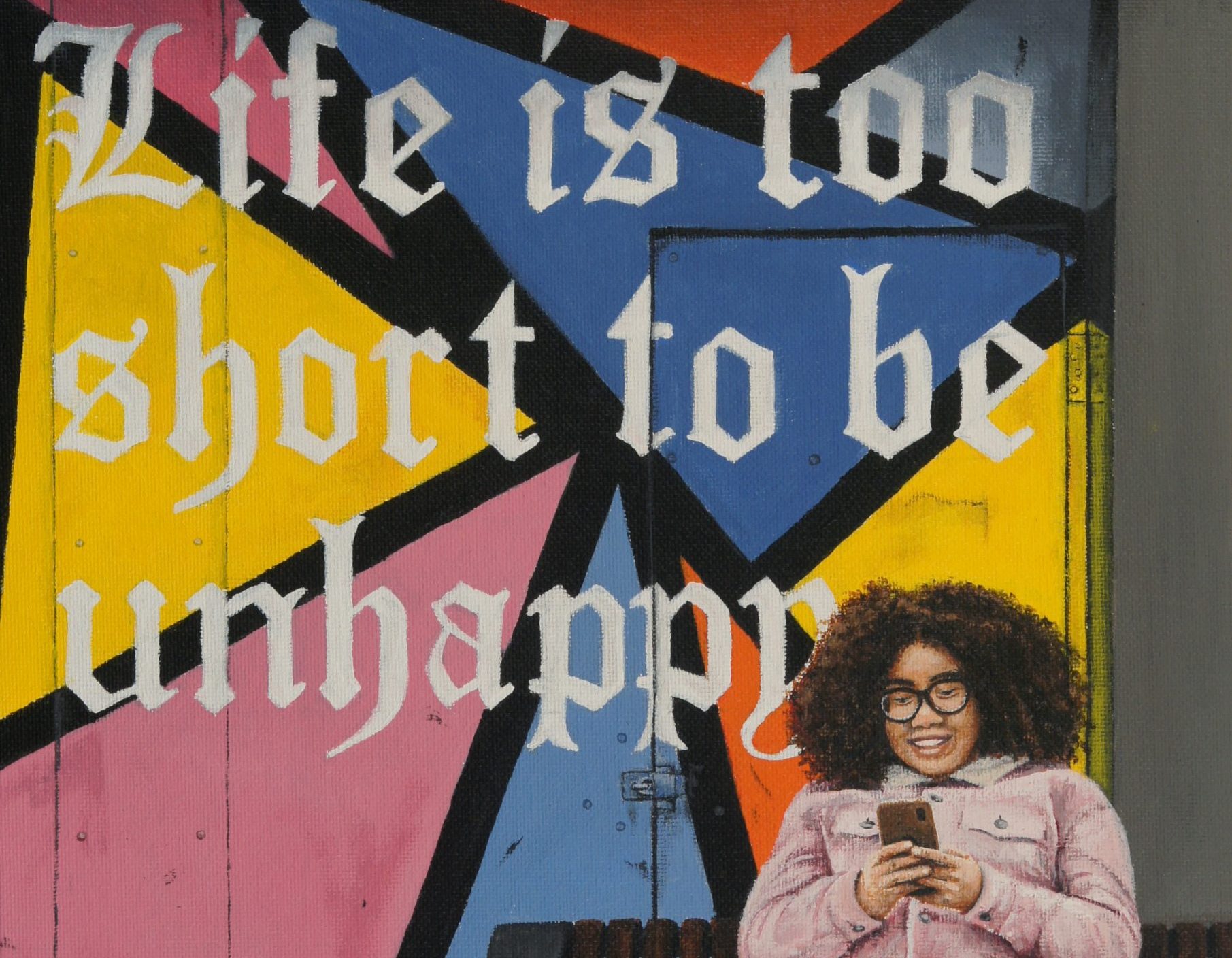 Peter’s new series of urban landscapes includes Life is Too Short to be Unhappy, which features a brightly coloured panel on a derelict building in Hanley, North Staffordshire.

“As I migrated into becoming a fulltime professional artist the idea of people using technology became a fascination for me. 10 to 15 years ago there was a seismic shift with technology.”

A contemporary portrait painter, Peter’s work became more difficult when the pandemic prevented him from having sittings with his subjects.

So instead he started to develop a new series capturing urban landscapes, including in Life is Too Short to be Unhappy, which features a brightly coloured panel on a derelict building in Hanley, North Staffordshire.

“I walked past one day and saw this wonderfully uplifting statement and Mondrian-style pattern and just felt compelled to capture it in a painting.” he says.

“My urban landscapes look at our communities, towns and cities. They also usually have somebody in there on their device.

“They’re very ordinary scenes that people might look at and say ‘that’s just life’, but for me it’s like looking at amazing photographs from the 1950s and 60s. I’m documenting it because I think it’s amazing.

“As an artist it’s up to me to look at these things with a fresh set of eyes. I’m looking at modern life and documenting it.”

You can visit the John Moores Painting Prize exhibition virtually at  https://www.liverpoolmuseums.org.uk/jmpp/john-moores-painting-prize

Peter is  represented by Barewall Gallery and you can see more of his work at https://www.barewall.co.uk