The English Indian are turning their challenges into strengths and staying true to their roots, as co-founder Anna Riley tells Katy Edgington

The English Indian is beloved across the West Midlands and beyond for its simple but delicious street food – and rightfully so. This is their sixth year of pleasing crowds via the comforting familiarity of fish and chips with an Indian twist: pakora battered cod goujons, chaat masala chips, mint and chilli mushy peas, delicious curry sauce, a wedge of lime and fresh coriander.

After featuring The English Indian early on in their journey, we caught up with co-founder Anna Riley to find out what’s new and how the business has fared through the turmoil and uncertainty of the last couple of years. Anna has a hospitality and business management degree, and worked in human resources before running a successful clothes shop in Lichfield for 11-and-a-half years.

James Lant, Anna’s partner and co-founder, has always had a passion for food, cooking the most amazing chicken and naan breads in a tandoor oven in their garden at home. In 2014, exploring alternatives to his day job, the pair hosted a series of pop-up curry nights at a local pub. But it was when they ate at Digbeth Dining Club they realised there was potential to do something a little different.

“We did traditional Indian street food for about a year,” explains Anna. “Our food was delicious, and it was a unique product that nobody in the market knew about, which was part of its downfall. We just weren’t doing the numbers, so we had to go back to the drawing board.”

It was only in 2016 that the couple came up with the idea for Indian-inspired fish and chips – and it was an immediate hit. In 2017, they won the People’s Choice award at The British Street Food Awards, their first two-star Great Taste Award for their signature mushy peas came in 2019, and in 2020 they won the title of Best UK Mobile Operator at the National Fish and Chip Awards. They even opened a London food truck franchise, but, like many independent businesses, have had to fight to weather the storms of the past two years.

Everything came crashing down

“Things are starting to settle down, but for the last few years every single week has been different,” says Anna. “When lockdown hit in March 2020, our calendar and our London franchise’s calendar were wiped out. We went from having too many events to none. We were really worried – we thought we were going to lose the business. Everything came crashing down.”

Luckily, with a chef as a longstanding member of the team and a history of making tasty curries, The English Indian was able to quickly pivot to a chilled curry home delivery service. They did this for 14 weeks, saving the business from going under in the process. As soon as  restrictions allowed them to get the food vans back out, the team developed their own click and collect service. Despite finding a way to roll with the punches, the pandemic has undoubtedly had a lasting impact.

“Prior to Covid-19 we were on a real trajectory,” Anna relates. “It was really exciting. We were thinking about franchising across the UK. We had one franchise in place for a year, but we just couldn’t make it work with all the difficulties everyone has had. So we’ve pulled back from that idea for the moment.

“It’s been a really tricky time and it’s still not ending, with the war [in Ukraine]and inflation. We use soya oil and the price has gone up so much. They’re putting restrictions on how much we can buy. Our whole business is dependent on oil, gas and electricity. I’m sure we’ll be okay, but it’s been a long hard slog. Thankfully, we’ve got a really strong foundation.”

A time for positive changes

Far from being deterred, Anna and James have taken the opportunity to make positive changes to the way they operate, particularly around sustainability. Although they’ve used biodegradable serveware for a while, always recycle their used cooking oil, and ensure their product is zero food waste, Anna is still looking to improve the businesses’ green credentials. One important new development is their vegan menu.

“For a while now I’ve been concerned as to our heavy reliance on cod,” says Anna. “Being fished as heavily as it is, it hasn’t sat very well with me because of what that does to the oceans. So we’re trying to find an alternative to cod. Our vegan pakora-battered artichoke is delicious. It comes in a brine that has a vinegary undertone to it, so it works perfectly as ‘fish’ and chips.” 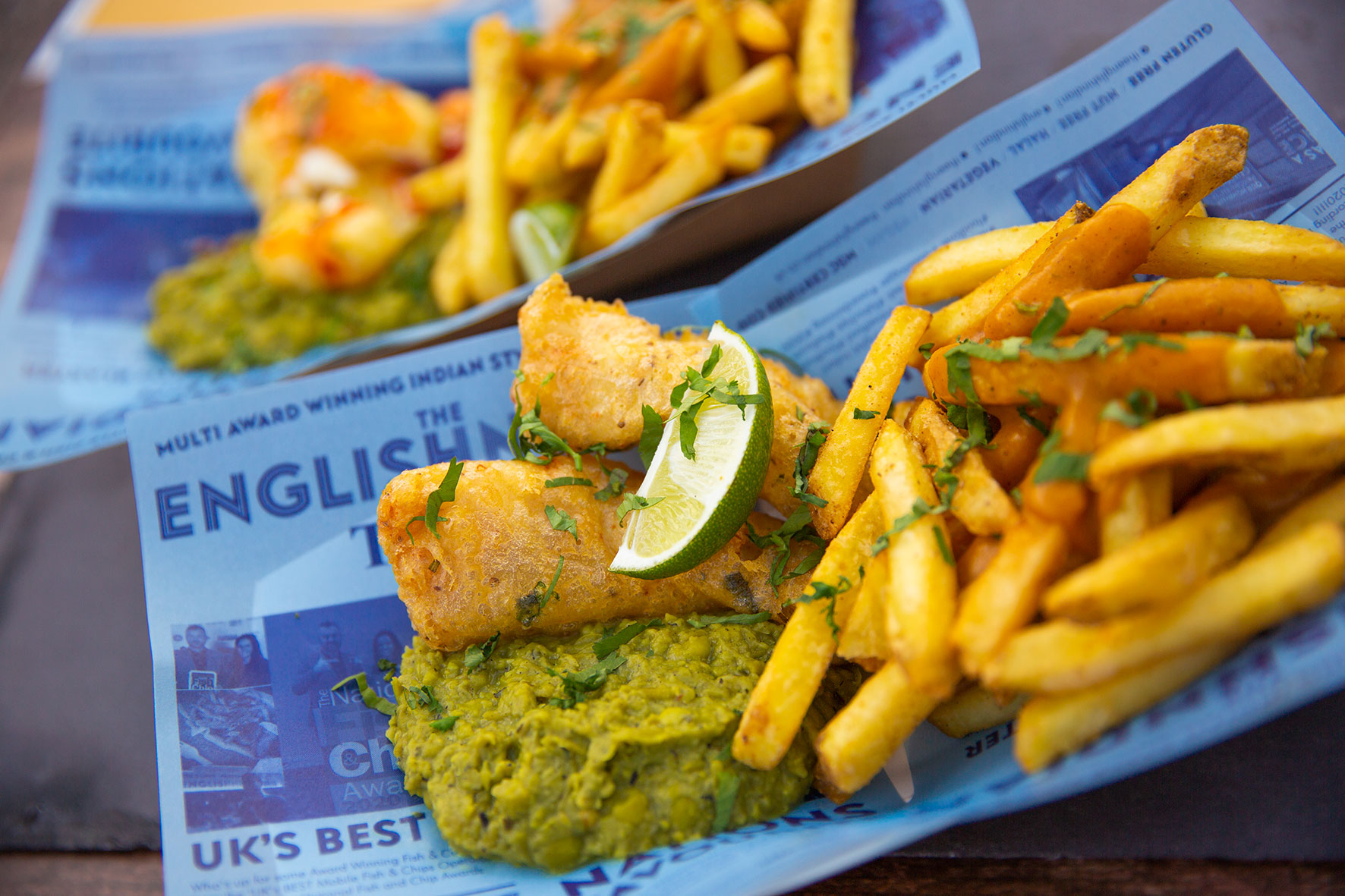 The English Indians fish and chips with a twist

While they don’t plan to stop serving cod – fish and chips is their forte, after all – she’s hoping as time goes on that their vegetarian halloumi and vegan artichoke options will start to outsell it. The team is already looking forward to some exclusively vegan and vegetarian events that are in the diary for 2022.

The English Indian has also been collaborating with Coeliac UK and Allergen Companions to make their offering known to people who struggle to eat out because of their allergies. Everything on their menu was already gluten free, but Anna and James have made additional changes to make sure they’re as allergen free as possible and help every customer enjoy delicious food.

Looking to the future

In an industry where there’s so much competition, what sets The English Indian apart and makes it successful? Anna believes sticking to their guns with a fuss-free menu they can serve quickly, at high volume, without compromising on their high standards, is the key. As well as being sticklers for quality and customer service, of course.

“I want to know when the customer isn’t happy,” she says. “It’s amazing to hear how much people love the food, and in the early days you do need that, but now I want to know when it isn’t right. I think it’s really important as a business owner to take – even to welcome – criticism.”

Although street food is where The English Indian started out and they have no plans to quit the scene completely, Anna confesses that the industry is a little bit trickier than it used to be. Corporate events are where their business is really starting to flourish, post-pandemic. They’ve been booked by Porsche, for example, for client family days, and will also be part of JCB’s 75th birthday celebrations.

“We’re starting to get a solid base of corporations that are rebooking us year-on-year for things like staff rewards, new product launches and even enticing people back to the office! Schools have been approaching us, too. A lot of organisations are keen to have some form of gathering, and obviously having it outside reduces the risk of infection.”

Festivals and Fridays in Lichfield

The English Indian team has a packed festival and events season on the horizon. They will be at Glastonbury again this year, Womad, Wilderness, and Bearded Theory at Catton Park. They’re also hoping to do more regular trade closer to home. The English Indian’s Lichfield headquarters on Shires Industrial Estate has recently had a revamp in preparation for a busy spring and summer. 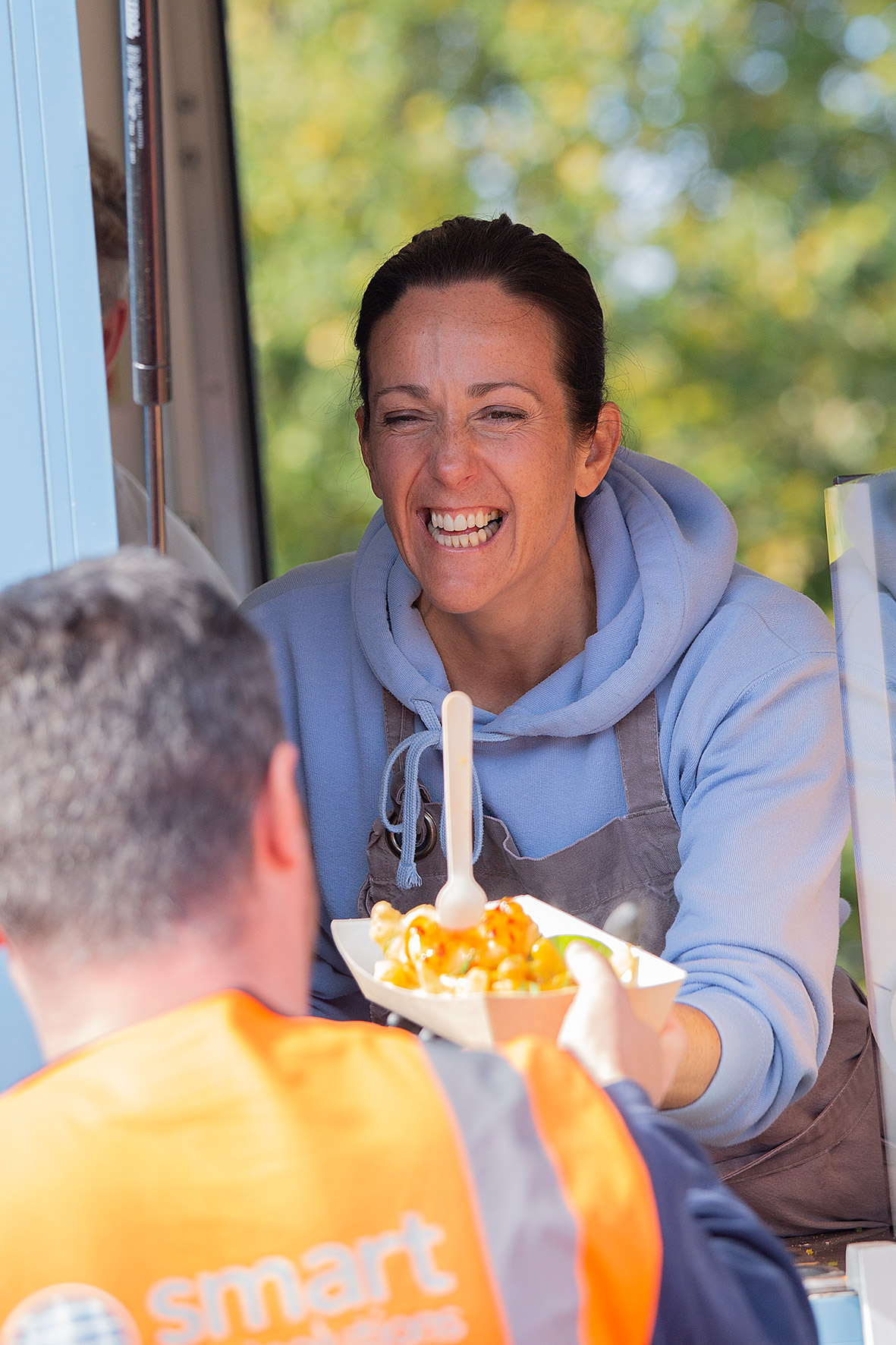 Anna’s looking forward to opening on Fridays in Lichfield

“We’ve got so many lovely, loyal customers,” says Anna when I ask if it’s different serving up food in their hometown. “We love opening up on a Friday. Throughout May, and possibly most of June, we’re hoping to open every Friday here and maybe move away from click and collect. With Trinity Brewery open across the road, it works really well.”

It may have been a rocky road to get to this point, but Anna is upbeat and optimistic about where The English Indian is at right now and where it’s heading.

“Once we’re ready to progress again a bit more aggressively, all those internal things that probably needed our attention before will have been looked at,” she says. “Systems, processes, procedures – we’re making improvements everywhere that take time you don’t necessarily have when you’re flat out at events. So, I think in the end it’s going to strengthen us.”

If you want to catch The English Indian this spring and summer, find their weekly whereabouts on Facebook and Instagram, or use the ‘find us’ feature on their website www.theenglishindian.co.uk