The National Open Youth Orchestra (NOYO) was launched back in September 2018. Its aims? To promote musical excellence and support 11-25 year old disabled and non-disabled musicians to come together as members of an inclusive ensemble. And it’s a world first.

After more than two years of delays and disappointments due to the Covid-19 pandemic, NOYO will perform their first ever series of concerts this spring and summer, kicking off in London at the end of April followed by May performances in Bristol and Poole. You can catch them at Birmingham Town Hall on Sunday, June 5 for the fourth and final date.

Although there are now many organisations working to provide opportunities for disabled musicians to develop their and to play, generations of young people have missed out on that chance. That’s why NOYO co-founder and Musical Director Doug Bott says the orchestra was set up with two key purposes in mind.

“First, we wanted to provide a practical progression route for young disabled people who have a precocious musical talent, but who may face barriers to developing that talent through more conventional youth orchestras.

“The second is to provide a youth orchestra which can perform in public, shining as a beacon of opportunity to give people around the country and the world a clear sense of what young disabled people can achieve as musicians, to raise aspirations.”

Applications to join NOYO open every March. They’re open to 11-25 year old disabled and non-disabled musicians. Some recruits come straight in as full members, while others who show potential but require a little more time and development, are brought on as trainees. Though they don’t perform in concerts, they do get to develop their skills.

Under the auspices of Open Up Music, NOYO is delivered through regional centres in London, Bournemouth, Bristol, and Birmingham – the newest of the four. Birmingham NOYO Centre is run in partnership with Midlands Arts Centre (MAC), a contemporary arts centre and charity in Cannon Hill Park, education and training charity Services For Education, and music charity B:Music.

The support to excel

Currently there are just three young people at the Birmingham centre, but the team are hoping to boost numbers through the 2022 audition process. Holly Radford-James is a producer at MAC. She manages the partnership between Open Up Music, B:Music and Services for Education, and explains why this is the case.

“We’ve started off very small so that we can really get to know the young people within our centre and make sure that the offer and the rehearsals are bespoke to their needs, the way they work and how they make music.

“NOYO has a fantastic pastoral support officer, Ben, who has worked alongside the young people on their personal development plans and to get a really good idea of what they’re interested in, what their ambitions are, where they might need extra support and what they’re really flourishing in. We’ve been working with Ben to support that development with our music leader and assistant music leader within the rehearsals.”

The young musicians take part in 10 regional rehearsals over the course of a year and come together with their peers from across the UK at an Easter residential to rehearse and have fun.

Music as you’ve never heard it

Quite unusually in the orchestral world, NOYO takes on board the views of its members in the music commissioning process. This year they will present a beautiful new co-commissioned work, ‘What Fear We Then?’ by Alexander Campkin, who is himself a disabled composer.

Jamie, a saxophonist in the orchestra says: “One of the most rewarding aspects of NOYO is feeling like an active participant in the music we play. All too often, in a lot of other music groups, you tend to play from the same repertoire of classical and romantic and baroque pieces, and the interpretations and expressions of that music will either be based on how every other orchestra has played these pieces, or how the conductor thinks it should be played.

“It’s amazing playing a piece that has only been composed in the past few years, having a living composer who could talk to us about his feelings behind the piece and not only give feedback, but also listen to our suggestions.” 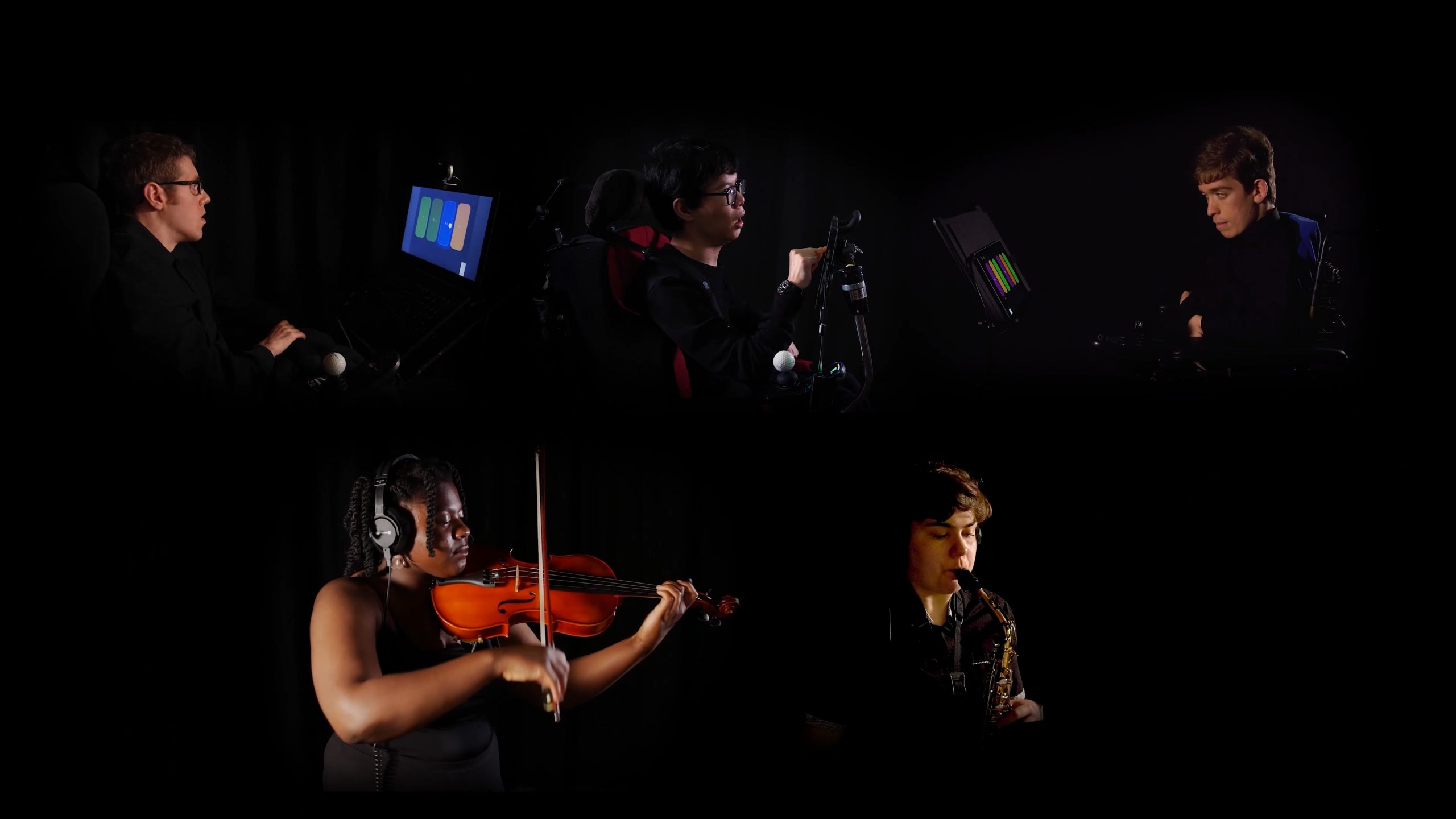 This focus on the young people over the music is necessary, Doug explains, as each year there is a cohort of players who might play very diverse instruments and come from very diverse backgrounds. They’re not necessarily in a position to simply play a standard piece of music. So the process starts with understanding who they are, what they want to play, and how they are going to play it.

“When we commission music, we don’t commission it for set instruments,” Doug adds. “We commission composers to create music with lots of different parts which we can then adapt to whichever instruments we have. This has the potential to reinvigorate classical music across the board, not only for young people but also professionally.”

Traditional orchestral instruments like the violin, viola, cello, trumpet, French horn, and percussion are represented in the ensemble, but so too are the saxophone and electric guitar. Plus there are three interesting electronic instruments played by members of the orchestra: the clarion, which can be played with any part of the musician’s body, and the beautifully expressive Linnstrument and Seaboard Rise.

With NOYO the first of its kind in the world, we asked Holly and Doug what more they think can be done to level the playing field for disabled and non-disabled musicians.

“I think reimagining what we see as ‘excellence’ based on modern standards will help, because there won’t be the same expectations put on young people that stop them being able to access opportunities,” says Holly. “And looking at things from an equity point of view rather than an equality point of view. What can we be doing to support those people who have larger barriers in place?”

“My experience of music education, and I think a lot of other people would echo this, is it’s all about music first in order to generate excellence, and you as a person come second,” Doug responds. “We believe if you’re going to develop musical excellence – and NOYO really is about musical excellence – you have to engage with the person first and understand who they are, what they want to achieve, and how best they can achieve that.

“In so much of this work, the approaches we learn to take to be accessible and inclusive for disabled people have universal benefits for everybody. If we can get it right for disabled people and if that can filter through to music education and the professional industry more widely, that’s a good thing.”

Every NOYO concert is relaxed and suitable for a neurodiverse audience, as well as those who benefit from a more informal setting. Adjustments include dimmed lights, a dedicated chillout space for quiet time before or during the performance, and a relaxed attitude to noise and audience movement. Everyone is encouraged to come and have their expectations of a classical concert challenged.

“Our musicians are really excited,” Holly says. “And we’re very proud that we’re going to host one of the concerts in Birmingham Town Hall. It’s such an iconic venue. If you’ve never taken your children to see a concert before, how amazing would it be for their first experience of classical music to see contemporary music played by a disabled-led orchestra?” 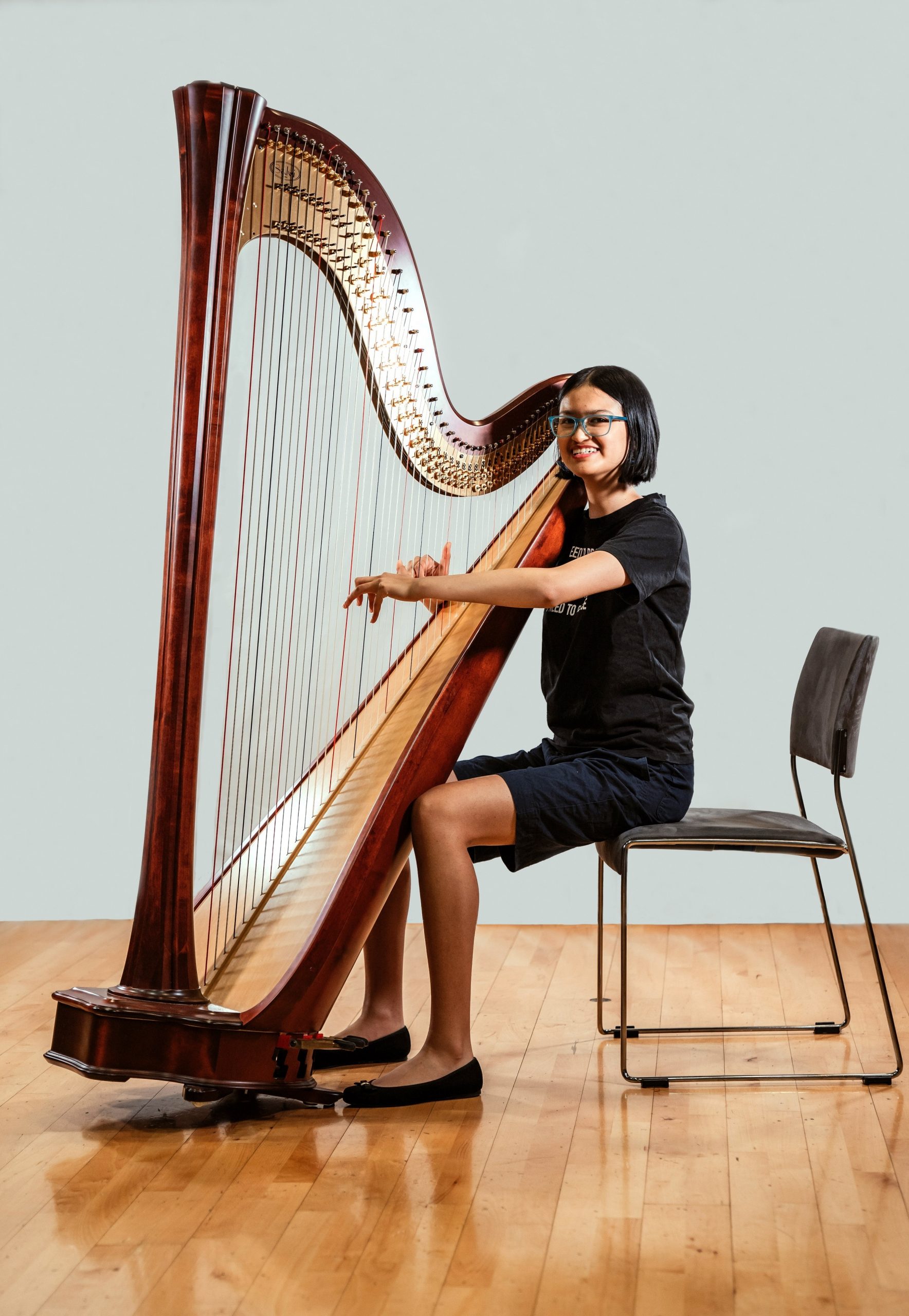 NOYO harpist Holli, who is also studying at the Birmingham Royal Conservatoire, echoes Holly’s sentiments: “I like the word influential to describe NOYO because there aren’t other orchestras, youth ones, who are as passionate about showing disabled people can play on the same stages as non-disabled people.

“‘Creative’ is another really good word. Lots of the music we play, you wouldn’t really get that in a stereotypical classical music concert. We believe that it’s best if disabled and non-disabled musicians can integrate together, and then we can come up with fresh new ideas and be more creative, explore different parts of music. We can be more free with the music… Come to our concert. I’ll see you there!”

Tickets for the Sunday, June 5 concert at Birmingham Town Hall are available from bmusic.co.uk