Some of Britain’s most coveted postage stamps are due to go under the hammer in Staffordshire.

The collection includes many philatelic treasures which show how a quirk of fate can transform what was once everyday paraphernalia into sought-after rarities.

Richard Winterton Auctioneers’ Stamps & Postal History Sale will be broadcast online live from The Lichfield Auction Centre on Thursday, May 13, starting at 9.30am.

It includes fine and rare Great Britain stamps together with a large collection of postcards relating to Cumbria and the Lake District.

An original 1840 Twopenny Blue used to post a letter to Hawkshead. The stamp bears an 1844 frank, with markings for Keswick sorting office and a back-stamp for Ambleside on the wrapper.

Highlights include an 1840 Twopenny Blue – the world’s second official postage stamp – on the original wrapper, estimated to fetch £500.

The wrapper housed a letter posted to Hawkshead and bears an 1844 cancellation franking, suggesting the original purchaser of the stamp kept it in a drawer unused for four years.

The original 2d blue was only printed between May and August 1840 and had long been replaced by an upgraded design by the time it was finally franked in 1844. 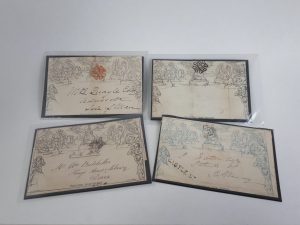 The grandiose design of the Mulready pre-paid postal stationary was soon scrapped.

Except for its denomination, the design of the 1840 2d blue matches the Penny Black and it was struck from the same die, although copies of the 2d stamp are significantly rarer than its 1d sibling.

“When you have a rare stamp with the wrong postmark on an attractive wrapper complete with back-stamps and seal, all the elements really have come together to create a rare beastie indeed,” said philately specialist Phil Ives.

“It is part of a wonderful early GB collection with an emphasis on quality.” 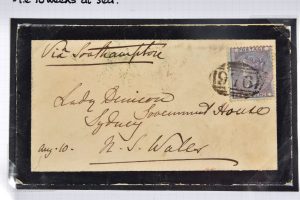 This 1857 sixpenny lilac on azure paper spent 10 weeks at sea as it was used to post a letter from Windermere all the way to Sydney.

Printed for less than a year, the stamp came in imperforate sheets which had to be hand-cut with big scissors. Consequently, examples with four clear margins are rare.

Of the 68 million Penny Blacks printed, just 168,000 were produced from the 11th – and final – plate. Lot 11 in the sale is such a stamp. It has a certificate of authentication and is expected to sell for £600 but could fetch a four-figure sum.

“This is a particularly nice example of a Penny Black – all its margins are complete and the paper is bright and fresh,” said Phil Ives.

“If you want a plate 11 Penny Black, there aren’t many opportunities to acquire one.”

The Lichfield auction also includes numerous Mulready stationary – the world’s first pre-paid postal stationary, named after the artist William Mulready who was commissioned to illustrate it.

Issued parallel with the Penny Black in 1840 and effectively an elaborate frank indicating that postage had been paid, the Mulready was initially expected to be more popular than postage stamps.

But the stamp prevailed as the grandiose design was lampooned, leading to the stationary’s premature and ignominious demise.

Other desirable stamps in the sale include an example of the first sixpence, an 1857 6d pale lilac on experimental ‘azure’ paper, which has a BPA certificate and is estimated to make £400 to £600.

This stamp spent 10 weeks at sea as it was used to post a letter from Windermere all the way to Sydney in Australia via London and Southampton.

There is also a mint £1 1929 stamp, which was sufficient to cover the cost of airmail.

“The 1929 £1 is a real beauty – a stunning design and this example is fresh and clean,” added Phil Ives.

“What’s incredible is that somebody paid all that money for it and then did nothing with it.”

Postal history in the auction includes 4,500 postcards showcasing Cumbria’s rich history and heritage from the Edwardian era to the mid-20th century.

Carefully catalogued and beautifully presented, the archive ranges from transport – including Sir Malcom Campbell’s Blue Bird K4 on Coniston Water in August 1939 – and day-to-day working practices to evocative images of the Lake District.