Suspended high in the air, upside down in a silk hammock-like rope, I’m attempting to get to grips with my first experience of aerial skills.

My daughter Ivy, not yet two, giggles as she watches mummy sway and swing, hair and limbs flying. It feels incredibly freeing.Then it’s her turn. Nestled safely in the silk she swings and spins, laughing with glee before attempting to wiggle out, landing squarely on the huge, squishy mat below. 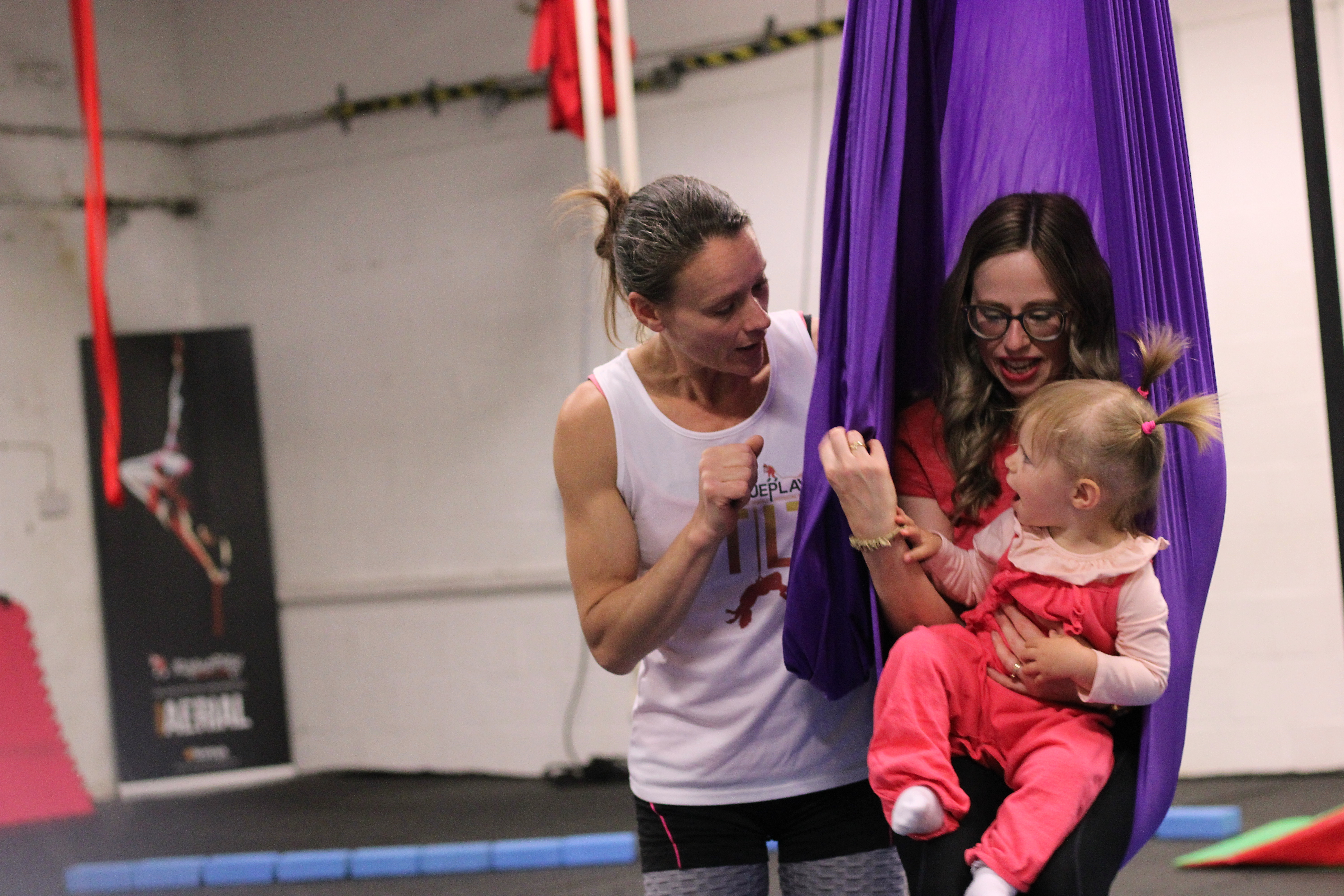 Kim will be running parent and child sessions at TILT.

We’re in Birmingham at the West Midlands Circus and Creation Centre for a parent and child workshop, run by expert aerialist Kim Wildborne. The founder of circus skills-based physical theatre companyRoguePlay Theatre and mum-of-two, Kim is a passionate advocate of what she terms ‘risky’ play from a young age

Risky play, says Kim, has endless benefits for children and parents alike, challenging young ones to push their limits, explore their bodies and take risks in a safe environment.

“I was funded by the Arts Council to research the benefits of risky play for the brain development of children and young people,” says Kim. “There’s a real demonstration of how playing with speed, playing with heights and allowing children to take risks really helps them in later life when it comes to risk assessing; they become much better at problem-solving and understanding risk and knowing their limitations while not being afraid to push them a bit.”
Kim’s parent and child sessions were developed when her son Milo, now five, was born. From the age of six months, Kim worked out ways to involve him in her practice, rather than trying to distract him while she carried on.
“I wanted to do something that was for the parents, in particular, but that their child could enjoy their first experience of flying as well,” says Kim. “It was about creating a workout for the parent, but in a safe, accessible space for the children too“
We’ve made the space as child-friendly as possible, with the sandpit area, lots of toys and lots of things to engage children so their parents and carers can take some time to focus on themselves.” 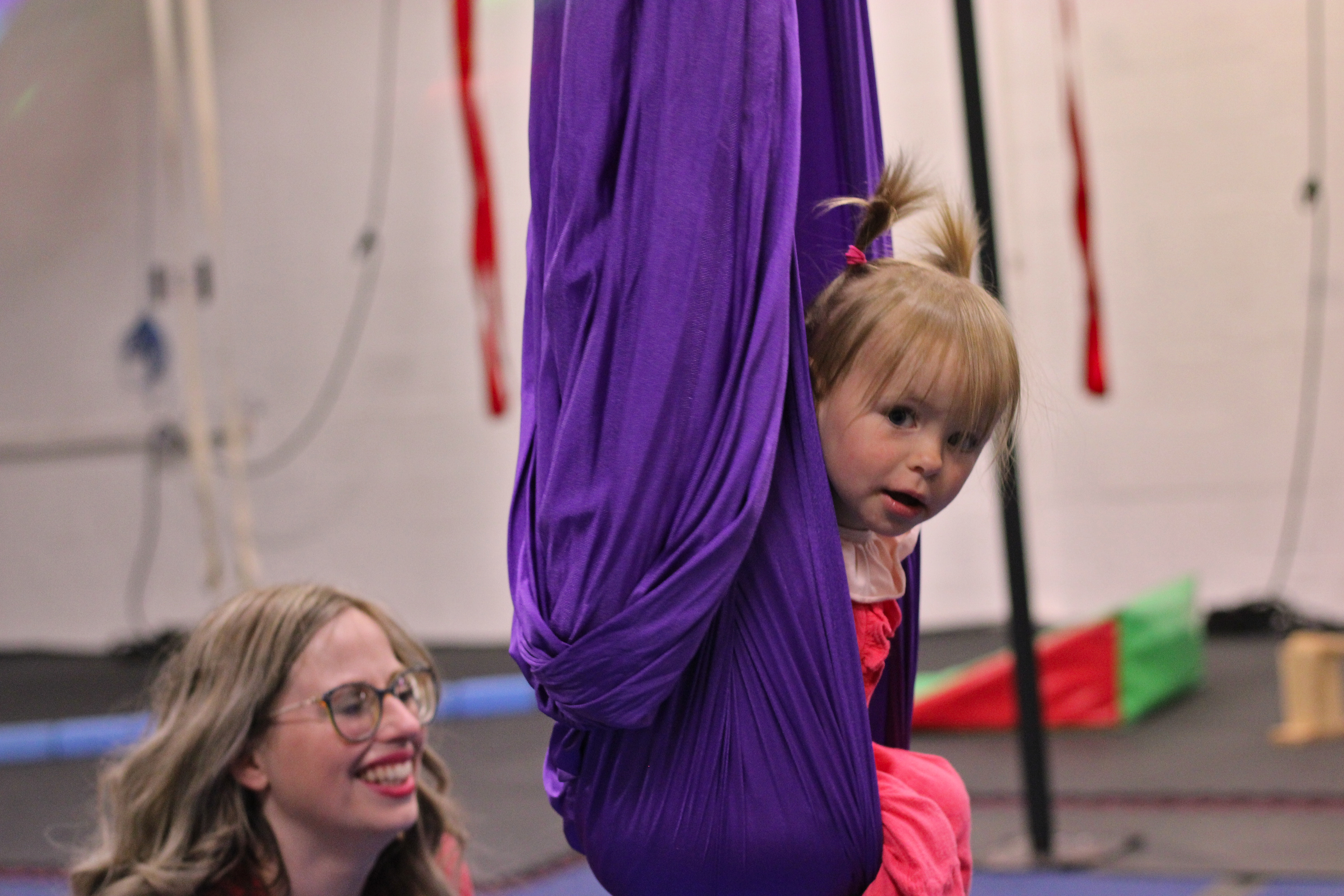 Risky play is a great way to develop confidence.

Anyone who wants to give it a go will get the opportunity next month as TILT Festival gets underway at RoguePlay Theatre’s West Midlands Circus and Creation Centre, in the heart of Digbeth. TILT is the highlight of RoguePlay’s calendar; a unique celebration of circus arts and physical theatre where a whole raft of international performers not only showcase their skills, but are on hand to teach a series of workshops aimed at all levels, from complete beginner to seasoned aerialist.

“For us, it has always been and will always be about generating an open, friendly, awesome-sauce environment in which everyone is welcome and everyone can fly,” says Kim. “Anyone from grandparents to babies are welcome, beginners to professionals, abled and differently abled, no matter who or where you are, our doors are open to you. Oh, and we have plenty of great coffee and cake!”

Kicking off on August 1, the first five days of the festival focus on performances and masterclasses with some of the best in the business. Experts in disciplines from silk and hoops to straps, rope, Chinese pole and more, will be teaching workshops, culminating in the TILTED Circus Night on Friday, August 6 – a truly stunning night of live circus physical theatre performance from jaw dropping performers from all over the world. This night promises to be a corker, with everything from five-minute circus acts to new shows.

And for TILT22, the most ambitious festival in its seven-year history, the programme will be offered as a hybrid between in-person and online workshops and shows.

“We normally have renowned circus artists from all over the world, but because we’re still dealing with Covid-related travel issues, and also Brexit, we’re streaming those who are from outside the UK for a hybrid programme, so you can still train with those people but they’ll be Zoomed in,” explains Kim.

Saturday, August 6 sees the festival’s family day, with a whole host of family events both indoors and outdoors. From the colourful and acrobatic retelling of Jules Verne’s classic Around the World in 80 Days which sensitively introduces young audiences to environmental issues, to the fabulous Fairy Dust Party and family disco, as well as Kim’s parent and child aerial risky play sessions, there promises to be something to engage and delight all members of the family. 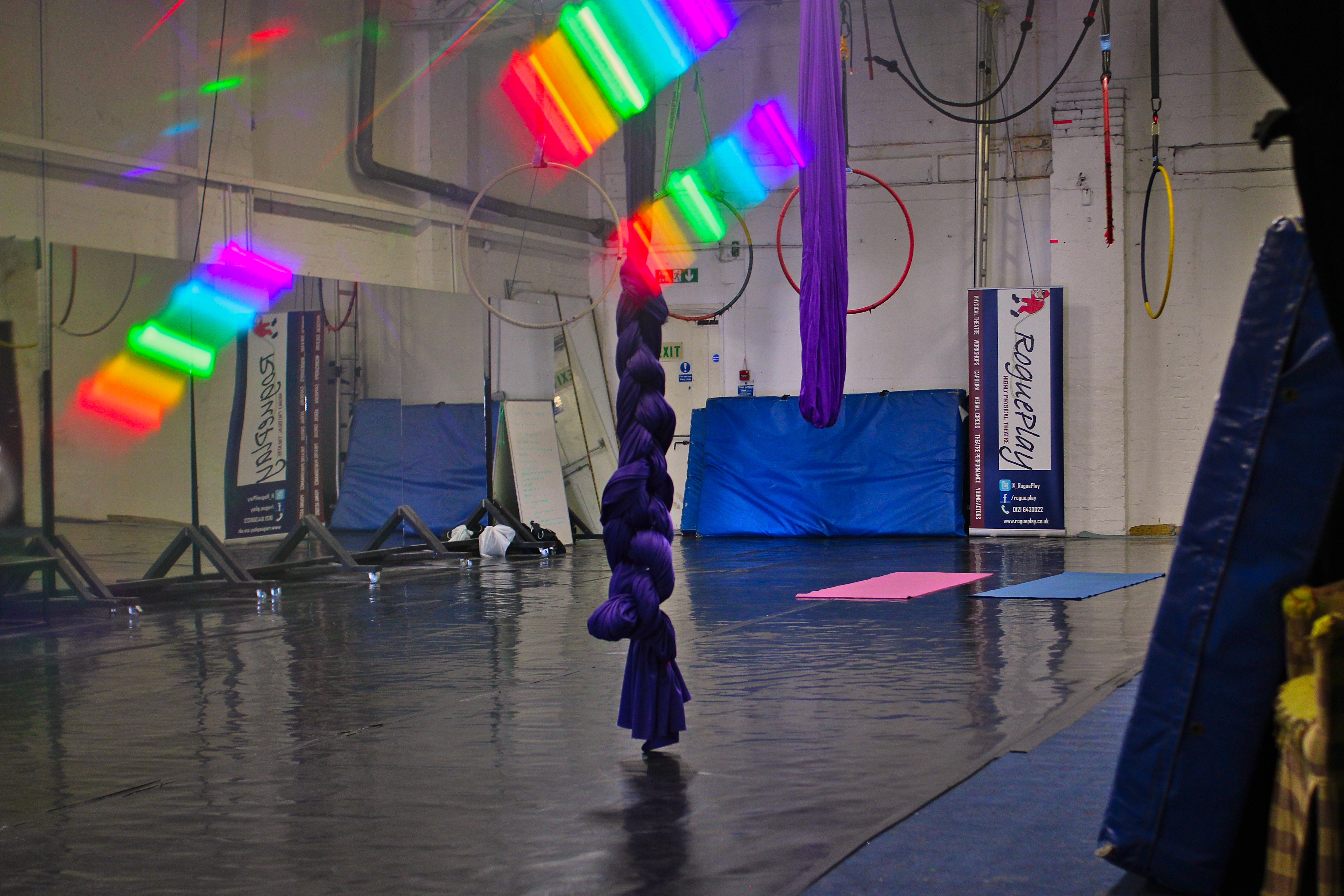 The Rogueplay Theatre studio space will be home to TILT Festival.

“On Sunday we’ll be running our first aerial film festival,” says Kim. “Last year was the first time we showed films as part of the festival, and that partly came about because of Covid restrictions, but actually there are a lot of people who have produced film not only inspired by Covid but because that was one of the ways an artistic outlet was happening throughout Covid.

“We’ve had quite a few different submissions for the film festival, and there will be prizes for the different categories.”

The second week of the festival sees Young TILT, aimed at seven to 14-year-olds, where the professional teachers offer classes and workshops for a younger audience – in keeping with the festival’s family-oriented ethos.

After the restrictions on last year’s festival due to the pandemic, Kim is excited to be back to offering an eclectic in-person programme.

“TILT Festival has a really nice family feel, and because of the social distancing and reduction in numbers because of the restrictions last year, it was much quieter than normal so it will be really nice to have so many people back in the space again,” she says.

“During the week we turn our bay outside into a cafe space where we serve food and coffee. It’s a great place to relax, and we put up hammocks so people can come and chill out. It’ll just be really nice to be able to do that again.”

It’s set to be an exceptionally busy summer for Kim and the RoguePlay team. As well as organising her own major festival, Kim was approached to get involved with Birmingham’s Commonwealth Games. As a result, you’ll be able to catch Kim performing to a global television audience during the Games’ opening ceremony.

“All of the circus elements you’ll see in the opening ceremony will be delivered by RoguePlay,” says Kim. “We were approached by the organisers to get involved, and while I can’t say anything about the creative content yet, we’ll be hanging around in lots of different ways!”

The Commonwealth Games have meant that TILT Festival has been pushed back from its usual July slot to August. 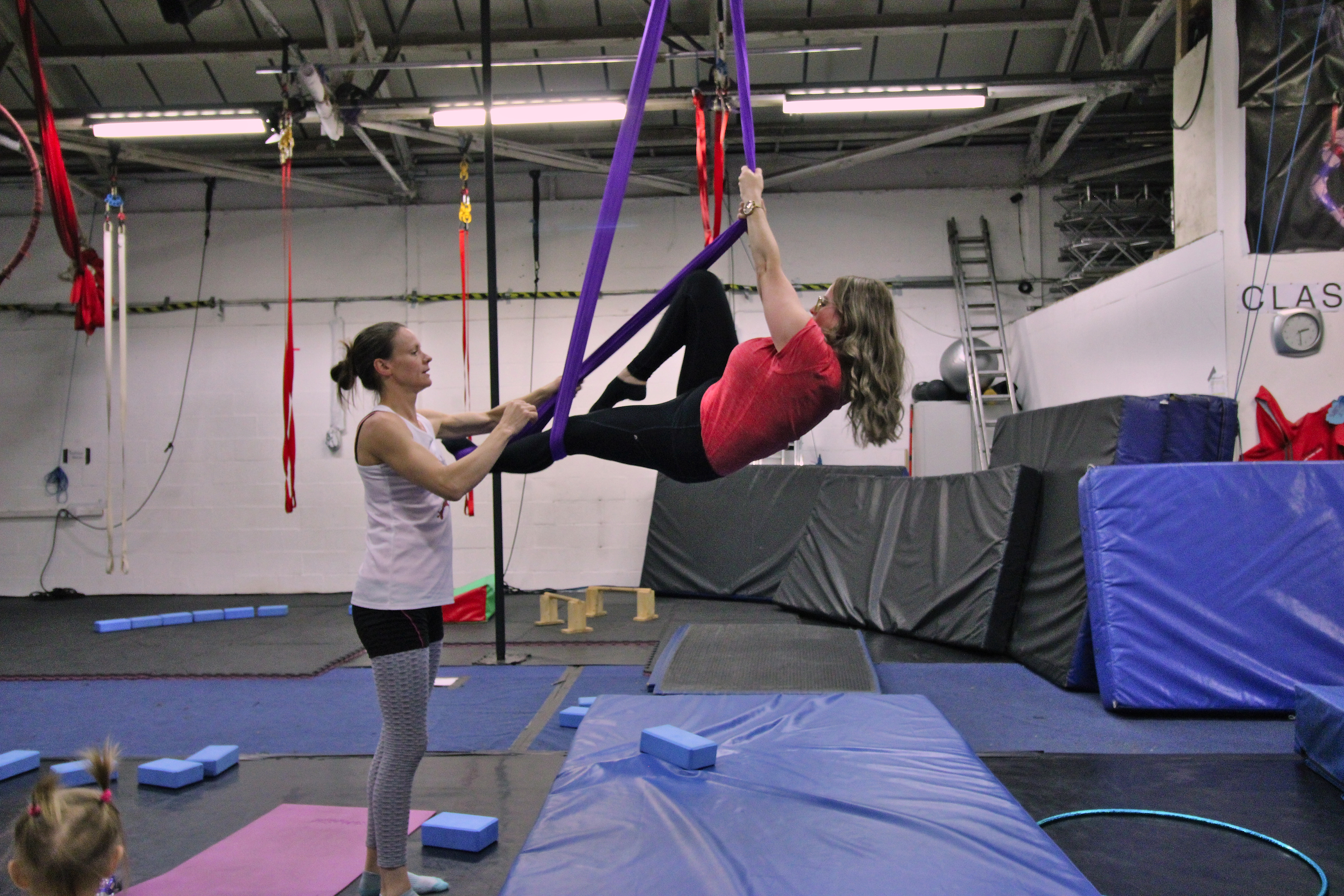 Kim puts Amy through her paces while Ivy watches.

Kim will also be heading to the prestigious Edinburgh Festival from August 16 to 28 with an intensely personal project which she has been working on for several years.

A solo show, Mother Tree is a highly physical piece combining theatre, aerial silk and spoken word about the ecosystem created behind closed doors, and what the forest can teach us about ourselves.

“It’s about maternal mental health and the journey through motherhood,” says Kim. “The show was originally called Sleepless; I wrote it when my son was quite young and I was very sleep deprived. But then as he grew up and I had another child, I realised there’s more to this motherhood lark than just sleep deprivation!

“There’s an expectation on women to just carry on as you were before, and it might feel like the child is a burden, not necessarily to the parent but in other ways. Like if I take my kids with me to a workshop it feels like I have to excuse it, but actually it needs to become more the norm; this is me, I come with kids.”

Mother Tree finds connection between the amazing cooperation, memory and healing of the oldest trees and our own incredible journey through motherhood.

“It’s a very personal work,” says Kim. “I kept a diary when I was up at all hours feeding my babies, and then as my kids got older, and the show came from that. It’s my personal journey of motherhood, but also universal.”