If there’s one thing in life that is always a good idea, it’s cake. It might be difficult to agree on which flavour is best, but one thing for certain is cake will never let us down. West Midlands-based sales and events executive by day and baker by night, Simrit Kaur Bachu turned to baking to help her through a challenging time in her life-unexpectedly developing her passion into a sought-after business, Simi Bakes. 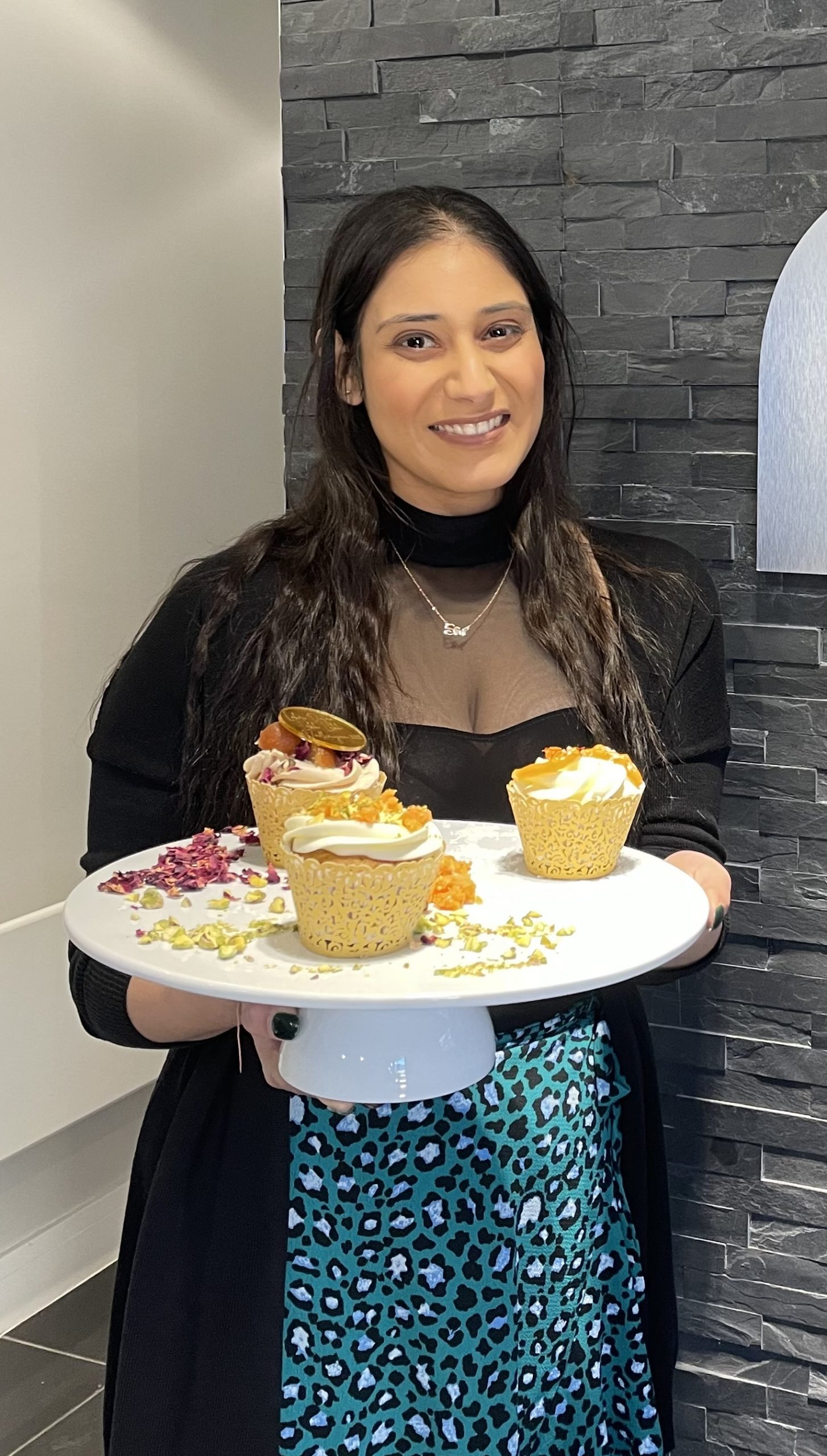 “Simi Bakes was created by accident, I had no intention for it to become what it has,” says Simi. “Baking for me started during my childhood; at school I’d make cookies, then me and my sister would bake at home, it was something we always loved doing but it followed through with me then as I got older I would watch The Great British Bake Off and Mary Berry or Paul Hollywood and thought I’d try out their recipes  because they’d look so tasty.

When Simi started facing some obstacles when it came to her mental health, she began to broaden her baking as a way to escape.

“It slowly became my therapy, I went through some difficulty with my mental health and baking, for me, gave me that escapism and it became my little happy place,  just me being able to bake,” Simi says. 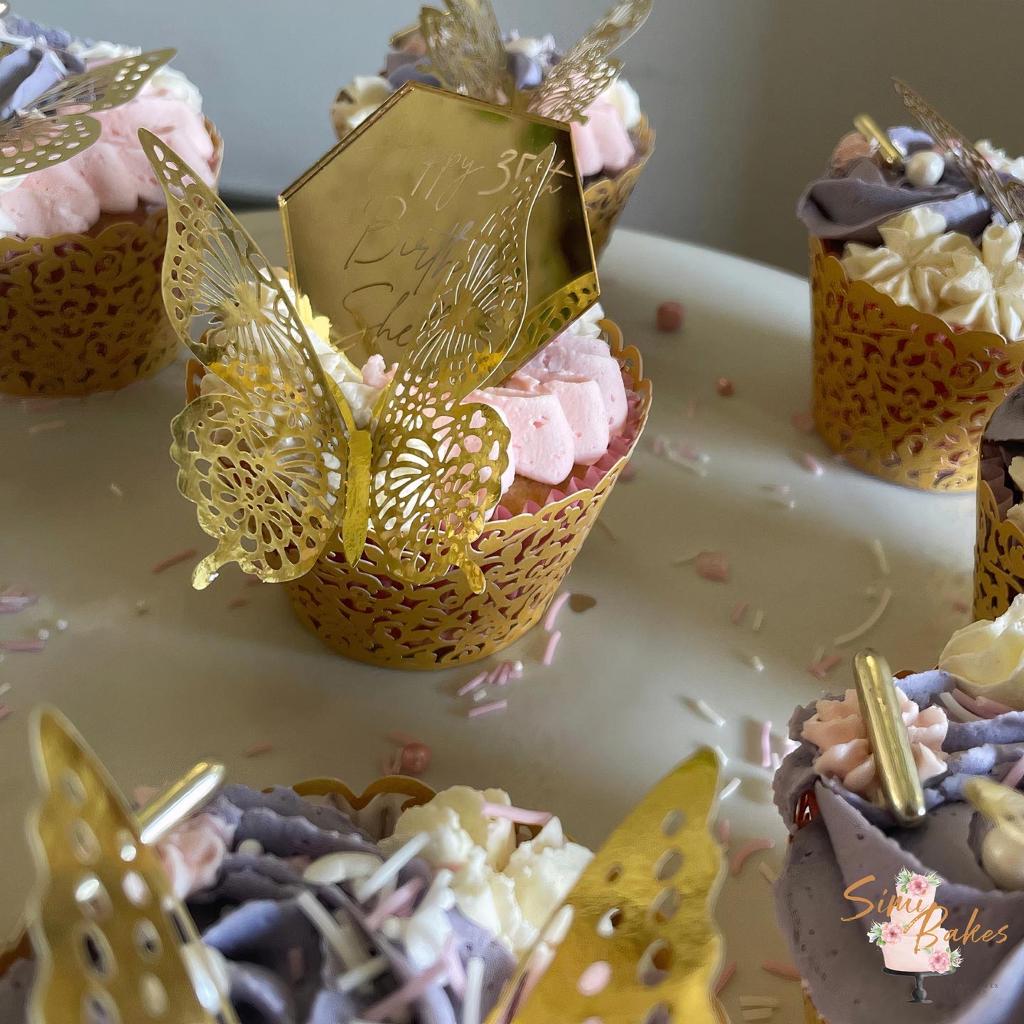 Beautiful cupcakes are a signature bake.

“Every time I used to bake, I would take cakes into the office and my colleagues would say you should post about it online and start an Instagram page, then eventually in 2018 I started a page but it was just a place where every time I would bake, I’d take a picture and post it, it was nothing professional at all, it was like an online scrapbook.

“Then in 2020 when the pandemic hit, I was put on furlough and for a short while I did really struggle with my mental health, after spending so much time improving myself, it was a lot to take in.

“I had so much free time which I wasn’t used to because of my job so I decided to go back to baking. Every week I’d make something new, it was either cupcakes, or a pie, or a cheesecake and I would post about it. Then one of my friends messaged me and asked me to bake a cake for her and it started from there. During the pandemic people couldn’t access cakes and bakes as much so they took to social media to get them.

”Baking had long provided a place of respite for Simi, and working on her delicious bakes was her way of helping her mental health.

“Having grown up with a lot of anxiety, I didn’t really tell anybody and the baking was an outlet for me, the place where I was happy but without me even knowing,” she explains.

“It was more during my adult life, so my early 20s where things came to the forefront and my mental health did deteriorate a lot and I realised the only place I found solace and escapism was when I was baking. It just released so many feelings and thoughts for me, I remember my therapist telling me to find something I enjoy, and baking became that enjoyment of just being me and able to grow in my own place.

“Whenever I do have those instances where I might be having a not so good day my first thought is to bake a cake because any negativity I can turn into a positive through my baking. It’s not a switch where you can turn it on and off but it becomes a coping mechanism; baking for me doesn’t solve your problems but it brings you back to Earth where you can think more clearly.” 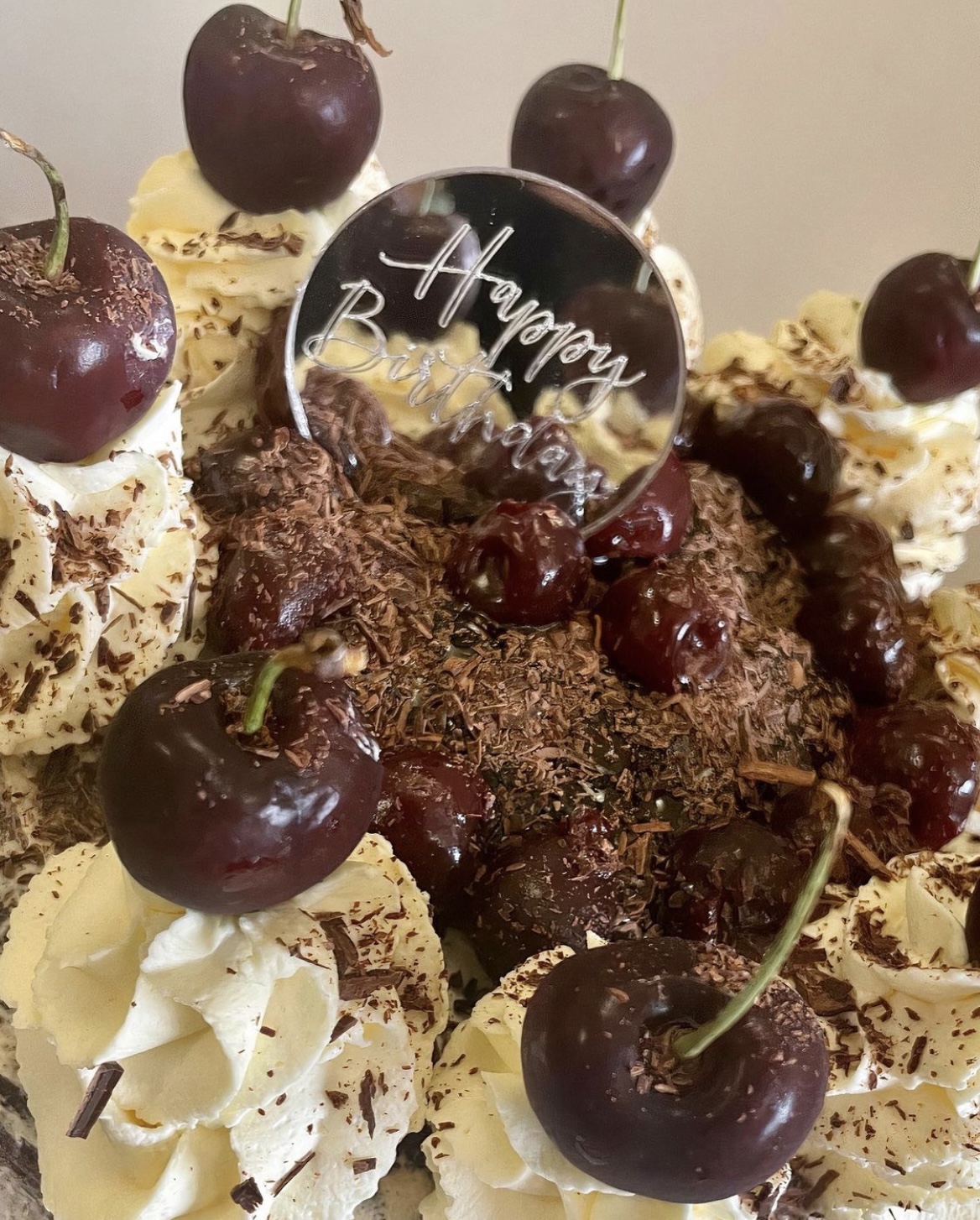 Simi says she has one classic recipe which she loves to bake and uplifts her, which also happens to be a regular among her customers. She’s also seen a shift in catering for different dietary requirements – with all recipes coming Simi-approved.

“My go-to recipe is my lemon drizzle cake, it’s also one of my popular bakes that people ask for,” she says.

“I create recipes from scratch, I cater for gluten-free, vegan and vegetarian customers too and have noticed a demand in these more recently; it’s so important that I can bake for everyone, so we are all included.

“When I was creating bakes for certain dietary requirements, I needed to make sure they were just as tasty as my regular bakes, so I made loads of batches to make sure it’s perfect and I’d watch the oven as they bake, thinking is it rising? Is it working? Of course, me and my family would test them and only when they’re perfect, I will say yes, this is the final recipe.

Some bakers like to stick to traditional recipes, some take inspiration from different foods, travel or what they’ve eaten in a restaurant but in Simi’s case it was during the time of Diwali, the festival of light, where typically friends and family gift traditional Indian sweets, it got her thinking and she decided to merge two things together. 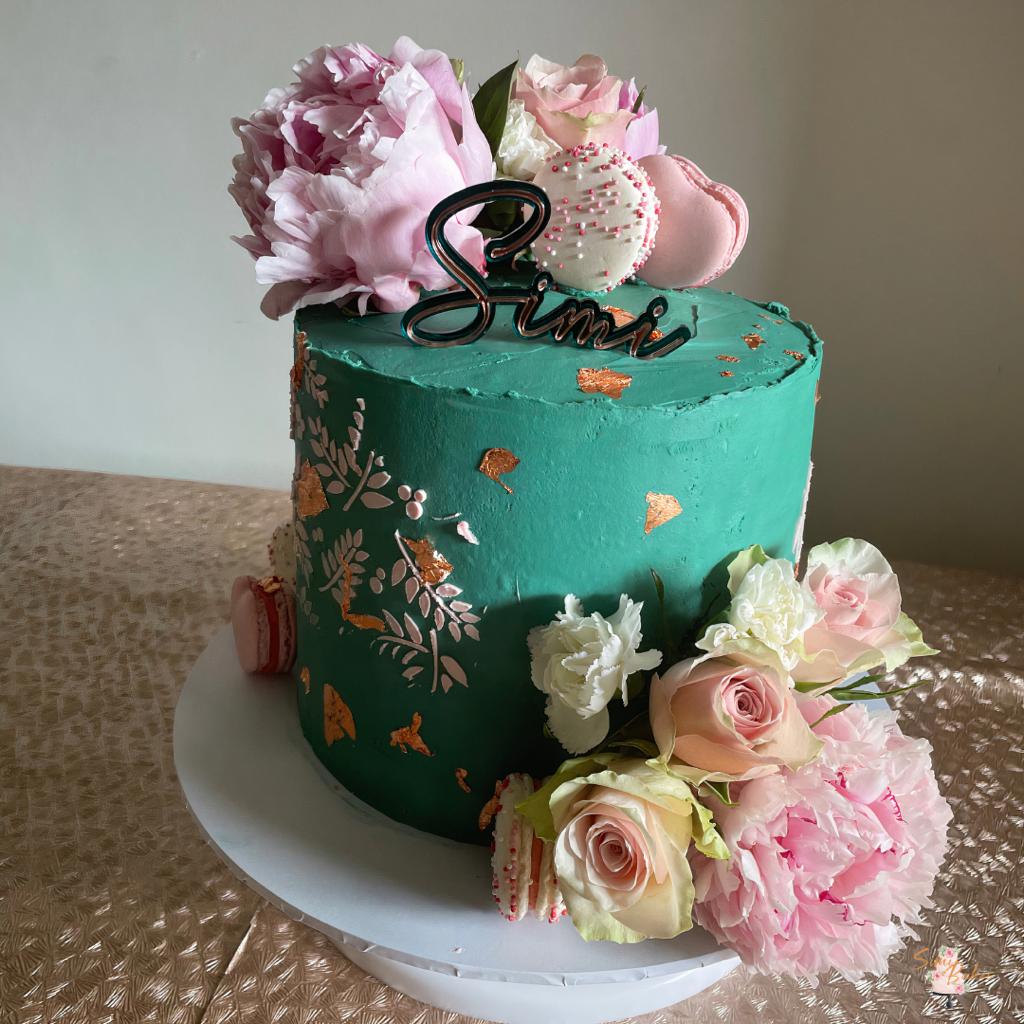 “I love experimenting, playing around with flavours and you have your classics which you can’t go wrong with, but I like being a bit risky with some and creating my own unique cakes,” Simi says.

“During Diwali 2020, my parents were talking about gift-giving for the festival and they wanted different things, so I went into my own world and thought about putting an Asian twist to my cupcakes. The first person I spoke to about it was my boss at work and his first comment was about the sweetness because as you know Indian sweets are very sugary, but I was going to experiment, so the flavours were balanced but very much still there.”

After hearing about the conversation between her parents, it got Simi thinking about her own culture, background and past experiences and she decided to take this as inspiration to incorporate into developing her very own cupcake recipes.

“For me it was about bringing the essence of the flavour into the cupcake and incorporating the Indian sweets, traditionally called ‘mithai’. I went to the drawing board and thought about traditional flavours such as rose water, cardamom, saffron, things that I grew up tasting in all types of food and drink.

“Tea is a huge part of our culture, whenever you go to someone’s house there will be a lovely cup of masala chai and a sweet treat waiting and I thought I have to put tea in at least one of the cakes. I gauged what flavours would work and then I developed the recipes, I went through countless batches and when I got the right one I decided to give them to my work colleagues to test and try, from there, the new range was born and it worked out really well.”

Simi’s three final flavours were Gulab Jaman (dough balls in syrup) and Masala Chai, Gajar Ka Halwa (sweet carrot pudding) and Cardamom, and the third was a Jalebi (crispy, fried rounds in a sugar syrup) with Coconut and Saffron.

“It was never my intention to make money from cakes, it started off as my release point, then posting pictures online, making cakes for family and friends and developing into people getting in touch with me to bake for their occasions,” Simi adds.

“After the pandemic, I decided to take my baking more seriously; there was a lot of demand and I thought I could make something of this. I love baking, it is a part of me, it’s my happy place.

For more on Simi Bakes, visit her Instagram page @simi_bakes

Here, SImi shares one of her favourite recipes for lemon drizzle cake:

For the drizzle topping

Line a loaf tin with grease proof paper and preheat the oven to gas mark 4/180C.

Beat together your butter and caster sugar until pale and creamy. Add your eggs, one at a time, slowly mixing through.Sift in the self-raising flour, then add the lemon zest and mix until well combined. Spoon the mixture into the tin and level the top with a spoon. Bake for 45-50 mins until a thin skewer inserted into the centre of the cake comes out clean.

While the cake is cooling in its tin, mix together the lemon juice and caster sugar to make the drizzle. Prick the warm cake all over with a skewer or fork, then pour over the drizzle–the juice will sink in and the sugar will form a lovely, crisp topping. 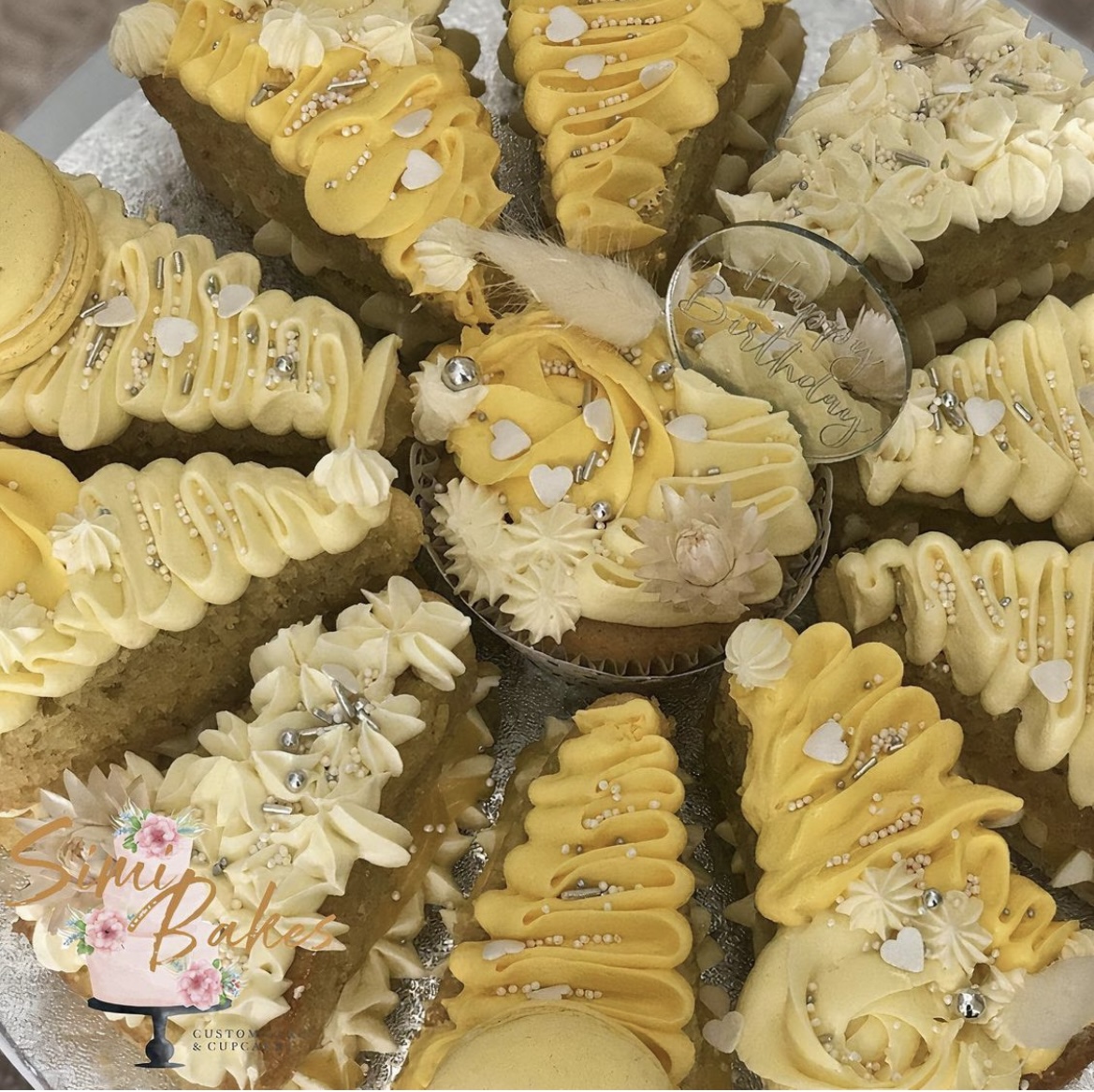