The weekend of the International Cheese and Dairy Awards and Love Cheese Live, hosted in Staffordshire this year for the very first time, finally came around. Katy Edgington brings you all the highlights

Following on from a busy trade day on Thursday 21, which saw hundreds of judges assemble to judge thousands of award entries, Love Cheese Live opened its doors on Friday 22 in Staffordshire County Showground’s Bingley Hall. Hundreds of exhibitors and a cast of well-known chefs welcomed the public to meet, eat, learn and shop across a packed two-day programme of demos, talks and tastings.

We caught up with Saturday Kitchen’s Matt Tebbutt shortly after his demo on the Saputo stage on Friday afternoon. Matt made kapsilon, a dish originating from Rotterdam in the early 2000s. “People love it because it’s deep-fried and a bit dirty – it’s filthy, actually,” Matt says. “It was a Turkish barber in the Netherlands who invented this new late night snack, with layers of spicy shawarma chicken meat, deep-fried potatoes, chilli sauce, garlic sauce, a bit of salad, and melted cheese. I like the story and it tastes really good.”

His second, equally voluptuous, demo dish was a Gruyère fondue with butternut squash cooked in bacon fat with crispy bacon and garlic, accompanied by truffled potato ravioli for dipping. Matt was more than happy to sing the praises of British cheese. 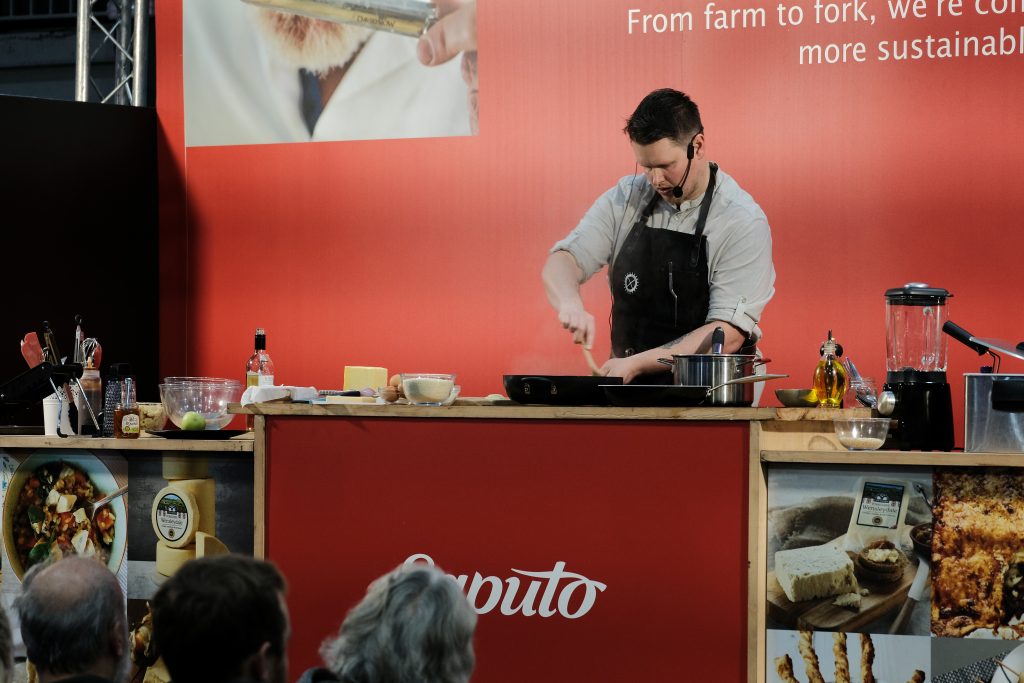 “Cheese is one of those things we do really well in this country. I’ve been to the United States a number of times and, apart from a few artisans here and there, they don’t have that love that we have for cheese. British cheese is up there with the best in the world, because we have that great tradition of cheesemakers.”

Although he struggled to pinpoint a favourite cheese recipe, Matt reckons “the nicest breakfast you’ll ever eat” is a fresh Italian ricotta, first thing in the morning, with an espresso and a spoon of honey. So, what would you find on his perfect festive cheese board?

“Definitely a good Stilton or a Roquefort. An aged hard cheese like a cheddar. A mountain cheese like Beaufort – one of the reasons I go skiing is to eat good mountain cheese. I would have to have a soft goat’s cheese, and I might have truffled-something for a bit of decadence. It would be quite a big cheeseboard, really. That’s the nice thing about Christmas – you can’t over-cater. You bring the same board out Christmas Day, Boxing Day and keep going until it all becomes grated cheese toasties.”

In the main exhibition hall, smaller regional producers sat alongside the giants of the dairy industry. Ornua Foods, the largest supplier of British and Irish cheese in the UK market, were serving up free cheddar toasties and margherita pizza from their stand. Sharon Hurdsman, who was there to represent the Leek-based manufacturer of brands including Pilgrim’s Choice and Kerrygold butter, said it had been great to engage with customers again.

“The response to our cheese has been really positive and it’s lovely to see that people want to be out and about. They love the venue and there’s a really good mix of producers – you could definitely start your Christmas shopping!”

Whitchurch-based wholesalers Westry Roberts & Co supply farm shops, delis, butchers and corner shops across Shropshire, Cheshire, parts of Wales and Staffordshire. Manager Becky Williams was delighted to be showcasing some of the many producers they represent at the show.

“We’re spotlighting the Hartington Creamery range with their blended fruit and savoury cheeses, and their blue cheeses as well. Obviously Stilton has protected designation of origin (PDO) status – it can be made in Nottinghamshire, Leicestershire or Derbyshire – and this is the only one still made in Derbyshire, at the Creamery in Pikehall. We had a very nice shoutout from James Martin for our own farm butter, which he used on stage, so that has been very popular!” 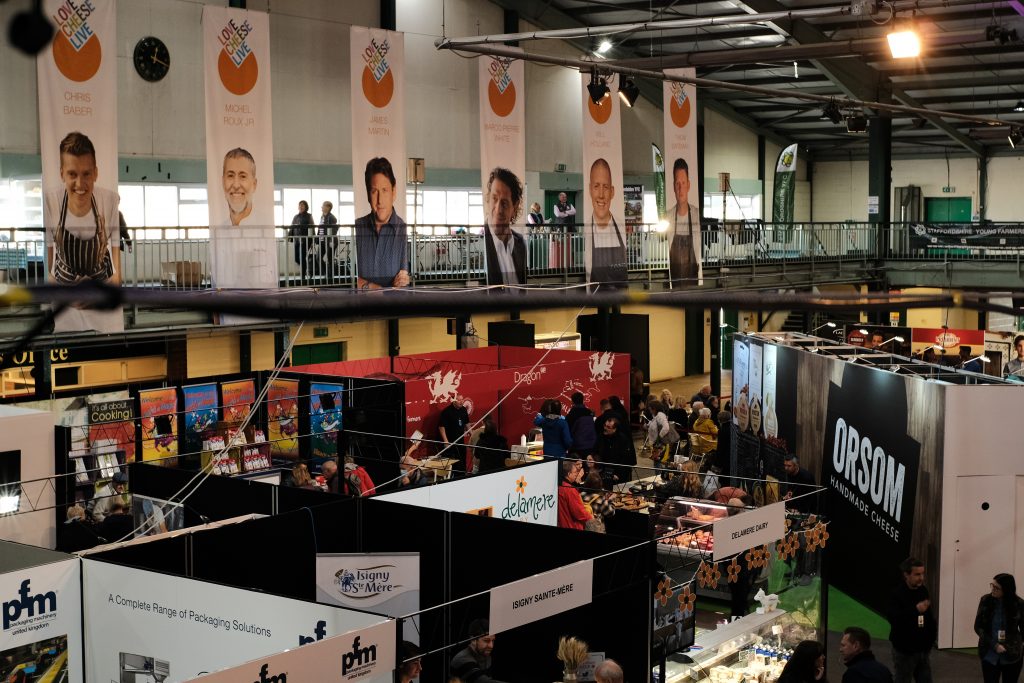 “It’s a bit overwhelming because the show has so many big producers, but we’re reminding people that there are lots of small producers out there making great cheeses. We are a team of three, and our three main cheeses all have PDOs.

“My personal favourite is the Staffordshire. It’s a traditional hard-pressed cheese. We make it, press it overnight and then it’s left to mature for three months, turned once a week. It’s creamy with a bit of a citrus note – so a little sharpness – but it’s a very nice cheese, great for cooking, and we’re the only people that make it.”

Indeed visitors on Friday might have seen Thom Bateman, chef-patron of The Flintlock at Cheddleton, use Staffordshire cheese in one of his demos.

Also there was Lymestone Brewery from Stone, who won a silver for Foundation Stone and a bronze for their milk stout in the Cheese Board Awards. After the great success of their cheese and beer pairing box in the run up to Christmas 2020, Lymestone are now taking orders for this year via their website. You can select your delivery date when you order and get free delivery in ST postcodes.

“We introduced online ordering because of the pandemic, and we have a history of working with other local suppliers,” explains brewer’s wife Viv Bradford. “Before Christmas last year we made contact with Mary at Staffordshire Cheese and asked if she fancied some joint working. She sent over some samples and we sat together for a cheese and beer sampling afternoon. We matched the cheeses with the beers and the Cheese Box was born. In there you get six lovely cheeses, six different Lymestone beers, and a little board as a gift set.”

On the upstairs mezzanine, alongside the M&S Cookery School, charity pumpkin decorating with Checkley Hall Farm and a children’s cookery school where little ones could make their own pizza, were Dalton’s Dairy from the Staffordshire-Derbyshire border. Fresh from winning Family Farming Business of the Year at the British Farming Awards in Birmingham on Thursday, they were offering visitors the opportunity to pat their own butter as well as serving their fruit spinners from a specially imported machine. The first and only one of its kind in the UK, it combines real frozen fruit with Dalton’s vanilla to create a delicious, swirled ice cream.

“It has a taste similar to frozen yoghurt, and the real fruit tastes very natural,” Rosie Dalton explains. “People have been enjoying shaping their own butter to take away. We pat every single block of butter individually in the traditional way. We milk the cows and separate the milk from the cream, which takes a day, and then the next day we can make the butter.

With two main stages and multiple smaller stages including the M&S Chef’s Kitchen, plus tastings including Belton Farm’s cheese and beer pairing talks, there was plenty going on to keep visitors entertained. 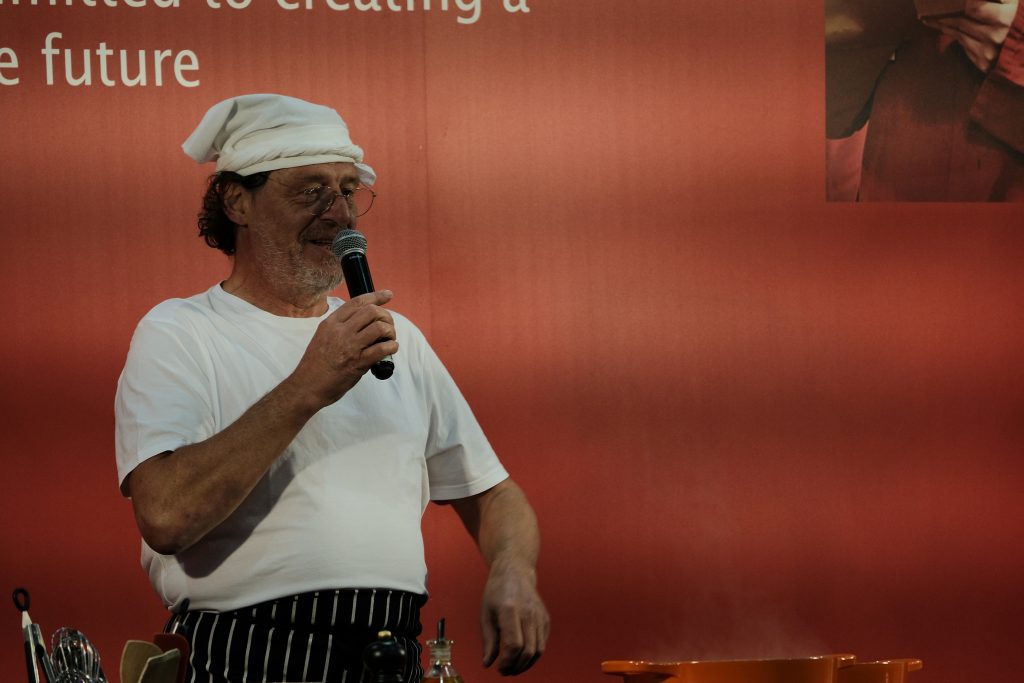 On Friday afternoon, Marco Pierre White demonstrated the simple three step process of creating a fantastic risotto for a crowd of self-confessed risotto lovers who doubted their own ability to make a good version at home.

“Risotto is a great dinner party dish because you can cook it with all your guests around you. Someone asked if I add wine. Some chefs do and some chefs don’t. I taste the wine and if it’s delicious, it stays in the glass. If it’s quite aggressive I put it in the pan and reduce it down, to reduce the acidity.”

Marco confesses that he prefers to eat cheese rather than cook with it, and found Long Clawson, from Leicestershire, a highlight of the show. “Their Blue Stilton was so deliciously creamy, the Red Leicester beautifully aged, and the white Stilton was so delightfully crumbly, which of course is what you want from a Stilton,” he says. “But I’m a lover of cheese so I’m easily seduced.”

Does he think the pandemic has changed our attitudes to food and cooking?

“People have been at home and working from home, so they’ve had to cook. The standard of cooking in Britain must have gone up enormously, because the more time you spend at the stove the more confidence you grow – and that’s the whole thing about cooking. Before the pandemic, lots of people never even thought about cooking, but now it’s their new hobby. They always say there’s a silver lining to every cloud and there is.”