Ahead of her Lichfield Literature Festival appearance this month, Dr Amy Jeffs tells Katy Edgington about her first book, Storyland: A New Mythology of Britain

After a turbulent 2020 and 2021, Lichfield Literature Festival returns to its usual place in the calendar this year and will take place between Thursday, March 24 and Sunday, March 27 at venues around the city.

“In my new role as Literature Programmer, I really wanted this year’s programme to offer something for everyone,” says Anna Millward in her introduction to the Festival guide, and she’s certainly managed to tick a huge number of boxes, pulling together a packed programme of in-person literary events over the long weekend. They run the gamut from historical non-fiction to crime stories and novels to a draw-along for the kids with award-winning author and illustrator Rob Biddulph.

One of the many titles that will come under the Literature Festival’s spotlight is Storyland: A New Mythology of Britain (riverrun), which was published last September. To mark the occasion, J’AIME caught up with author Dr Amy Jeffs, an art historian specialising in the Middle Ages as well as an artist.

In 2019, Amy earned her PhD in Art History from Corpus Christi College, Cambridge, after studying for earlier degrees at the Courtauld Institute of Art and the University of Cambridge. During her PhD she co-convened a project researching medieval badges and pilgrim souvenirs at the British Museum. She then worked in the British Library’s department of Ancient, Medieval and Early Modern manuscripts and is currently a Fellow at the Paul Mellon Centre for Studies in British Art. It was her undergraduate degree that forged Amy’s passion for art history and specific interest in the Middle Ages.

“When I was 18, the University of Cambridge gave me a place to read Anglo-Saxon, Norse and Celtic. It offers a mixture of language, literature, art history and more obscure subjects like codicology (the study of manuscripts, especially how they are made) and palaeography (script history). I just loved it and from BA to PhD I have rarely ventured beyond the 16th century,” said Amy.

Despite being described first and foremost as an art historian, as an artist, a regular contributor to Country Life magazine, and now an author, Amy’s work defies attempts at pigeon-holing. Her writing is often accompanied by her own linocut and wood-engraved prints. Amy started producing linocuts of Britain’s medieval origin myths when she was living in Somerset and writing up her thesis.

“These turned into 24 illustrations for a series of Country Life articles about medieval legends set in Britain, which in turn became a proposal that helped me find Georgina Capel, my agent, and then Quercus, my publisher. I had thought for a long time that the stories could make a beautiful book.”

Storyland was the result and is her first book. Steeped in magic and vividly reimagined for modern readers, it is a beautifully written and illustrated mythology that revives some of the oldest legends set in some of the wildest landscapes of medieval Britain.

From ancient origin stories through sections entitled ‘Prehistory’ and ‘Antiquity’ and right up to the Middle Ages and the Norman Conquest, Storyland treads in the footsteps of Brutus and Scota, Lear and Cordelia, Arthur and Merlin, Edward the Martyr and the giant Gogmagog – each illuminated by Amy’s dramatic linocuts. Of course, it was this series of artworks that came first, but there were several aspects to the creative process that worked together towards the end product.

“For me, making the art and writing the text, as well as travel and composing songs, helped me home in on the aspects of each story that captivated me most,” explains Amy.

Each story is positioned with a historical commentary, where Amy makes clear where she’s used dramatic and artistic licence and what her primary source material was. But why did she choose this route when she could have simply stuck to the retelling of each legend?

“My first answer is that when I read retellings of myth, I’m often eager to know more about the author’s process,” she answers. “I wanted to offer a commentary that was clearly separate from the stories, as well as a primary source reading list at the end, so that readers could stay in the fiction if they wanted to or journey deeper into the medieval material.

“My second answer is that these wonderful stories are common property but little known. If readers want to write their own retellings, then a way into the original material could be helpful. I wanted to write a useful book, as well as an engaging one.”

For the layperson, many of the myths and legends may not be familiar, although certain names, places and landmarks will ring a bell. For Amy, it’s tricky to say what exactly she hopes readers will find in these stories and what they should take away.

“I know readers will bring all sorts of brilliant perspectives to the stories that I could never dream up,” she says. “But I’d love readers to recognise the places described in the book that are local to them, whether it’s the red earth of the Clent Hills or the toadflax that grows on the north Cornish coast.

“Likewise, writing this book deepened both my love of places that I might not otherwise have paid attention to. I hope Storyland helps foster a sense of wonder at the antiquity and mystery of our collective relationship with these islands.” 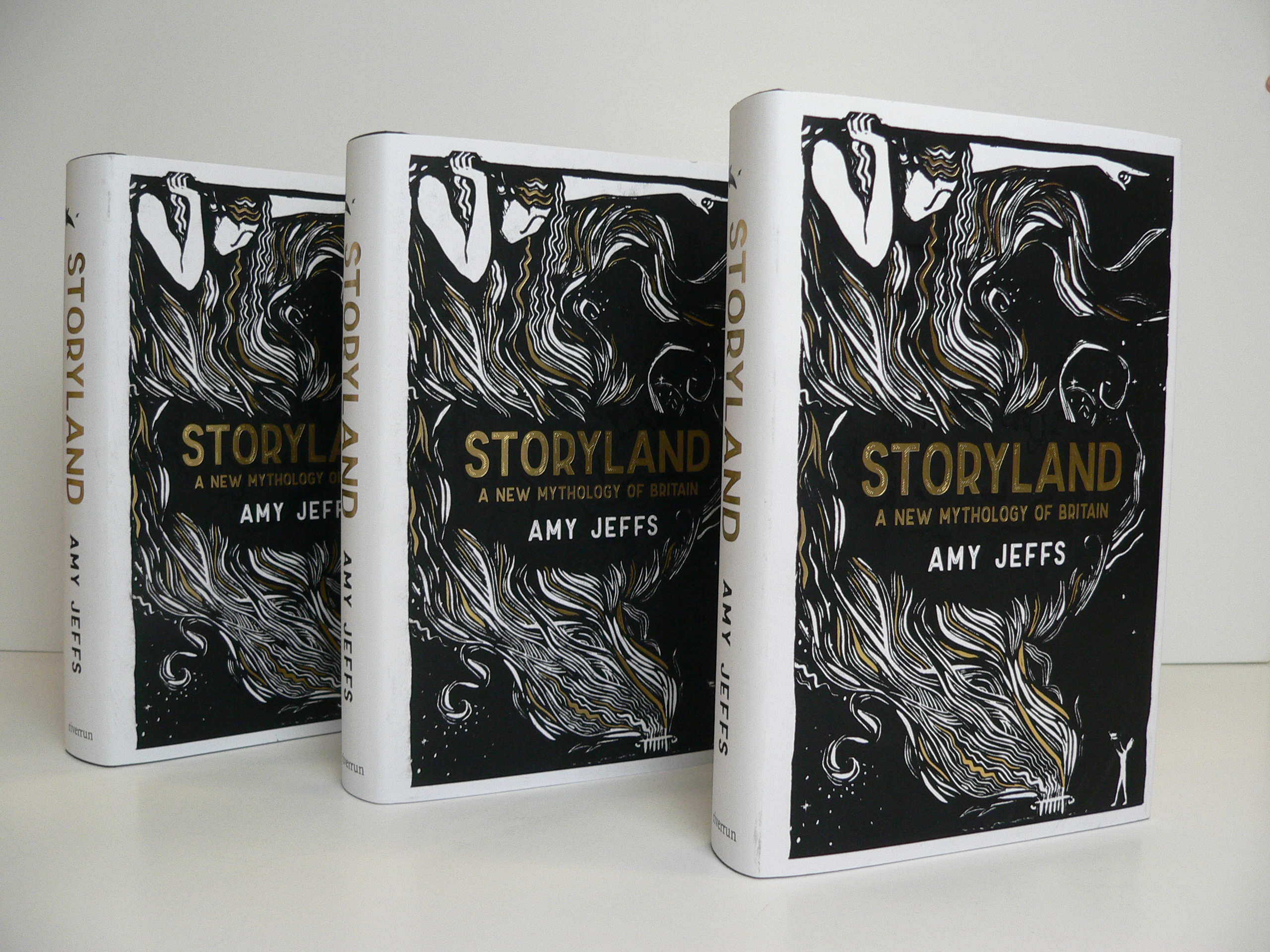 Myths for the modern world

Although these ancient stories deal with emotive human themes like extinction, parenthood, defiance, love, loss and the yearning to belong, many of them draw links between Britain and the rest of the world that go back thousands of years. This is no coincidence, as Amy explains.

“These myths were not seen as myths in the Middle Ages. They were deep histories that often served political functions, including connecting their patrons with the illustrious societies of the Old Testament and Classical worlds. It’s important to acknowledge that we still emphasise historical narratives of which we are proud: that emphasis is always political.

“We all belong in the world, but that reality is too often blurred by myths of domination and exclusion. Perhaps old stories can help us spot modern myth-making and think about it more critically.”

Her personal favourite among the myths included in the book is also the subject of her favourite linocut, and it happens to be the same one that was used for the cover.

“It shows the goddess Diana appearing to the exiled Trojan, Brutus, who will come to found and give his name to Britain. By telling him where to go and what to do, she gives the exiled Brutus a sense of vocation. I love that idea: of being adrift and then suddenly full of purpose. Diana has become the personification of vocation in my mind.

The critical response has been positive; Storyland has become a Sunday Times bestseller, the Times’ Historical Fiction Book of the Year, and was shortlisted for Waterstones Book of the Year. So, how is Amy feeling about the way it has been received and the public reaction to it so far?

“Bringing the tales in Storyland to a wider readership was like introducing a new friend or partner to my family; I hoped they’d get on, but it was out of my hands,” she says. “The reaction to Storyland has been disarmingly positive and as readers have started forming their own relationships with and creative responses to its stories I’ve felt huge relief and pleasure.”

The future is certainly looking full of promise for the multi-talented Dr Jeffs. At the moment, Amy is working on two new book projects inspired by the Middle Ages, which she says she “can’t stop thinking about”. The first is just about to be announced as we go to press, while the other is still waiting in the wings for now. I wondered, is she looking forward to engaging with the public during her appearance at Lichfield Literature Festival?

“After the seclusion of the past couple of years, it’s a privilege to meet people face to face,” Amy replies. “I’ve learned so much from people’s questions and ideas about Storyland and when I go back to my desk and start writing again, those affirming interactions put wind in my sails.”

To follow and find out more about Amy’s work, find her on Twitter @amy_historia, Instagram @historia_prints and at amyjeffshistoria.com. Prints of her artwork are available for purchase via art-of-illustration.co.uk.

You can catch Amy at Lichfield Literature Festival on Saturday, March 26 at 3.30pm at The Hub at St Mary’s on Market Street. Tickets are priced at £10. To book, visit lichfieldliteraturefestival.org