Melissa Bettson, who runs Tuppenhurst Barn B&B and Cafe in just outside Lichfield, chats to Katy Edgington about adapting to the pandemic and to motherhood

March is the month we celebrate not only Mother’s Day but also International Women’s Day, so when better to catch up with an inspirational female local business owner and mum, Melissa Bettson?

When she finished her degree, Mel was set on coming home but not to farm at Tuppenhurst as several generations of her family had before her. Searching for a way to make her own contribution to the farm, she was out with her German Shepherd, Bear, who she sadly lost last year, when she had the idea to transform a listed 17th century outbuilding into a dog-friendly café and boutique bed and breakfast. After a painstaking restoration and renovation process, Tuppenhurst Barn B&B and Café opened in June 2019, with four spacious ensuite bedrooms including an accessible ground floor room.

The farm is also home to an equine arena, available for hire and membership, where Bea of Houndspeak Dog Training also runs her puppy classes and evening classes. As well as running both businesses and baking all the cakes for the café, Mel lets out the family’s 500 acres of land for sheep and arable farming.

Located just outside Handsacre and a stone’s throw from the Trent and Mersey Canal, the café offers a menu of light breakfasts, light lunches and homemade cakes which go down a treat with the many walkers and cyclists who visit each week. The impact of Covid-19 has inevitably been felt across the business. The breakfast menu now focuses on the most popular items, like bacon and sausage sandwiches, croissants and pancakes, and previously long opening hours have been reduced.

“We’re now open Thursday to Sunday, 10am until 3pm, which has worked really well throughout winter,” Mel explains. “Maybe in summer we’ll expand those hours, but it gives the staff a break, especially because the B&B was almost fully booked from the time we were able to reopen until Christmas. It’s been very full-on, but it’s been great.”

The café also serves afternoon teas and is available for private hire. With capacity at a comfortable 25 indoors, it’s proving a popular venue for baby showers and other small parties. Another effect of the pandemic has been to expand the offering into private catering as people look to host in their own homes. Mel’s partner Jordan was furloughed at the outset, so they worked together in the café for a while when Mel was unable to have staff in.

“There are definitely more people who will sit outside now at any time of year and whatever the weather,” she’s noticed. “If we are full inside, quite often people will choose to sit outside even in the rain and the cold!”

This Mother’s Day, the team will be offering afternoon tea to eat in or take away. The demand for takeaway options has continued despite the lifting of restrictions, and the business has adapted accordingly.

“A lot of people want an afternoon tea to have at home, or they might have older parents that don’t want to come out,” Mel notes. “It’s something a bit different to coffee and cake – a bit of a celebration.”

Balancing business with being a mum

Mel will be celebrating this Mother’s Day with her own daughter, Maisie, who arrived in September 2020. Since then, she has mostly been fitting in farm-related office-based work in the evenings and spending as much quality time as possible with Maisie. I wondered how becoming a mum has affected Mel’s outlook on her businesses and life in general?

“I think Jordan would say that when we met I was very career-focused and wanted to compete with my horse and do this and do that, and kids weren’t really in the mix,” she says. “When we started talking about having a baby and our future together she very quickly came along. I didn’t realise how much having her would change everyday life, but now every day is about her and fitting everything around her. Having her around is brilliant. She comes with me everywhere. She walks into the cafe and she knows where everything is. ”

With baby number two – a boy – due at the end of April, Mel is keen for the family business to support them to be able to go and do what they want to do – whether they want to be involved, to take it in their own direction, or whether it’s just there in the background. 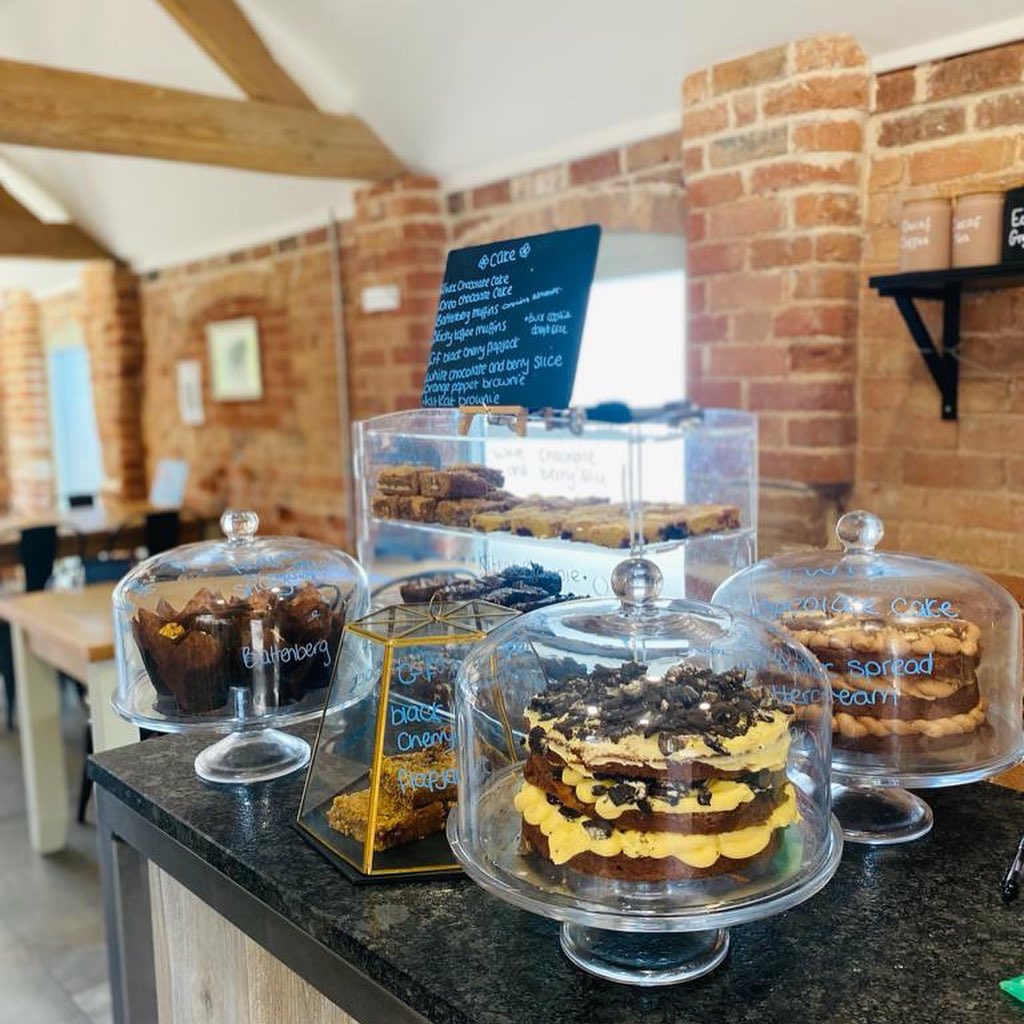 Cakes on display in the Café at Tuppenhurst Barn

One of the great lessons Mel shares from becoming a business owner and becoming a mum is the importance of a strong support network. Zoe Niven, owner of Daisy’s Kitchen in Rugeley, baked for the café when it first opened, before Mel took on the baking herself. When she fell pregnant, Mel asked if Zoe would consider taking it on again so that she could step back a bit when the time came.

“It’s been great to have that support,” Mel says. “Because there’s a lot of work involved that I won’t stop doing – all the bookings, admin and office work for all three businesses – and I won’t have maternity leave so to speak. The baking front is where I can actually get help from somebody else. Zoe’s bakes are great, so I spoke to her after Christmas when I was ready to take a step back, and she’s now doing our baking for the next few months.”

Passion will push you, but you need support

For other young women or mums who have or want to start their own business, Mel believes you should do something that makes you happy and have the courage to do it even if it’s years in the making. It may not always go the way you planned, but it might develop into something else.

“I think you need to do something you’re passionate about and something that has a strong feeling behind it that will push you forward,” she stresses. “When I was thinking about the cafe and B&B, I wanted to build a place where I would walk to with the dog and where I would take my family.

“You have to have something pushing you. For me it was wanting to build a dog-friendly place and wanting to do something here was very important to me, especially after my dad passed away. I had a sense of responsibility and, I suppose, a sense of duty. But it had to be something I wanted to do, where I would wake up every day and think ‘I love doing this’. I love running my own business. It’s hard work but I love it.”

Mel counts herself lucky to have a great team of people on hand to help in different ways. She works closely with her café manager, as well as having a very supportive and understanding partner in Jordan.

“He has his own full-time job, but he’ll be the one out there at 6am harrowing the arena or unloading the wholesale orders,” she says. “I think it’s very important to remember that you can’t do it all by yourself. I thought I could at the start – but you can’t, and you definitely can’t when you have children because your children come first. I got quite disheartened when I couldn’t do it all. I thought I was doing something wrong. You’re not doing anything wrong; you do need that support and you shouldn’t be afraid to ask for help.

“Before I would kick myself and not want to ask for help – I would see it as a weakness. But now I realise it’s not. We’re all human. You need to be passionate and be your own driving force, but you also need someone behind you putting a bit of fuel in every now and again.”