He may be seen as a wild man of the woods these days, but one of the UK’s leading foraging instructors used to be a London office worker. Jenny Amphlett met him

Marlow Renton used to live in London and run a web development company. Then when the country spiralled into recession after the banking crisis he decided to give it all up to become a foraging instructor.
Now the 43-year-old runs foraging courses across the country through Wild Food UK, a business he founded, and has written a bestselling book about foraging.
“It started nine years ago and was a hobby to begin with really, then grew quite naturally into something bigger than that. When the recession hit I started doing more foraging to get away from London and the office.”
It was initially a personal interest, but then Marlow’s friends started asking him to take them out foraging and he realised it could be a business opportunity too. 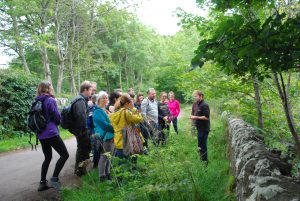 The turning point was when someone paid for him to stay in Cardiff purely to lead a group of people on a foraging expedition.
He says: “I was becoming bored of my old life and realised I could make a new job from teaching people to forage. It’s a wonderful skill to teach people, a skill for life that connects people with nature.”
It definitely helped that Marlow’s web developer past meant he knew a lot more about the internet than your average forager. Run an internet search for foraging in the UK and it’s Marlow’s business that jumps out first.
He now has a team of five foraging instructors, including one in the Birmingham area, and a YouTube channel with 16,000 followers. He’s also written his own book, The Wild Food UK Foraging Pocket Guide. “We teach around 2,500 people per year about foraging and nature, and it’s growing,” he says. 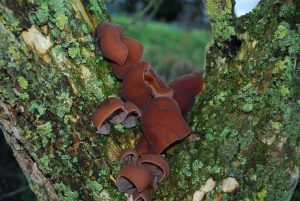 “My original plan was that I’d travel around Britain during spring, summer and autumn then take the winters off to have some fun. But I’m married now and have a child so it’s more a case of having instructors in different areas.”
Marlow feels he is helping to reintroduce skills that people would have had in days gone by.
“The average person can identify a blackberry, a raspberry and an apple while they’re out walking but there’s just so much more to find out about. It makes walks so much more interesting if you know what you’re looking at.”
He stresses that he and his fellow instructors are very ecologically minded, and says that when he takes a group out they pick things purely to make a meal at the end of the session. He teaches strict guidelines and sticks to them himself. 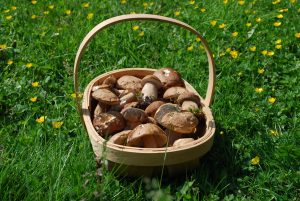 “It isn’t a case of coming home with enough to stock up the fridge. That said, one of our venues has so much wild garlic they consider it a weed and almost ask us to take it away.”
Marlow asks his pupils to use their new found skills wisely and to perhaps put their knowledge to use in their own garden.
“At the beginning of lockdown I did a series of four back to basics videos showing people what they could find during their daily exercise. I had lots of people saying it had helped them to start a new life.”
When it comes to mushrooms he says there is more to choose from in autumn, but also more varieties to make mistakes with.
For Marlow the first rule of foraging is to not pick anything unless you know exactly what it is.
“You can find out from photos, books, the internet and from asking knowledgeable people like ourselves. We get emails every day from people asking us to help them identify things they’ve found and asking whether they’re edible and common. 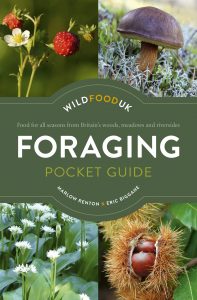 “It’s important that people know not to just pick things willy nilly because some things are rare.
“I always advise people to go on a course to learn how to forage respectfully. We also always teach people to follow the Countryside Act. As long as they follow that and don’t pick things unless they know what they are then they’ll stay safe.”
* To find out more about Wild Food UK and Marlow’s book visit www.wildfooduk.com

featured food & drink lifestyle outdoors people things to do vegan
Share. Twitter Facebook Pinterest LinkedIn Tumblr Email
Previous ArticleMake meals, not waste – how to cook something delicious from your kitchen scraps
Next Article Can I reduce my risk of diabetes?