What is it like to be part of Lichfield Gospel Choir? Katy Edgington finds out from musical director Themba Mvula and three enthusiastic choir members

At more than 100 members strong and with a repertoire which embraces African, gospel and soulful music, Lichfield Gospel Choir has an infectious joy and a sense of community at its heart. That’s at least partly down to the choir’s ethos of creating a space where each member can participate equally, regardless of ability.

The choir began as a series of workshops led by Birmingham-based acapella quintet, Black Voices, for the Lichfield Festival in 2009, when a festival chorus was created. The project was such a success that a core group from that original chorus decided to set up their own permanent gospel choir.

Not all members have been a part of the choir for so long, though. Andy Patterson and his wife joined six years ago, when they were looking for a challenge in their retirement.

“Initially we had a ‘taster’ session with a local, commercially franchised choir,” Andy explains. “This proved quite daunting with both a large number of singers involved and the pace of learning. Some friends suggested we sign up for Lichfield Gospel Choir, since we wouldn’t need to audition; it seemed more locally focussed and community-based – and we didn’t need to know how to read music, which was a huge bonus!”

Others with more musical experience, like Bob Harrison who had been a member of Lichfield Operatic Society for almost 30 years, joined when other choirs turned out not to be quite what they were looking for.

“A friend recommended Lichfield Gospel Choir, and, as soon as I joined, everything seemed just right,” Bob says. “I had a warm welcome, felt part of the choir from the start and loved the music. I must admit I struggled with the words initially but after a few weeks everything fell into place, and I have never looked back.”

The choir has been led from the start by music director Themba Mvula, who was joined by Gabriella Liandu as assistant music director in 2020. Born and raised in Zambia, Themba started singing and playing keyboard at an early age. Aged 11, he moved to the UK and took every musical opportunity available to him, singing with the National Youth Choir of Wales and studying at Birmingham Conservatoire. 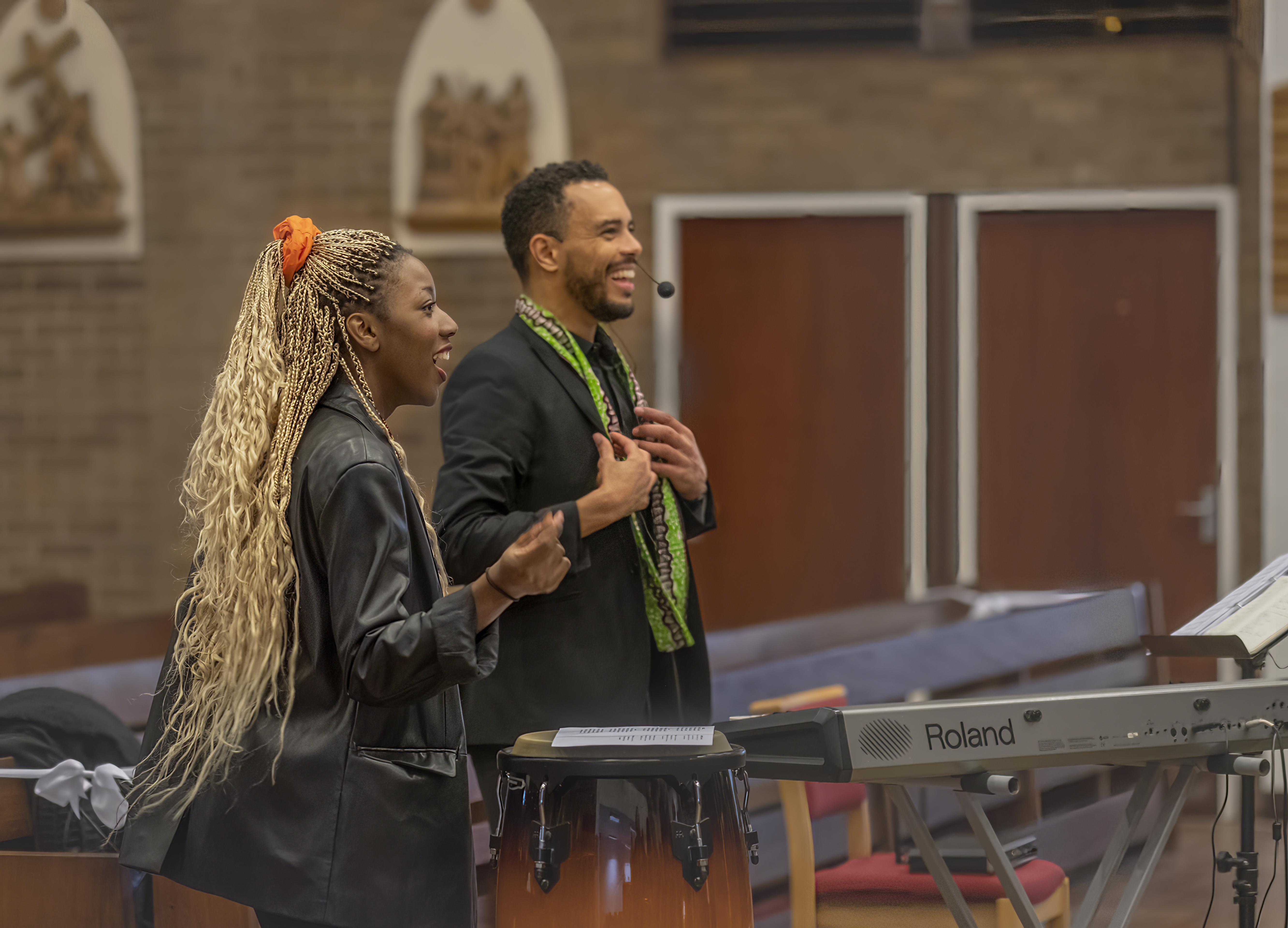 Passionate about helping people find confidence with singing, Themba specialises in teaching music by ear. The choir learns all of their music this way, a completely different skill to reading it off a page and one which Themba believes allows for a much more engaged experience.

“I find if people have the notes and words in front of them it can become an almost intellectual exercise,” he says. “If you don’t have that then you’re forced to rely on your senses… listening not just to the musical notes, but also to the way something is sung, to the expressions of someone’s face, to the moment in their body.

“Teaching this way allows me to get so much more life and energy out of the choir and the resulting sound can be really exhilarating! It also means they’ll have these melodies and harmonies embedded in them for years to come. I reckon the average choir member has over 30 songs in various languages and styles memorised, which I think is pretty impressive.”

The group is constantly evolving and taking on new challenges, singing everything from Nigerian lullabies to Primal Scream. So what does Themba look for when choosing what they’ll sing?

“The most important thing is that it has to be fun to sing for each voice part, including the basses! And this means I’ll often end up doing my own arrangements to make things work for them. I’m not interested in doing impressive stuff: the joy is in the richness of the harmonies, the energy of the rhythms, and the movements! So much music from the South African choral tradition is perfect for this, and that’s why it’s such a key part of our repertoire.”

For Andy, the singing itself is undoubtedly the aspect of the choir he enjoys most.

“No musical scores, no prior musical knowledge, learning everything by rote – and the totally absorbing enchantment of African (and many other) gospel melodies and rhythms, as well as initially impenetrable lyrics! It’s a transformational experience which is hugely rewarding on all sorts of levels.”

Fellow choir member Kate Slater joined in 2014 after attending a gospel singing workshop with Themba. She says rehearsals on Tuesdays soon became the highlight of her week.

“It’s kind of impossible to describe the utter joy of singing in our choir. I’ve made wonderful friends and we’re very lucky to have such a brilliant, talented music director in Themba, he has so much faith in us, is just endlessly encouraging and brings this enormous amount of energy to everything he does.”

“This is a very friendly choir who have learned to sing with no inhibitions,” adds Bob. “The music we sing is very uplifting and I always used to say that I walk to rehearsals and float back home on a wave of euphoria! I love learning by rote and some of the African harmonies that Themba puts together are simply sumptuous.”

Staying strong through the pandemic

Like all community groups, the choir were forced to adapt or die in March 2020 when Covid-19 hit. They were straight out the gate in the very early days, instigating online rehearsals that carried on throughout 2020.

“It seemed like it would be a real challenge at first, but thanks to the enthusiasm and determination of our incredible committee we very quickly found a model that started with me live streaming from my bedroom(!), imagining the choir were there in front of me and just leading as I normally would,” says Themba. “Then we invested in some equipment and software, and we started using Zoom and YouTube simultaneously – not everyone was a fan of Zoom!

“I pre-recorded all the vocal parts so it would feel like people were singing as part of a group and in harmony. That seemed to work really well. Very quickly it felt like we had adjusted, and it became a model in its own right, and it actually had some positives in that I was getting to know the individuals in the choir and what they sounded like so much better – I would encourage solos and other interaction as a way of making less of a one-way exchange.”

It was hugely important to Themba as well as the choir members that they kept going and kept in touch online during the pandemic.

“At one point, it was the only thing in my week I knew would actually happen; being a freelancer almost all of my other work disappeared. The choir rehearsals gave me something to prepare for and something to look forward to. And more than that it was just great to connect with people, singing and laughing together. I think lots of our members really valued that too.”

In recognition of his inspirational and dedicated leadership, which ensured the choir continued to thrive despite the setbacks and hurdles of multiple lockdowns, Themba was shortlisted for both a Making Music award and, together with the choir, a Royal Philharmonic Society Inspiration award in 2021.

Back to performing for an audience

Whenever there was a safe opportunity to do so, the choir found ways to sing together in person, including adopting a temporary rehearsal home in a local barn. They also took part in several virtual performances, but everyone is looking forward to performing in front of an audience again. Luckily, there are already lots of events in the diary for 2022.

Dates include a concert with the City of Lichfield Concert Band at Lichfield Cathedral on Saturday, May 14, and a performance at Lichfield FUSE Festival on Saturday, July 9. On Sunday, July 10, Lichfield Gospel Choir will join a rousing large-scale concert at Birmingham Symphony Hall to mark the 10-year anniversary of Community Spirit.

“We are all performers, and this is what we live for,” says Bob. “It’s great singing together in rehearsals but the buzz of live performances is on another level. Particularly as we have an extensive portfolio of songs and Themba never lets on to us what we are going to sing at any concert. He plays the first few bars of a song and nods to us as if to say, ‘you know this one’ and, somehow, we do, and we have never let him down – yet! No words, no music, no clue what is coming next: I can’t wait!”

“It feels like we’ve grown so much as a choir over the last couple of years,” agrees Kate. “We’ve become even closer as a group (all that staring into each other’s living rooms over 18 months on Zoom!) which I think has made us braver and stronger together – it’s going to be so exciting to see what lies ahead.”

If you’re interested in learning more about Lichfield Gospel Choir or even getting involved, the best way is to go and see them perform! There is currently a waiting list for sopranos and altos, and a healthy number of tenors and basses, but they are accepting new members so do get in touch.