September 2021 saw the launch of a new independent press in Staffordshire, founded with the aim of publishing beautiful books of exceptional poetry. Fawn Press was born from founder Scarlett Ward-Bennett’s passionate love of books and literature, her belief that poetry has the power to change lives through the connection between writer and reader, and her goal of publishing new and under-represented poets.

Scarlett is a poet first and foremost, with her first collection ‘Ache’ released with Verve Poetry Press in 2019. However, as someone who has always been fascinated with the publishing industry, she wanted to look beyond bringing poetry into the world by writing her own books. Her ultimate goal in setting up the press, she tells me, was to be a portal through which poets would materialise their poetry, and to facilitate a platform for their voices.

“I love poetry, and I wanted to be in a position where I could help bring that into the world, almost like a poetry midwife. The big UK publishing houses have historically had issues with diversity: the report Rethinking Diversity in Publishing is just one resource that supports this. I wanted to have this in the forefront of my mind when going forward.”

Some of Scarlett’s favourite poets are Fiona Benson, Isabelle Galleymore, Ella Duffy, Seán Hewitt, Paige Lewis and Kei Miller. The work of other contemporary publishers is also encouraging her as she builds Fawn Press’ catalogue and reputation.

“They all seem to explore issues of society and human emotion through the lens of nature, which I adore. In terms of publishers, I adore Nine Arches Press. If it has their stamp on it, you don’t need to be familiar with the poet. That’s the beauty of building a really strong brand, and is a place I’m aiming to get to. I also think Penned In The Margins are printing really exciting stuff right now!”

The Midlands is home to a rich and vibrant publishing community, with Scarlett citing The Emma Press, Verve, Offa’s Press, Nine Arches Press and Ignite Books as just a few of the presses that have inspired her. She’s also keen to note that they’ve shown her that there will always be room for more indie publishers: they are peers, rather than competitors.

“I think it’s a mistake to wait for a ‘gap’ to qualify establishing a press, because there are so many doing great things already, but to add to that tapestry just makes it more varied,” she says. “Actually, as ‘gatekeepers’ of what gets published, it’s great for the health of the poetry scene in general to have as many different publishers from different backgrounds as possible!”

As well as being a poet in her own right and running Fawn Press, Scarlett facilitates workshops, both online and on visits to schools, colleges and universities. As a queer, disabled writer, she explores a sense of identity in her poetry through the lens of her lived experience as a woman in a society that often sees that as an inferiority. She has recently had poems published in Nine Arches’ Under The Radar magazine and fourteen poems anthology, and has work featured in Broken Sleep Books’ forthcoming Ecopoetry anthology. It hasn’t been all smooth seas and plain sailing for Scarlett and her new venture, however – far from it, in fact.

“Apart from the admin of submissions windows and the technicalities of learning to design for print, the biggest challenge so far that dwarfs anything else I’ve had to face was that in February, just months before our pamphlet releases, and in the middle of scheduled workshops and visits, I was hospitalised with multiple sclerosis,” she explains.

“I lost my ability to walk, talk, swallow, read and write. That challenge was not just physical, but it made me realise how important it is to have events over Zoom. I had to cancel numerous events when I got out of hospital, but thank god for events such as the Saboteur Awards who have maintained accessibility, so I’ve been able to feature on a publishing panel. As events transition back to in-person, we must remember to ensure accessibility.” 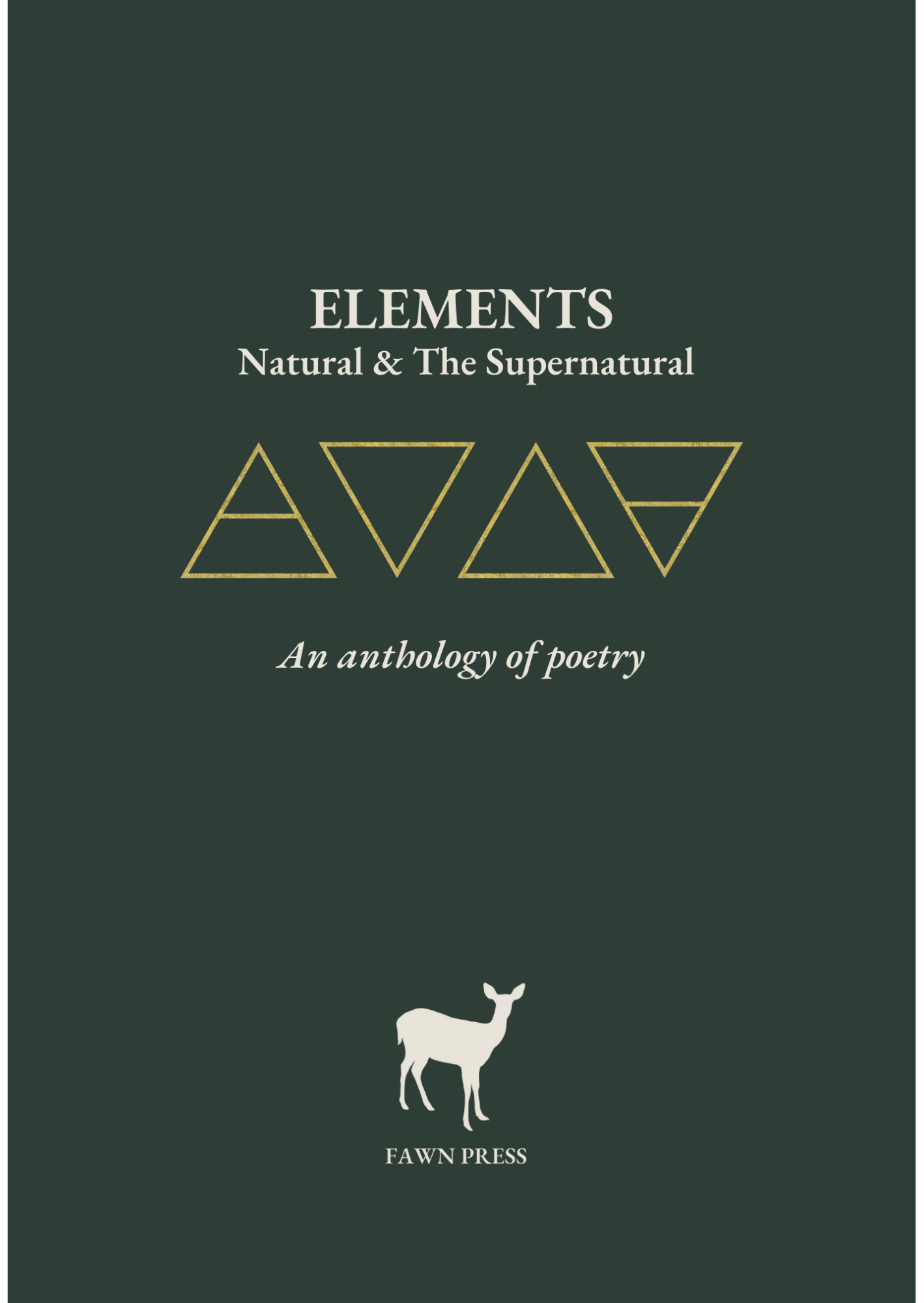 Elements was the first anthology published by Fawn Press

Despite the intricacies of setting up a new business and Scarlett’s health-related setbacks, Fawn Press launched their first anthology, Elements: The Natural & Supernatural, in January this year with an event at Hanley Waterstones. The anthology, featuring the work of notable local poets, is already in its second print run, but that’s not all Scarlett’s achieved so far.

“I could name-drop and say we were proud to print Birmingham Poet Laureate Casey Bailey and Coventry Poet Laureate Emilie Lauren Jones in our anthology who are powerhouses and incredible both of them, but I want to talk about the writers I found in our submissions window and though our mentorship scheme who are truly talented,” she says.

“Mikey May is a poet who creates his own zines of poetry that are stunning, and we were lucky enough to have had him on our mentorship scheme where we offered feedback and support, as well as doing an IG Live with him (@fawnpress).

“I was also incredibly excited to be editing Devjani Bodepudi’s manuscript with her this year, which I think is one to look out for. Sally and Nabeela, our pamphlet poets, have poured their hearts and souls into their work and I am incredibly proud!”

Poetry that takes you by the hand…

So, what are Fawn Press looking for in the poetry they choose to publish? Well, the brand ethos has at its heart ‘poetry that takes you by the hand and leads you into the woods’.

“I love poems that transport me into a different world, show me things I haven’t seen before, and force me into perspectives which leave me changed when I finish the poem,” Scarlett explains. “I don’t like poems that tell me ‘this is what happened and it made me feel this way’. I want poems to possess me, and show me rather than tell me.”

Another key tenet of the Press’ ethos is to be a platform that welcomes all writers, ‘rejecting elitist and pompous attitudes to publishing in favour of an inclusive approach, whilst maintaining a high quality of exceptional writing that excites and inspires’. Scarlett is clearly passionate about supporting under-represented poets.

“I think that we should all as human beings be trying to actively dismantle oppressive powers that marginalise anyone,” she says. “It’s not enough to be anti-racism, -homophobia and -ableism, you must reach into the communities.”

There’s no doubt this commitment is being put into action at Fawn Press. Scarlett offered a mentorship scheme to a select few poets who showed potential in the anthology submissions window, extending that invitation to the poetry community. There were no forms or any hoops to jump through: if you were from a marginalised background, all you had to do was email and they would select as many as possible.

The mentorship scheme included editing and feedback, 1:1 Zoom sessions, advice on submissions, guidance on writing a cover letter, and also an IG Live video using the Press’ social media as a platform to share the mentees’ poems. All mentees are also invited to live performances arranged by Fawn Press, and it’s free for them to submit to future submission windows.

As they are unfunded, the Press charges submission fees to cover the labour of reading, but for minority poets there are a number of free submission places, no questions asked. You can also find multiple resources linked from their Instagram profile.

“I’m really passionate about finding the next new voice in poetry,” Scarlett adds. “If I can offer a platform to emerging poets, I’m not just helping that single individual, I’m adding to the richness of the literature pool, and I think that’s very important.”

2022 looks to be an exciting year for Scarlett, Fawn Press, and the writers they’re working with so closely. Following on from readings from the Elements anthology at Lichfield Literature Festival at the end of March, the first wave of pamphlet poets will appear in April, with hopes for a launch event at Birmingham Waterstones.

“Then this summer we will have an open submission window to find our next pamphlet poets, and later in the year we’ll be adding a second book to our anthology series, so there will also be a submission window open for that too!” adds Scarlett. “I want the Fawn Press brand to be recognisable for its elegant covers, exceptional poetry, strong company ethos, and to be home to stories that truly take you by the hand and lead you into the woods.”