He impressed the judges and critics on MasterChef: The Professionals, and now Liam Rogers has wowed the discerning diners of Lichfield at a special evening with Sauce Supper Club, as Amy Norbury discovered

As a finalist on the toughest cookery competition on TV- MasterChef: The Professionals- Liam Rogers showed he was serious about food. Although he was just pipped to the post by Brummie chef Dan Lee, Liam- the youngest of the three finalists at just 24 at the time of filming-wowed judges Marcus Wareing, Monica Galetti and Gregg Wallace, as well as the critics and a whole host of top chefs and restaurateurs on his incredible journey. 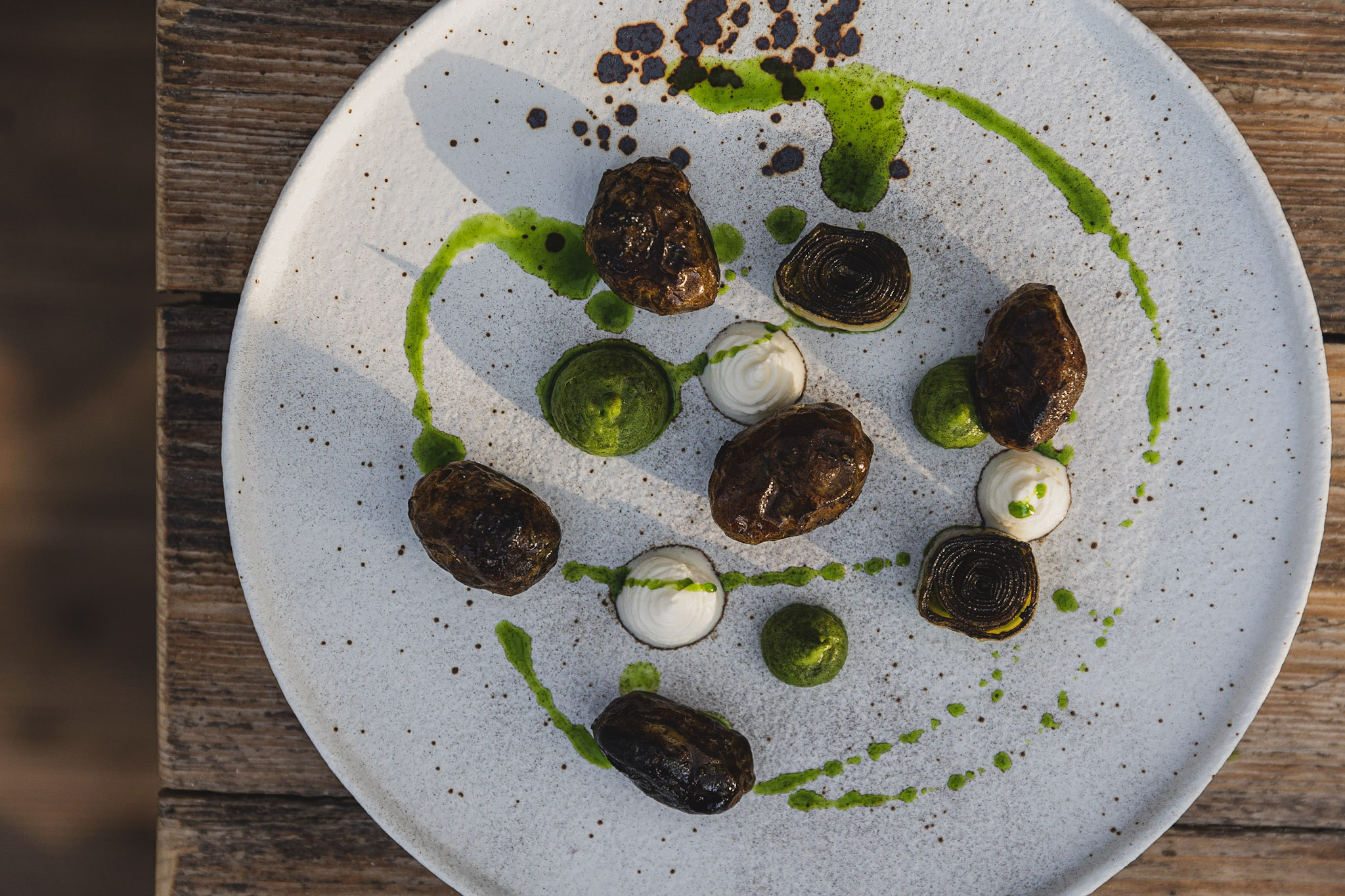 Liam’s ascent, though, should come as no surprise. After all, Michelin-starred restaurants are in his blood. The talented chef started out as a youngster in his father’s restaurant kitchen before moving to Scotland at the age of 18 to work at the country’s most prestigious eatery; the two-Michelin-starred Restaurant Andrew Farlie at Gleneagles.

After four years north of the border, Liam moved to Nottingham as senior chef de partie at Restaurant Sat Bains-that’s another two Michelin stars right there-which is where he was working when he decided to throw his hat into the MasterChef ring in 2021.

And it is that star power which saw diners in their droves-including Team J’AIME-flock to Liam’s recent pop-up evening with Sauce Supper Club in Lichfield at their Thyme Kitchen headquarters.

An evening with Sauce Supper Club is always a top-notch affair, and Liam proved to be no exception. From the moment we stepped through the door, the convivial atmosphere, exemplary service and delicious food made it an evening to remember.

After being shown to our seats, we got our first look at the menu. What immediately stood out was the lack of meat, with just the main course out of five being meat-based. When he later popped over to our table to say ‘hi’, Liam explained that he wanted to showcase the very best in seasonal produce, and let those amazing spring veggies speak for themselves. Good on him.As a gluten-intolerant diner, my guest was certainly well looked after, with Liam tweaking each course to ensure her dishes were gluten-free but just as tasty. And that showed from the off, as she was wowed by Liam’s gluten-free bread, which was nibbled on as we perused the wine list. My own sourdough and Marmite butter was certainly moreish too; I’m not a fan of Marmite usually, but this butter was just sublime.

The first course proper was a celebration of that spring time hero; asparagus. Here, served with chive and black garlic emulsions and liberally sprinkled with sourdough crumb-gluten-free for my guest-it was dressed to its best yet still star of the show. Perfectly tender and exuding that wonderful freshness of British asparagus in season, it was a stellar start. 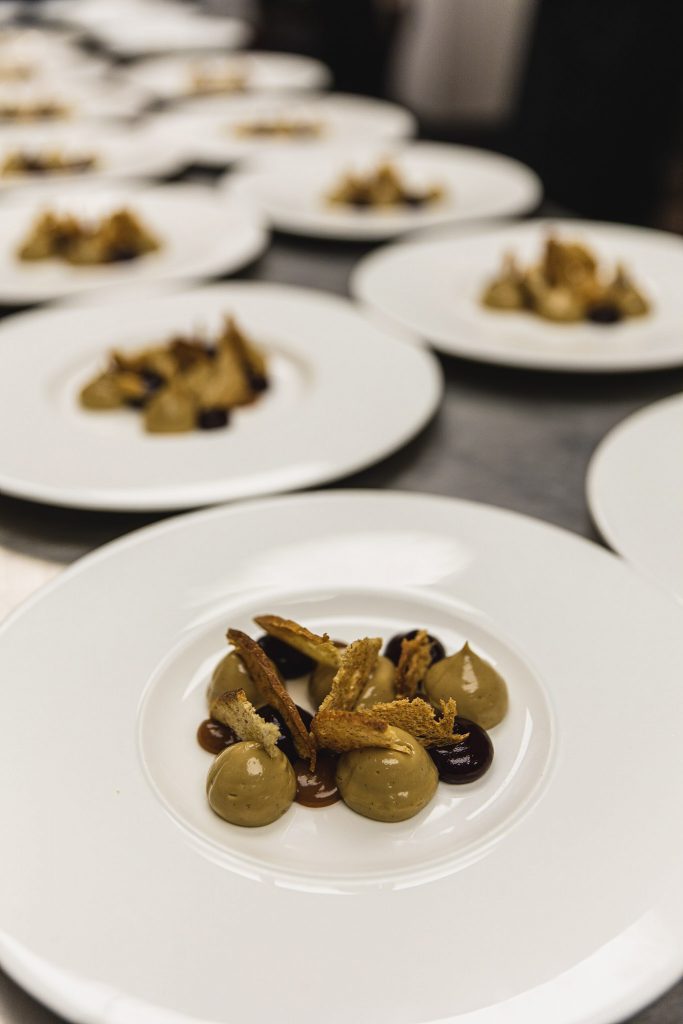 The dessert was a marriage of complex flavours.

And the seasonal stars kept coming, with Jersey Royals taking centre stage for the next course. Barbecued to perfection and accompanied by a beautifully light whipped creme fraiche, confit leeks ,leek puree and a dusting of ash-in keeping with the barbecue theme-it was a well-balanced dish, with lovely hints of sweetness coming from those glorious little potatoes and the leeks two ways, contrasted by a welcome tang from the creme fraiche.

Onto the main course, and it was time for a little something for all the meat lovers. The beautifully pink roasted loin of lamb was mouth-wateringly tender, accompanied by a punchy lamb jus and a delicately sweet wild garlic puree-another seasonal triumph. 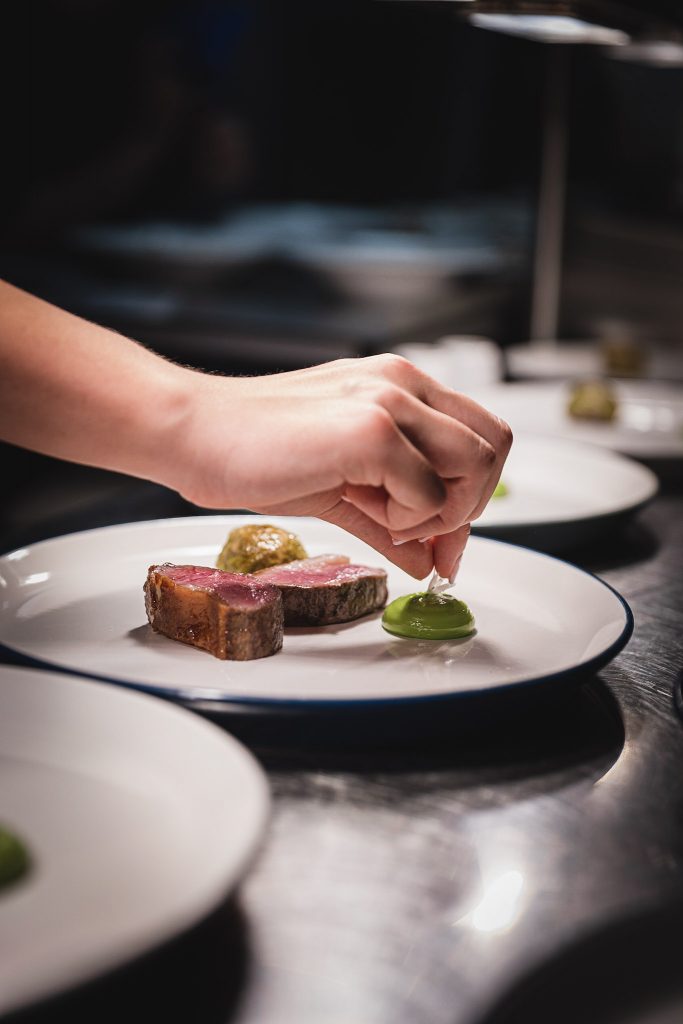 Putting the finishing touches to a dish.

But the standout on the plate took me rather by surprise. I’m by no means a fan of offal, but the offalchoux farce-a little offal meatball wrapped in a cabbage leaf-was packed with flavour, a real bite of deliciousness which quite frankly stole the show. The pre-dessert showed off Liam’s playful side-something which didn’t always come across in theMasterChef kitchen-with his Jammy Roger. A play on his name, it was a fancy riff on a British tea time treat, the humble biscuit elevated to new heights with a rich, buttery pastry and sweet yet tart rhubarb and custard filling.

It set the scene for grand finale, and when three of the four elements of dessert are listed as artichoke, miso and sourdough, you know you’re in for something a little different. A complex marriage of flavours and textures with purees of artichoke, miso and blackberry accompanied by slivers of toasted sourdough, it was a thought-provoking and accomplished dessert which showcased Liam’s culinary chops and ambitious style.

As busy as he was in the kitchen, with a packed restaurant of eager diners, Liam made sure to do the rounds among the guests, chatting away and answering questions with the ease of a man who wasn’t in the middle of a demanding service.

Following his MasterChef stint, Liam travelled to Dubai to compete in the World Young Chef Young Waiter competition, placing an impressive third in the chef category. And his ambitions don’t stop there.

With starry dreams of his own, dining in a Liam Rogers-owned restaurant could easily be on the cards in the future. But wherever the next step in his journey takes him, he’s certainly one to watch.