A three piece suit handmade by Mark Purcell using British woven wool is likely to set you back around £2,800 and take at least three months to be made – yet he has people queuing up for them.

The 52-year-old, who works out of a converted garage at his Handsworth Wood Home, has made suits for everyone from pop stars to wealthy businessmen. He makes plus fours for the landed gentry and has even made frock coats for an ancient order of woodsmen, including leather pouches to hold their arrows.

His USP is that he’s a true craftsman in an automated age – doing everything from measuring to design concept and from pattern cutting to sewing personally, often using traditional methods.

“A lot of people call themselves a tailor and a lot of people use the work bespoke, but there aren’t many people around who are doing what I do,” he said.

“I’m the only remaining apprentice-trained bespoke tailor in Birmingham. I like to think of myself as a true craftsman, a true tailor.

“I’m first and foremost a coat maker, although I can do every other part of what it takes to make a three piece suit.”

Mark didn’t actually start his tailoring apprenticeship until the age of 27, after first training to be an engineer. 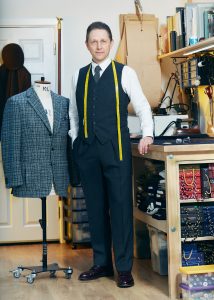 It may seem an odd transition, but he says there are definitely transferable skills between the seemingly very different worlds of work.

“I spent four years working in a factory, training to be an engineer and initially thinking that was what I wanted to do with my life. It was only later, when my love for tailoring developed, that I realised that was where my passions really lay.”

Mark was house sharing with friends who were in a band during his engineering years and found himself hankering after a taste of their creative lifestyle.

“I thought it looked like they were having an awful lot more fun than me. I’d always wanted to be a craftsman. I decided to pack in the engineering, do some travelling with my friends’ band and then look at finding a career afterwards.

“So I basically did an engineering apprenticeship then ran away with the circus. When I wasn’t driving them to gigs I was learning to sew at night school and making shirts and suits.”

Mark was making clothes for himself and his friends, sometimes the more flamboyant the better, and getting involved in the local music scene.

“A chain of events led to me working with fashion designer Patti Bell, of the fashion label and boutique Kahn and Bell opposite the Hippodrome in Birmingham.” 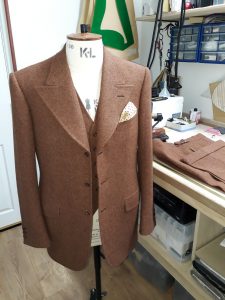 Patti Bell was at the forefront of New Romantic fashion and made outfits for many of the best known pop bands of the day.

“She could call Boy George and the members of Duran Duran her personal friends. She was Birmingham’s answer to Vivienne Westwood. It was very exciting for me to be a part of that.”

Mark is himself a good friend of Pete Williams, the bass player from 80s band Dexys Midnight Runners, and made suits for a series of shows the band performed at the Duke of York Theatre in London.

“Pete put in a request for a suit and I knocked it up for him as quickly as possible.”

He’s also made suits for a member of punk rock band The Ruts.

Mark set up on his own as Mark Purcell Bespoke Tailoring in 2013, aiming to use his experience working for Patti Bell and other later employers to offer a unique service as a complete craftsman tailor.

“I just wanted to be a craftsman. I didn’t want to work in retail or to buy in then sell ready-to-wear items. I just wanted to use my skills to make coats, suits and other items for people to invest in and wear for many years.”

As well as working directly for individual customers he has, over the years, made very special coats for a luxury brand in the south of England that supplies none other than Captain Tom with his coats.

It generally takes Mark at least three months to make each item, which includes fittings, pattern cutting and stitching the garment.

A three piece suit made with British woven wool costs in the region of £2,800, although Mark says people are less inclined to order business suits at the moment and more likely to be looking for bespoke countrywear.

“People aren’t in the office and they aren’t wearing a suit to work from home, so instead they’re investing in clothes for outdoor pursuits.

“At the moment I’m making a naval peacoat for a gentleman. It’s one key item that he’s going to be wearing for many years to come and probably handing down to future generations.

“It isn’t cheap to have it made but it isn’t until he’s owned it for 20 years and looks back that he’ll realise that it’s been a cheap garment because he’s had so much use out of it.

“A ready-to-wear coat might last you for three years before the cloth starts to go thin and you get rid of it. Where’s the economy in that?”

Mark says his customers are drawn from all walks of life: businesspeople, pop stars, enthusiasts for a particular era of fashion.

He says they can often be categorised as either connoisseurs or people with an unusual figure who buy items to fit them off the peg.

He even has one client who was bitten on the arm by a shark and needs clothes created to fit accordingly.

Perhaps because of his interest in the music scene Mark says his own preference is for flamboyant clothes, but that he always tries to gauge what might work best for the customer rather than himself.

“If you have flamboyant tastes then go for a suit with a flamboyant lining, but if you don’t then you should avoid that because it’ll start to annoy you and you won’t want to wear it.

“People are very critical of what they see. If someone walks into a room wearing clothes that don’t fit very well then we critique them, it’s a natural instinct.

“But if someone walks into a room in perfectly fitting clothes then it almost gives them an air of mystery, we don’t immediately feel that we know something about them.”

Mark mostly creates menswear but he does make clothes for women too, such as tailored country pursuits jackets.

He still makes clothes for himself when he has time, and tries to make sure he treats himself to at least one Mark Purcell Bespoke Tailoring item each year.

“It reminds me of the days when I used to go to the fancy silk stall and buy fabric to make a shirt I knew nobody else would be wearing when I went out.

“Most recently I’ve made myself a nice tweed bomber jacket. It’s good to be able to show these things to customers to give them ideas for the sorts of things they could have made too.”

A far cry from 80s pop bands, Mark says his biggest style icon was The Duke of Windsor.

“I admired him sartorially. The way he matched his clothes together was fabulous. When his possessions were sold off a catalogue was put together, and the suits were just fantastic. The colours and designs were fabulous. Such an inspiration.”