Award-winning Midlands street food favourites The English Indian are delighting diners with a series of monthly pop-up weekends at their Lichfield home. Amy Norbury popped over to give their newly expanded menu a try.

Fish and chips. When it comes to food, fish and chips are a national staple. The traditional Friday treat at the end of a working week, the ultimate comfort food and (whisper it quietly) one of the healthier options when it comes to takeaways. It’s just about as classically British as you can get. Until it isn’t.

If you thought the good old fashioned British fish and chips couldn’t be improved upon, then you’ve probably never sampled The English Indian’s fine fayre. And if you haven’t, it’s probably high time you did.

Lichfield street food favourites, The English Indian burst onto the foodie scene back in 2016 with their decidedly spicier twist on a takeaway classic. Taking the teatime staple and infusing it with a heady dollop of Indian spices created a foodie phenomenon so good they were named People’s Choice at the British Street Food Awards just a year after setting up.

A firm fixture on the UK’s festival list, you can find The English Indian touting their wares everywhere from huge occasions like Glastonbury and Latitude, to local festivals too – not to mention an array of street food events and dining clubs around the country.

And during the pandemic lockdown they brought a little bit of cheer to those dismal dining days when they popped up with their trusty van around Lichfield and the surrounding areas. 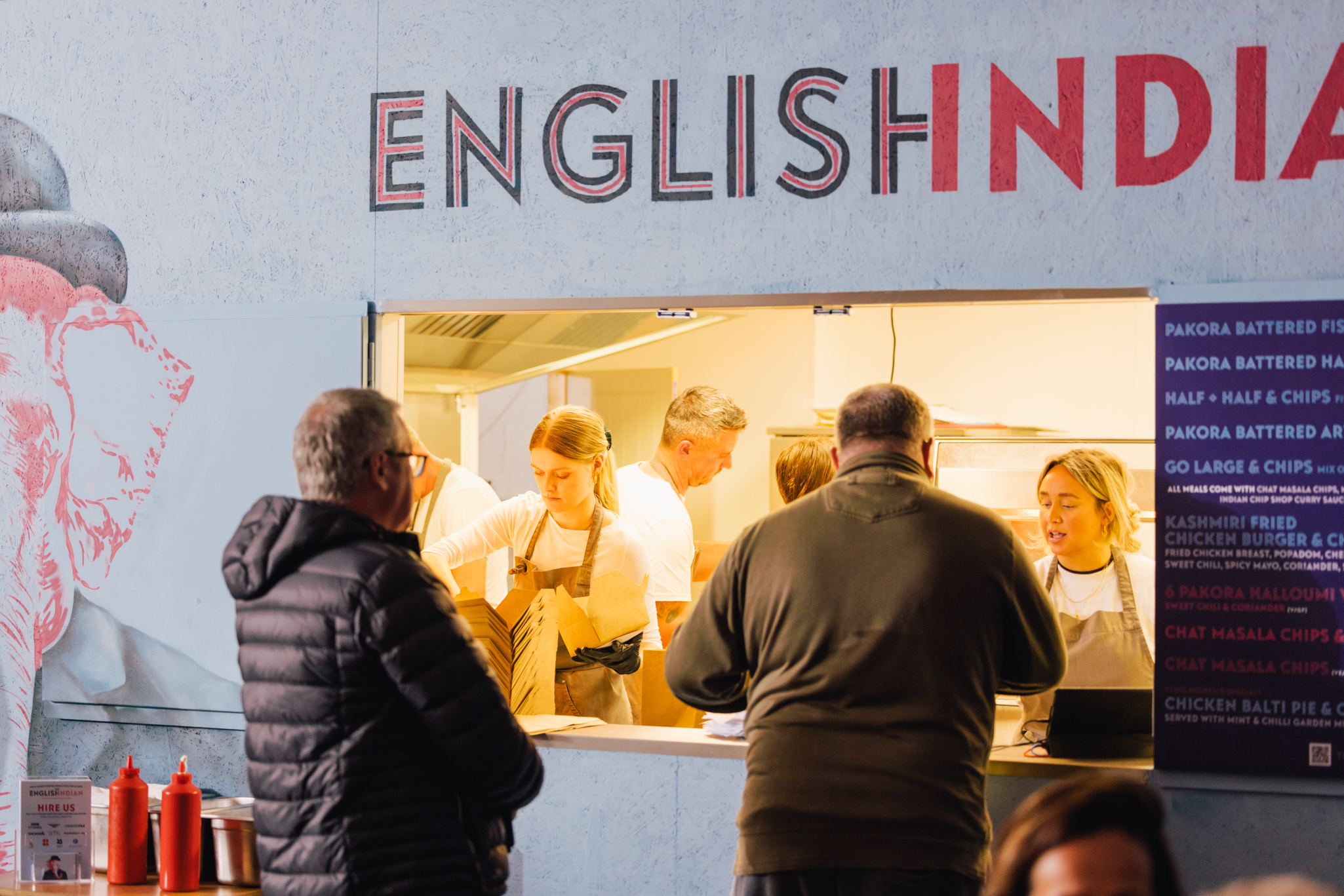 The English Indian’s Lichfield pop up.

The English Indian have gained a loyal band of foodie followers over the years, so when the news came last October that they would be opening up their Lichfield unit once a month for a pop-up dining event, it was greeted with great delight.

Ever since encountering The English Indian at Lichfield Food Festival many moons ago, team J’AIME have been fans of their small but perfectly formed selection of dishes. And with the promise of an expanded menu featuring brand new treats to try, we couldn’t resist checking it out.

Now, the location of the pop-up isn’t exactly glamorous – they’re based on an industrial estate just off the Birmingham Road, after all – but when we arrived we discovered the unit had been transformed into a rustic yet bustling dining space. Fairy lights and foliage aplenty gave the space a quirky, inviting vibe while music added to the convivial atmosphere, alongside the large wooden tables and benches for communal dining. 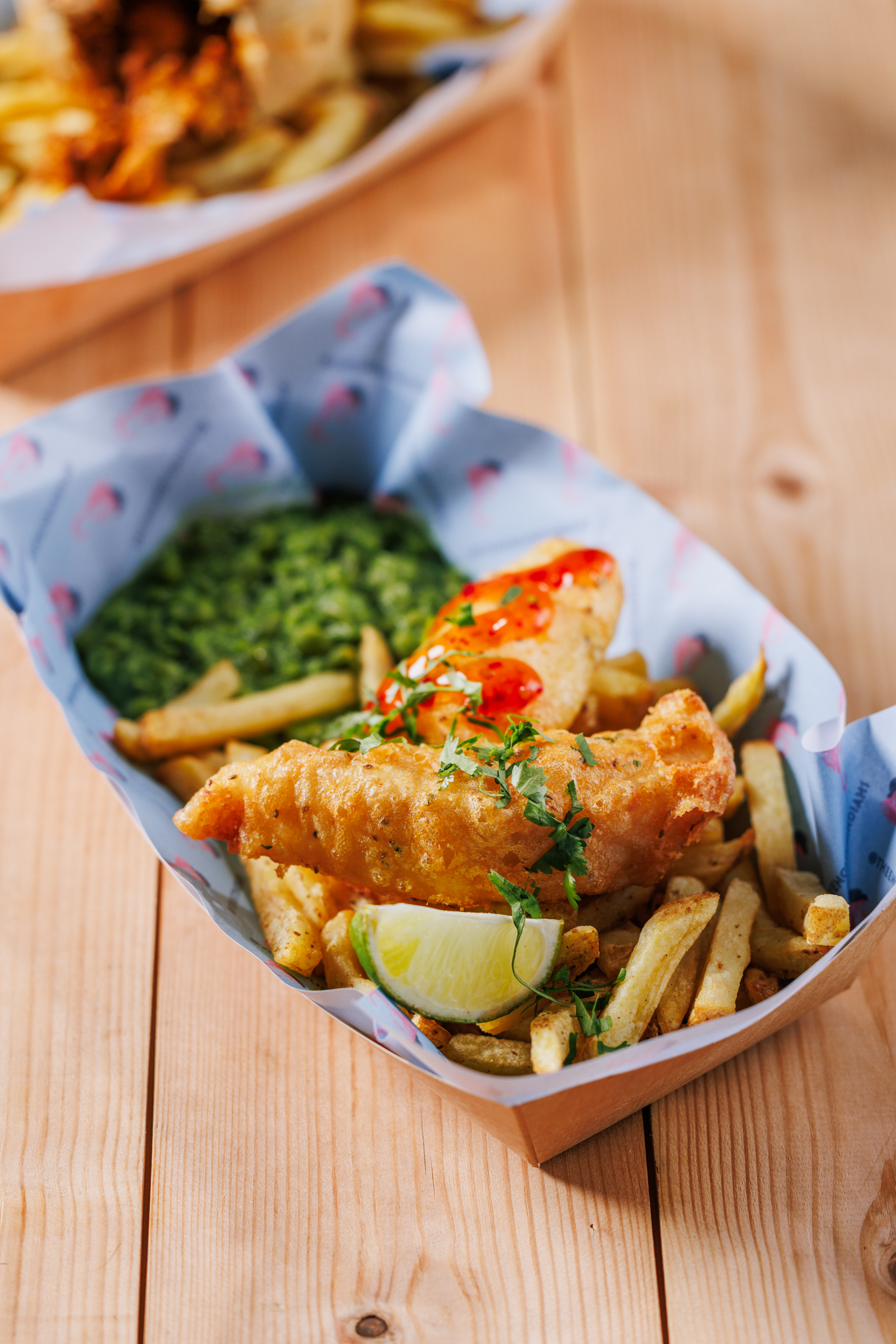 A bar stocked with prosecco, craft beers and plenty of soft drink options means you can enjoy a cheeky beverage or two while you dine.

The set-up is a casual affair; simply pop to the counter and place your order, then take a buzzer which will beep when your food is ready to collect. We managed to grab a drink and a seat before our order was ready, not much more than five minutes later.

As a huge fan of The English Indian’s signature fish and chips, my hubby stuck to what he knew – and he wasn’t disappointed. Beautifully firm fish in a crispy batter with a hint of spice, a pile of moreish chaat masala chips, unctuous Indian chip shop curry sauce and those delectable chilli and mint garden mushy peas are a match made in heaven. This is next-level fish and chips which delivers in spades on flavour.

I’d heard good things about the new Kashmiri chicken burger and couldn’t resist eschewing my usual fish-and-halloumi combo for something different. And I was so pleased I did. The chicken was succulentand tender, in a delicious spiced coating, laden with poppadom, cheese, lettuce, red onion, sweet chilli, spicy mayo and coriander. It was a behemoth of a burger, spilling out of its brioche bun, and with an accompanying heap of chaat masala chips, it was a hearty meal indeed – although so tasty I polished it off in its entirety. I did miss those exceptional mushy peas – but for £1 extra you can order a portion on the side. 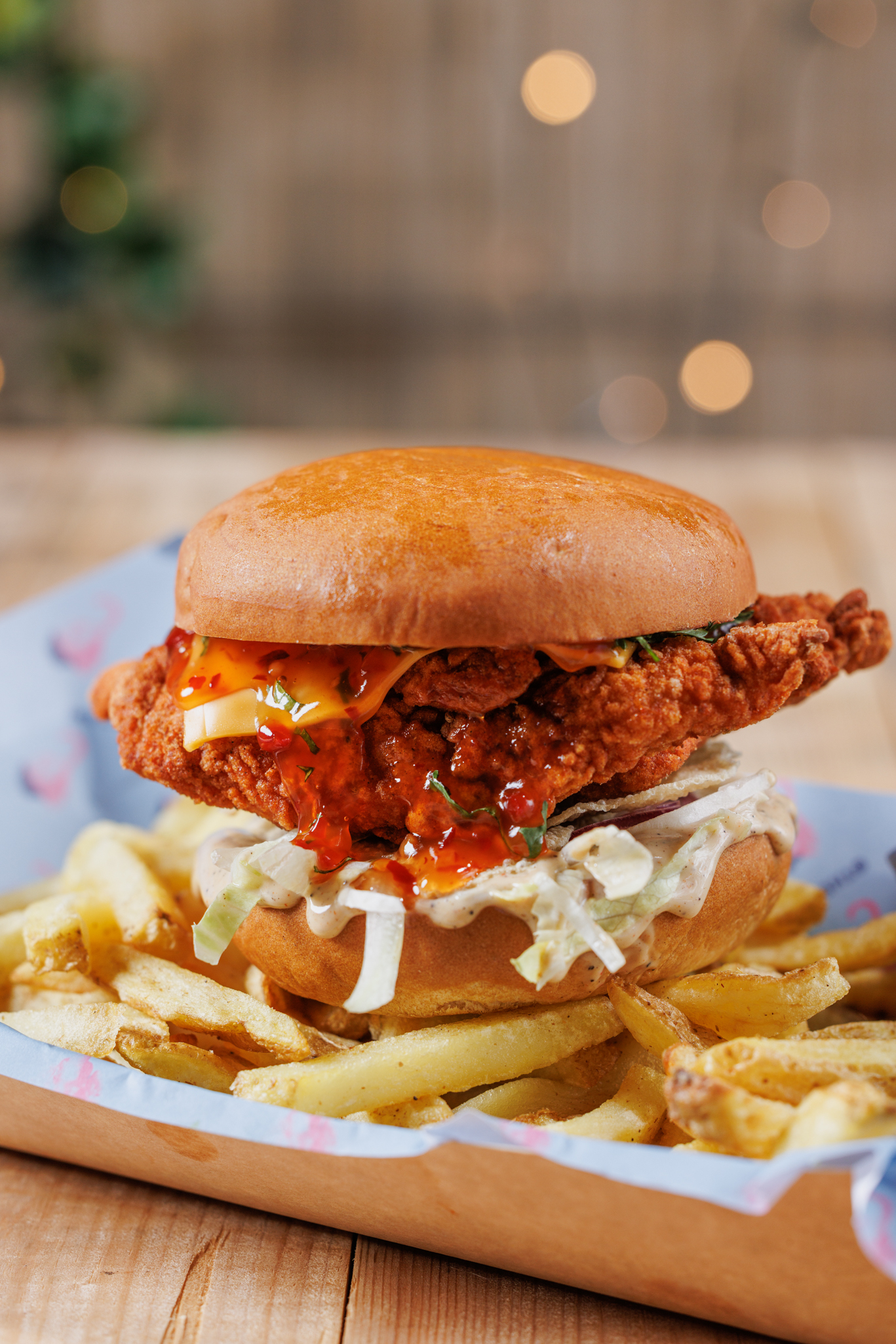 Not wanting to miss out on the fried chicken, my husband also ordered a side portion of Kashmiri chicken strips, topped with spicy mayo, sweet chilli, red onion and coriander, which he found just delicious. It meant that I didn’t have to share my burger either, so a win all round.

With vegetarian halloumi wedges and a vegan artichoke ‘vish’ option, the menu may be small, but it really does cater for everyone.

And when it comes to delivering on dietary requirements, one of the other attractions of The English Indian is that their entire menu – with the sole exception of their pop-up special, that Brummie favourite the chicken balti pie – is entirely, and most often naturally, gluten-free. The pakora batter which coats the fish, artichoke and halloumi wedges is made – as traditional Indian pakoras are – using chickpea-based flour, while the new Kashmiri chicken burger boasts a gluten-free breading and a specially-sourced gluten-free brioche bun. I’ve got several friends with gluten intolerances, and being able to eat from the same menu without compromises is a rare treat – while as a non-gluten-free diner, I noticed absolutely no difference in taste. 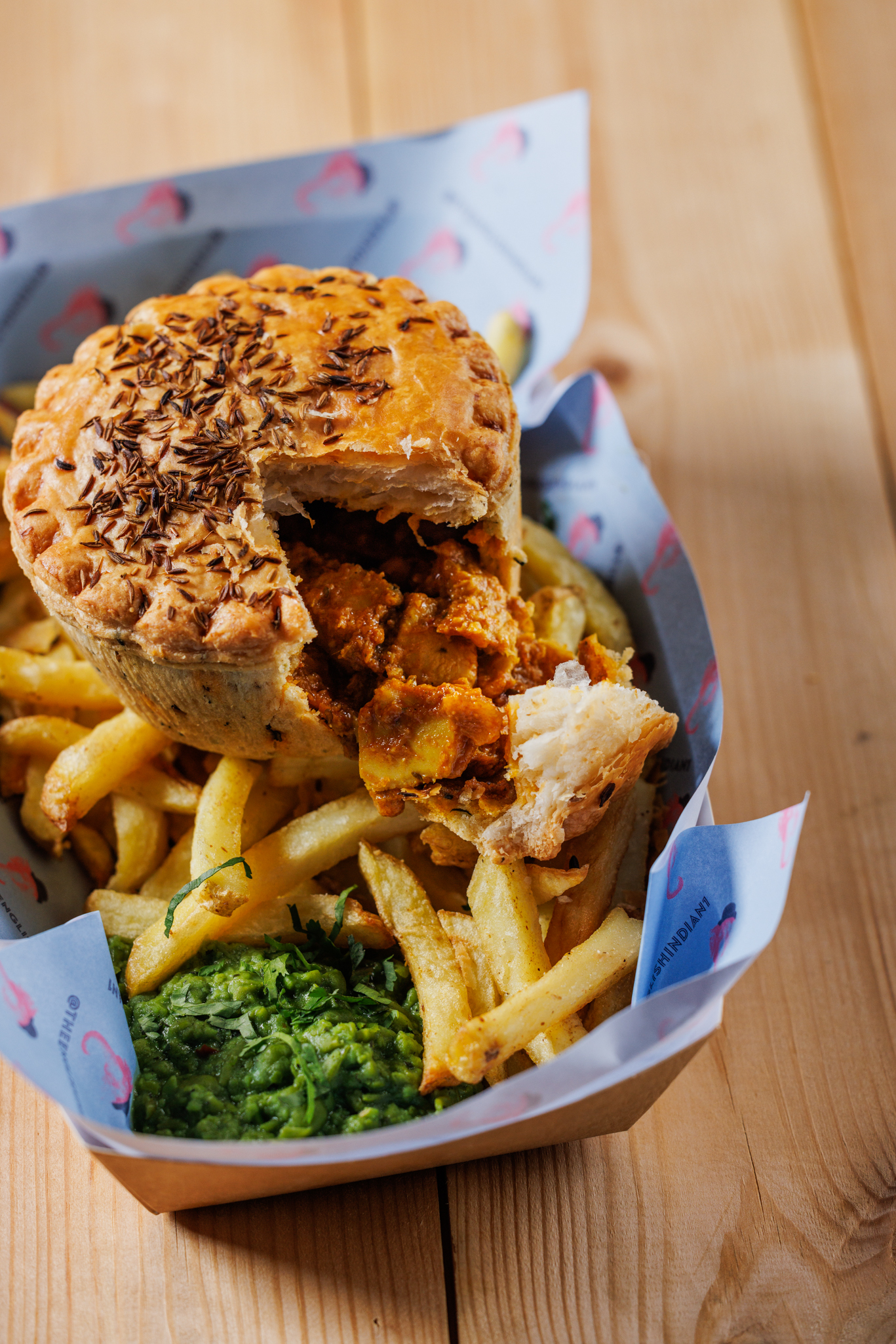 In fact, as we arrived at the pop-up, one of my gluten-free friends was just leaving, over the moon at finally having found a fully gluten-free chicken burger of such deliciousness and quality.