There’s music of all genres to enjoy around the region this month, plus appearances from comedy legends and everyone’s favourite Strictly judge…

What: Jasper Carrott’s Stand Up & Rock
Where: Lichfield Garrick
When: May 4 to 7

With a comedy career spanning five decades, Jasper Carrott is back where he belongs this May – up front and centre stage for Stand Up & Rock. Among Carrott’s many accolades are BBC TV Personality of the Year, a Gold Medal at the New York TV and Film Awards, Midlander of the Year Award, his own star on Birmingham’s Walk of Stars and the British Comedy Awards Lifetime Achievement Award in 2008. In recognition of his outstanding work for charity, he was also awarded an OBE in Her Majesty’s New Year’s Honours List in 2003.

Jasper is joined by friend and rock legend Bev Bevan (founding member of Electric Light Orchestra and The Move), who brings along his band with guest star Andy Bennett, former Ocean Colour Scene guitarist. Enjoy a night of fantastic comedy and great music to lift the spirits and remind us what life is all about! Tickets are £28.50. For more details visit www.lichfieldgarrick.com

What: Brian Downey’s Alive & Dangerous
Where: Tamworth Assembly Rooms
When: May 7

Often cited as an influence by the world’s top drummers, Brian Downey is in Tamworth for one night only, playing the songs he co-wrote in Thin Lizzy with his new band Alive and Dangerous.

Originally from Dublin, Brian enjoyed his first taste of success in Ireland with the top 20 hit ‘Morning Dew’ before forming Orphanage with Phil Lynott. The two went on to form the legendary Thin Lizzy with Eric Bell, and Brian remained a member until the band split in 1983. He’s since been in constant demand as both a touring and session drummer and regularly played live shows and recorded with renowned guitarist Gary Moore.

Now Brian returns with Matt Wilson on bass guitar and lead vocals, and Michal Kulbaka and Joe Merriman on guitar and vocals, in new band Alive and Dangerous. The doors open at 6.30pm for a 7.30pm start, with tickets priced at £23.50. For more information visit www.tamworthartsandevents.co.uk

Lichfield Gospel Choir are teaming up with The City of Lichfield Concert Band for an unforgettable evening of powerful, moving and entertaining music in support of Lichfield Cathedral this month. The Grade I listed landmark currently costs £5,000 a day to keep open and free for the city.

The City of Lichfield Concert Band is more than 100 years old and continues to entertain with a variety of genres such as pop, swing and classical, performed by its 50-member strong ensemble of local musicians. Lichfield Gospel Choir is a vibrant and joyful community choir with more than 100 members and a repertoire that covers African, gospel and soulful music – both traditional and modern.

Join the two groups for a reprise of their sell-out performance in 2019. Tickets are priced at £10 or £12.50. For more information go to www.thelittleboxoffice.com 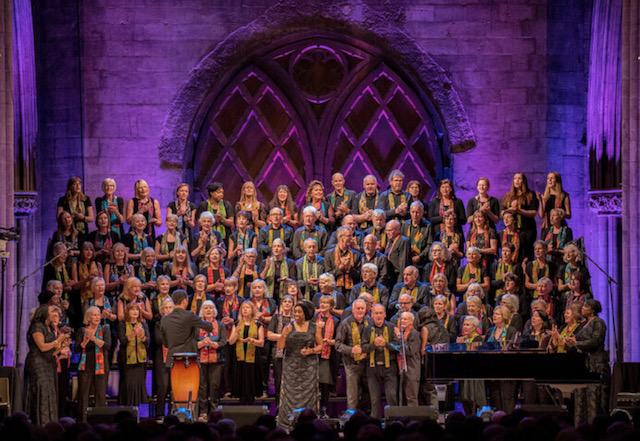 What: Springfest
Where: Curborough Countryside Centre
When: May 14 and 15

Browse wares from a range of independent local makers, designers and suppliers, and discover new delights for your home and garden at Curborough Countryside Centre’s Springfest event. Organised by Phoenix Interiors, this shopping weekend will feature traders galore, from independents popping up to the centre’s permanent residents, and is the perfect opportunity to find your next bespoke interiors or garden love.

Springfest will be open from 10am until 4pm on both days, with free entry and free parking. For more details visit www.curboroughcountrysidecentre.com or find Curborough Countryside Centre on Facebook.

What: Dead Lies by Hilary Bonner
Where: Lichfield Garrick
When: May 24 to 29

The story follows Peter George (Edwards), a politician who promises a new kind of politics beyond sleaze and spin. He is welcomed as a messiah by the British public and expected to restore trust in a broken political system. But a shocking secret lies deep in his past. As buried truths rise from the ashes, will his rise to power be destroyed by ghosts from another time?

Tickets are available from £27. To book, visit www.lichfieldgarrick.com

What: Craig Revel Horwood – The All Balls and Glitter Tour
Where: The Alexandra, Birmingham
When: May 26

The star of BBC1’s Strictly Come Dancing – the judge everyone loves to hate – is taking to the road with his first solo tour in 2022, and you can catch him at The Alexandra at the end of the month.

Join Craig as he talks about his life so far, from Australia to the West End to Strictly, reveals a wealth of backstage gossip with his trademark wit and candour, and gives a very special performance of some of the music which has been the soundtrack to his career. Tickets for this fabulous evening of entertainment are available from £23. For more details visit www.atgtickets.com/birmingham

What: Hot Chocolate
Where: Tamworth Assembly Rooms
When: May 29

For one night only, Hot Chocolate are in Tamworth! It was in the disco era of the mid-1970s that Hot Chocolate became a big success with hits like ‘You Sexy Thing’ and ‘Everyone’s a Winner’. Hot Chocolate started their recording career with a reggae version of John Lennon’s ‘Give Peace a Chance’ and went on to become the only group, and one of just three acts (the others being Elvis Presley and Diana Ross), to score a hit in the UK charts in every year of the 1970s.

In all, the group has charted 25 UK Top 40 hit singles, including at least one hit every year between 1970 and 1984. Their single ‘You Sexy Thing’ became the only track that made the top ten in the 1970s, 1980s and 1990s, appearing in a string of successful films starting with the 1997 comedy The Full Monty. Original lead vocalist Errol Brown left the group in 1986 with the current line-up fronted by Kennie Simon. Tickets are priced at £34.50. For more details visit www.tamworthartsandevents.co.uk

things to do what's on what's on Birmingham what's on Lichfield what's on Staffordshire what's on Sutton what's on Tamworth
Share. Twitter Facebook Pinterest LinkedIn Tumblr Email
Previous ArticleWorship Worth Experiences in the woods
Next Article Birmingham Royal Ballet at The Rep