Whether you fancy the idea of foraging for your own or just want to know more about how and where they grow, forest school training officer Duncan Coleman has the answer to your questions about mushrooms. Jenny Amphlett met him.

If I told you there was a mushroom that costs about the same as a piece of fillet mignon steak you
might not believe me. But I’d be right.
Chicken of the woods is one of the most prized cheffy ingredients – a wild mushroom that not only
looks phenomenal in any dish but also tastes remarkably like poultry.
I’ve never been lucky enough to find or eat one but Duncan Coleman, forest school training officer
with Staffordshire Wildlife Trust, has not only cooked chicken of the woods he grows them in his
own back garden.
The 40-year-old, who spends his days out in the Staffordshire countryside, is no stranger to spotting,
identifying and occasionally eating wild fungus.
“Autumn is typically seen as mushroom season as many species tend to fruit at this time of the year
but of course mushrooms are around throughout the year, you just might not be able to see them,”
he says. 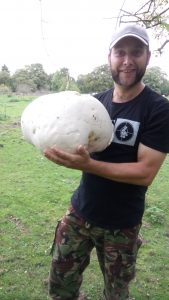 Duncan explains that when he’s teaching forest school techniques, whether that’s to children or
adults, his general advice is to not pick mushrooms and definitely not to destroy them.
“There’s a lot of fear of mushrooms because some mushrooms are poisonous and some are fatal,”
he says. “But you have to ingest them for them to be in any way dangerous to you. Mushrooms don’t
bite you or hunt you down. If you leave them alone they’re harmless.
“We’ve really only just started to understand the importance of the symbiotic relationship between fungi and trees. When you see a mushroom you’re seeing a flower, the fruit that the fungi sends up. The fungus is still there even when you can’t see a mushroom, but it’s under the ground or in dead wood.
“What we’re starting to discover is that a network of fungi join up lots of different trees. Fungi is
important for various different tree species.”
Duncan gives the example of fairytale red and white mushrooms (which are really called fly agaric)
which typically grow near silver birch trees.
“If you value the trees in your garden then leave any mushrooms that you see exactly where they
are, they’re doing a job.
“Similarly if you value your lawn then try to leave fungus alone. If you’ve got mushrooms in your
lawn it can indicate you have healthy flora, fauna and aeration.”

Incidentally if you do have mushrooms in your lawn then the chances are that they’re waxcaps,
some of which are protected.
Many people have reported seeing more mushrooms over the past year, but Duncan says there aren’t
necessarily more out there, it could just be that we’re more attuned to finding them.
“People are noticing more about the natural world because it’s become quite important for stress
relief to get outside the home. We wouldn’t necessarily have been doing that before COVID-19.
“Now people are using the outdoors for recreation more and more they’re noticing the little things
that may have been there all along but gone unseen.
“I don’t think this year is a particularly good fruiting year overall, although individual species like
different conditions.”
Species that Duncan has come across in Staffordshire include curry scented milk caps, which smell
like curry and contain a milky substance if a small piece is broken off.
He’s also found giant puffball mushrooms, which can grow as large as beachballs. He says it’s hard to
go out looking for them – you just stumble across them by accident.
You may really need to keep your eyes peeled when out mushroom spotting on your daily walk
though as Duncan says some varieties can shoot up within one day and then be gone just three or
four days later. 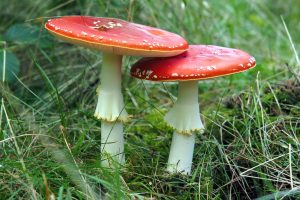 Rather than foraging for mushrooms, Duncan recommends people literally grow and pick their own
by introducing carefully selected species of fungi into their own garden.
“You can buy infused shitake logs or dowel rods with spores on them. That way you can grow your
own crop – you’ve put them in there so you know what you’re picking. I have king oyster mushrooms
and chicken of the woods growing in my back garden.”
He says chicken of the woods tastes so like meat that last year he turned some into a mushroom
version of KFC.
He may advise people against doing it, but if you’re intent on foraging for mushrooms then Duncan
says you should always make sure you seek the landowner’s permission first and should check out
any local by-laws put in place to stop foraging.
“It’s always a good rule of thumb that if you find a group of mushrooms you shouldn’t take more
than a third of them,” he says. “Leave plenty behind for nature as they’re a valuable food sourse for
slugs and small mammals.”
Duncan stresses that you need to be 100 percent certain that you know what you’re picking before
you pick it, preferably by doing some sort of training.
“Even if you’ve picked something that you know is an edible species, only try a small amount of it at
first, because people have different immune systems and allergies.”
He says that most mushrooms you’ll come across while you’re out walking wouldn’t taste very nice,
but there are a handful of species that will kill you if you eat them. 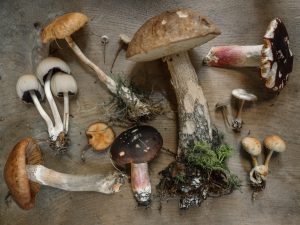 “There’s the Deathcap and the Destroying Angel – the names pretty much say everything you need
to know about them.
“The Deathcap mushroom leads to a particularly cruel death as people suffer incredibly but then get
better before their organs go into failure.
“There’s nothing that medical science can do about either of those mushrooms.”
Duncan says statistically it isn’t children who tend to be poisoned by mushrooms, it’s adults who
haven’t identified the type correctly or who have eaten lots of mushrooms that don’t agree with
their body in one sitting.
But he says he does understand the allure of foraging in the days of food accountability, where we
like to be able to know where our food comes from.
* In his role with Staffordshire Wildlife Trust Duncan delivers accredited forest school courses and
provides forest school programmes for schools and other clients.

featured food & drink midlands mushrooms outdoors people staffordshire vegan
Share. Twitter Facebook Pinterest LinkedIn Tumblr Email
Previous ArticleFrom Strictly stars to elite athletes: the Birmingham specialists keeping them injury-free – and how they can help you
Next Article What’s on (when nothing is on)