International dance artist and artistic director Sonia Sabri has helped transform the lives of women across the world. Jaspreet Shergill met her to find out more

This year is the 110th anniversary of International Women’s Day, which celebrates the cultural, economic, social and political achievements of women. The day is not only to celebrate these achievements but also to raise awareness of women’s equality. Sonia Sabri is an international dance artist and artistic director of Sonia Sabri Company, and amongst the most inspirational women working in the arts today . She specialises in traditional Indian folk dance in the style of Kathak and through her artform has helped women all over the world.
Wolverhampton-born Sonia was introduced to dance by her father at the age of eight. He wanted her to live his dream of becoming a Bollywood actor. Sonia was encouraged to enter this creative field despite being quite shy as a child. 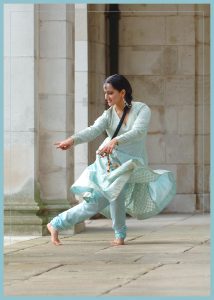 “It wasn’t really something that I wanted to do initially because as a child I was quite an introvert. I used to get bullied quite a lot at school so wasn’t the type to go into spaces where there were lots of people, so I think dance helped because I was able to gain confidence, but it was really for my dad,” she said.
“My parents come from working class families and I think when you see Bollywood films all the glamour, cars and the silver screen, it’s success as one would fantasise about and I think that was my father’s measure of doing good in the world and being successful.
“So, he put me into dancing and LAMDA drama training and I came to learn Kathak. I was actually going into another classical dance style, but we ended up at the MAC in Birmingham, he just said this looks like something similar that I’ve seen in Bollywood why don’t you just enter this class and that was it, I went into the Kathak class and never looked back.”
After falling into Kathak, young Sonia came to realise that this artform was so much more than just dance and movement. She began to flourish and discovered more about herself as a person. 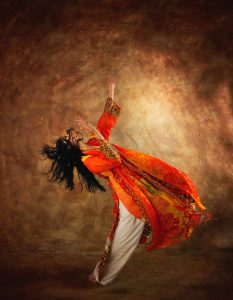 “It was kind of a calling at quite a young age. When we move we are able to express ourselves whether that’s through writing, dancing, playing musical instruments or singing it’s another way of expression. It’s not always about expressing through words so I think I found my way of expressing.
“There’s something about when I do Kathak, I know myself, I am truly myself, I would recommend dancing to anyone to feel that. It made me gain friends as well as gain a skill that is very specialised and one does feel good when you achieve something. I would definitely say that dance or any kind of artistic medium does support somebody’s self-esteem and self-confidence.”
Sonia became recognised internationally and performed on stages across the globe, winning awards such as The ACTA Award for Best Dancer 2016, The National Indian Arts Award for Dance 2017 and Women in Dance Leadership 2018 Award.
As a freelance dance artist, she also worked for the BBC.
“The only way to be taken seriously was if you had a company or an organisation so it felt like that’s what I needed to do.
“I would have to give full credit to my husband, Sarvar Sabri. He is a world renowned tabla artist and composer and comes from a lineage of seven generations of musicians from India and he said let’s start a dance and music company. 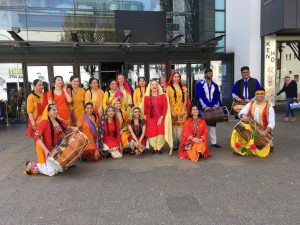 “Inherently our classical and Indian dance forms are driven by music, so we wanted to really bring that to the fore.
“Sonia Sabri Company is a dance and music company. We wanted to bring both of those assets into people’s appreciation of the art and once we started with the company, we began to get invitations to tour internationally.”

Sonia Sabri Company has collaborated with people such as Sir Trevor Nunn, Rose English, Lincoln Soni and Arlene Phillips.
Based in Birmingham, the company has had interest globally, creating opportunities for people of all ages and abilities to learn classical, contemporary and urban dance.
Sonia has developed a distinct style of Urban Kathak, taking inspiration from people and urban settings and combining it with traditional dance from the lands of the Indian subcontinent.
“We are proud to be located in Birmingham but we do a lot of work outside of Birmingham as well as internationally, so it’s great to be in the city which is so diverse, so young, so dynamic and I feel as a company and as artists and independent artists like myself we are placing Birmingham on the cultural map if not on the international map.”
Sonia Sabri company was invited by the Hippodrome to join its associateship in 2018 and has since developed and commissioned a new production called, Same Same But Different.
“Same Same But Different is a family show but catered towards children who are aged five and over and it looks at the curiosities and the fears they have of being different. It creatively questions how Kathak, contemporary, street and hip-hop dance and physical storytelling can be used to explore themes of identity, difference and belonging.
“We are looking at the diversity of our society and how cultural differences make society more valuable rather than it being seen as something that is misunderstood.”
The Hippodrome has also supported the music and dance company in creating short pieces for festivals.
““We presented a preview at their 120th Gala birthday celebrations and as South Asian artists we felt really proud to be the torchbearers of championing Indian music and Indian dance.

“It was a milestone event and I got some of our young students to perform as well who are mainly young Asian women. It’s history for everyone and I hope they will continue to bring in a more representative programme in the coming years.”
It can be difficult to enter the arts industry and even more so as a South Asian woman. There is a lack of representation of women leading creative organisations and Sonia stresses the importance of working together.
“I think we’ve had to and we continue to fight for our value and worth just being in existence in a female soul in a female body and that’s the first obstacle we are still trying to overcome now.
“Being a South Asian woman in the arts is even more important because the arts is a way to not only understand ourselves in the context of our Asian community but how the Asian community fits in the context of mainstream society.
“We have to think about dance or South Asian arts beyond what it is in its preliminary form. It’s what it does, it’s how it makes us feel, it’s what enables us to conquer the obstacles.
“We don’t have enough role models and I completely understand why. I come from a background where women aren’t supposed to even laugh out loud let alone dance so if I’m not able to express myself there is a fear of what other people might say.
“We have to break away from this backward thinking. It’s not only about women coming together, it’s about the whole society coming together for women.”
This year’s theme for International Women’s Day is #ChooseToChallenge, to call out gender bias and inequality. Sonia is a huge supporter of this and is making a change through her artform.
“I want to place a pledge on finding out why we continue to have this inequality and particularly for Asian women and girls. It’s imperative that we continue with those discussions and bring people on as part of those discussions. As women and girls we need to have a voice and come together collectively but then also we need to have our brothers, our fathers, our uncles and everyone else in the community to be part of the same focal
point.”
Due to the pandemic SSCo have transferred to online dance classes and are also developing a women-only project for those who are isolated, have low self-esteem, are from busy households and who need time for themselves. Sonia is doing workshops attended by participants who have been referred by their GP.
“I’m beginning to see change just within the women and the girls who are attending the dance classes, some of them have left very difficult home situations because they found the confidence because of the dance classes. They were alleviated from their depression and their anxiety.
“Some of them are quite vulnerable and under the mental health radar and what we’re trying to achieve with the dance is for them to feel human. Once they’ve felt that feeling they can take charge of their life and there have been such positive changes.
“They have understood that this is not something about flaunting their body or about exhibiting their physique; this is something much more spiritual and emotional that strengthens women mentally. It changes the emotional strength of somebody and that is exactly what I want to promote.”
“We have to feed our souls and that’s what creative arts does; if our soul feels good, if our soul feels replenished, then we as people will become better human beings and this is what the world needs right now.”
To find out more information about Sonia Sabri Company visit https://www.ssco.org.uk