National treasure Su Pollard has been a fixture of British TV, theatre and panto for nearly five decades. Katy Edgington learns more about her new tour

The ever bright and effervescent Su Pollard first made her television debut on Opportunity Knocks in 1974, where she came second to a singing Jack Russell terrier. Best known for her role as Peggy in the BAFTA-winning sitcom BBC One sitcom Hi-De-Hi, Su most recently graced our screens as a contestant on Celebrity MasterChef last summer and in the Christmas Cook-off.

Putting her somewhat controversial ham hock, broccoli, apricot and kimchi sandwich behind her, Su is about to embark on ‘an evening with…’ tour, which is sure to be filled with laughter and a few tears. The tour, which has been in the making for several years, starts February 2 and runs until the end of March. Fortunately, Su has never minded travelling and enjoys the camaraderie of being on the road. This is the first tour of its kind she is doing, so I wondered why now and what can audiences expect?

“I did a show about 30 years ago with a 10-piece orchestra, so when I was offered this I thought ‘that might be rather nice’. In these uncertain times you’re just trying to offer people lighthearted entertainment. It’s a mixture of everything, a few songs, anecdotes and chats, with a meet and greet beforehand”.

As well as talking about her exceptional +45 year career, Su will also be opening up the floor for audience Q&A. But is there any question she wouldn’t answer?

“Probably not,” she ponders. “It just depends how it was asked and how I could formulate an answer. If there was a question I thought might be a bit personal, I’d have to think on my feet because these things can be misinterpreted. You have to be a bit careful, but I wouldn’t want to be totally censored. I’d like to be as honest as I can.”

From the Midlands to Maplins

Born in Nottingham in 1949, Su embraced the freedom of growing up in the Midlands in the 50s and 60s. The tour will visit intimate venues of around 400 seats including The Palace Theatre in nearby Newark, but won’t quite take her back to Nottingham, where she discovered a lifelong love of the entertainment business.

“I’d go three times a week to the local amateur theatre group and it was terrific. I started when I was 11. I love Nottingham; it’s a great, vibrant city in my view, but equally I wouldn’t want to leave London because I really love it here.”

Despite a staggering list of TV, film, West End, theatre and pantomime appearances (not to mention a hit single) many people still know Su best as Peggy, the chalet maid and eventual Yellowcoat, from Hi-De-Hi. The show aired between 1980 and 1988 and made Su a household name. She believes there is a simple reason for its enduring popularity.

“I think it was because it had a lot of heart to it – it was real,” she says. “I mean, I know it was high comedy but it was all about people that wanted to better themselves. Look at poor Yvonne and Barry – terrible snobs, but they were trying to get on in life – and so was poor old Ted Bovis. All Gladys wanted to do was love and be loved in return. And because it was silly kind of stuff, anyone could love it – 8 year olds could love it and so could 80 year olds. The characters were probably like your friends in real life. We’ve all known a Gladys, and we’ve all known a Miss Cathcart.”

Making the most of what she’s got

From acting to singing to writing, Su has done it all over the course of her career. For her, the medium is secondary as long as the topic is interesting. The acclaimed one-woman hit play Harpy has been a particular highlight, in which she explores her character’s struggles with mental health and loneliness, as manifested through extreme hoarding.

“Harpy is an old-fashioned word for somebody, like a bird, that swoops down and grabs everything and takes it back to its nest – so a hoarder, basically,” she explains. “The writer, Philip Meeks, did ever such a lot of research. There are millions and millions of hoarders around the world, so it’s always going to be relevant. It’s usually to do with something the person has lost years and years before. It goes much deeper than just keeping stuff. I loved doing that play.”

Su counts Les Dennis and her Hi-De-Hi colleagues as some of those she has most enjoyed working with, feeling very fortunate to have worked with so many like-minded people who take their work seriously, but have fun as well: “Every day, if you can, you make life as pleasurable as you can for yourself and other people, I think. If you’re working together you have a duty to do that.”

The energetic, bubbly and colourful Su you see on screen is very much what you get in real life: “I do like to be on the go, as it were. Even when I walk, I walk fast. But equally, when I do get some downtime I might watch a movie or something. I don’t just sit about, generally, because I think you’re a long time dead. I’ve been fortunate; I think if you’ve got energy and you’re lucky enough to be healthy, you have to make the most of what you’ve got.” 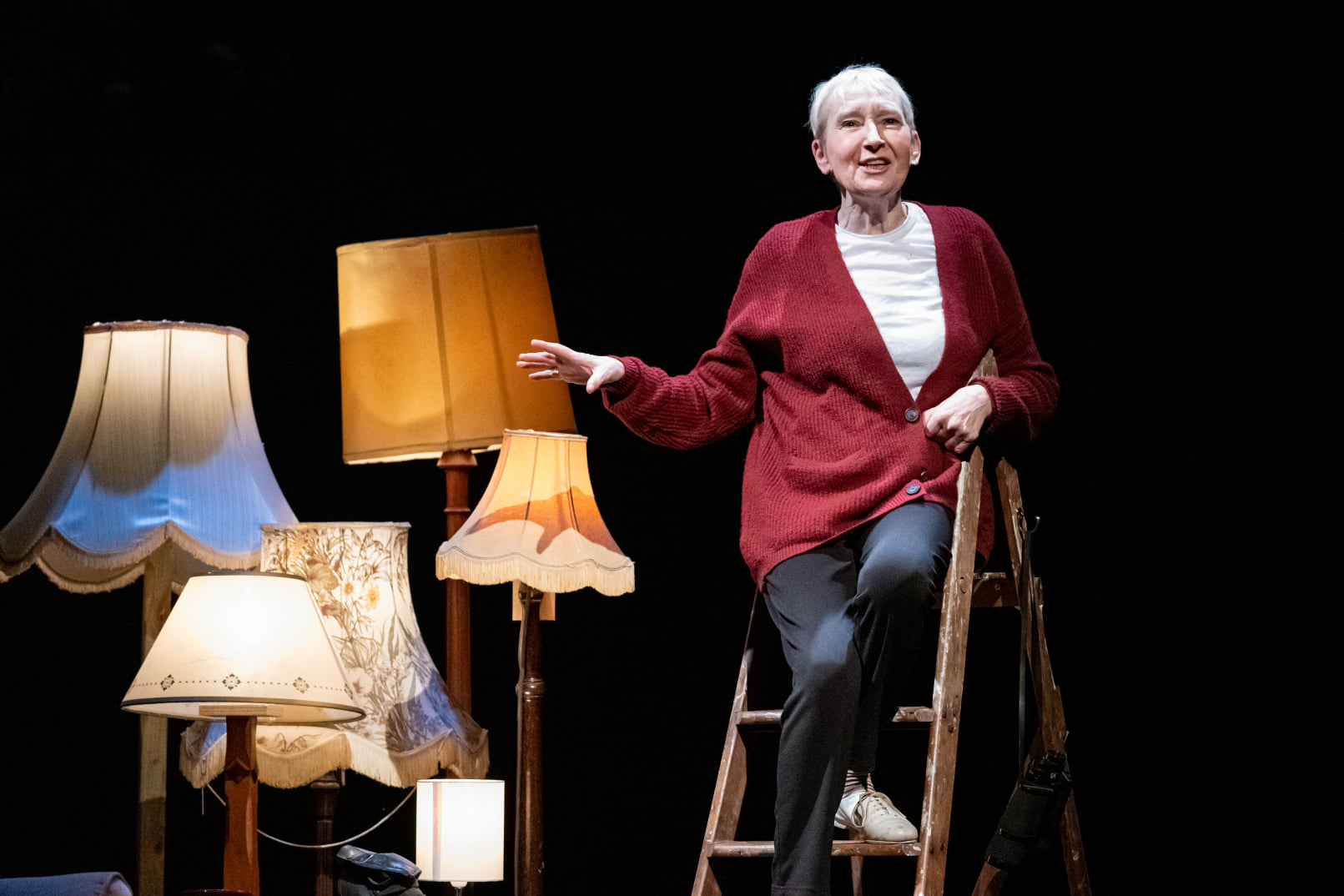 This philosophy shone through on Celebrity MasterChef 2021, which was won by Paralympic athlete Kadeena Cox. After being asked by an old friend from This Is Your Life, Su agreed to get involved partly because of the ongoing effects of the pandemic.

“None of us could work, per se, at the time and so I had plenty of time to prep and get the ingredients. It wasn’t so much pressure as it might’ve been if I was doing a show as well. When you do MasterChef you realise that there’s a lot of effort involved, not just from the person participating, and it’s a lot of commitment. It’s not just cooking, it’s all the other elements that go with it. You are nervous, because if you’re out of your comfort zone you’re going ‘what am I doing? Is it going to be alright? What if I burn everything?’”

In the end she thoroughly enjoyed the whole experience and even bought herself some serving spoons and proper measuring spoons! Despite learning all about sauces and spices, she confesses she hasn’t been putting that newfound knowledge to great use.

“I haven’t really done that much cooking since, but I am that much better than I used to be,” Su says. “So it proved to be very beneficial for me, to be fair. And I met some great people so it was a really good experience.”

‘I could howl here with the wolves!’

Following on from the tour, Su will star in Tickledom, a West-End-style family musical in which she plays Fluella the icy cold witch alongside a host of colourful and curious characters all based on plants, flowers and herbs.

“I wanted to do it because there are some great numbers in it – the music is fabulous,” she says. “It’s only on for about four or five weeks, but it was something that caught my interest. Beyond that, I don’t really know. I might even give myself two months off and go travelling, for pleasure you know.”

Su has certainly been lucky in the sense that her work has taken her all around the world, travelling in Southeast Asia, Oman, New Zealand, Australia, America and India. Top of her list of holiday destinations is a rather unlikely choice – perhaps for anyone but her.

“I’d like to go to Antarctica. There was an article in the paper and I thought ‘wow, this is really fabulous’. It was a little island populated only with wolves. I thought, ‘I could howl here with the wolves’. You could yell to your heart’s content! You’d probably have to get special permission to go there. I’d definitely love to fulfil that, but we’ll have to wait and see.”

oh….and another thing….An Evening With Su (POLLARD) will be at Tamworth Assembly Rooms on Friday 4 February. For tickets visit www.tamworthassemblyrooms.co.uk