Jenny Amphlett met the brains behind Grubby – a new plant-based recipe subscription box that was dreamt up in Lichfield.

When foodies across the UK sign up to receive a Grubby recipe box they’re buying into an idea dreamt up by a Lichfield boy who cut his culinary teeth working at Thrales restaurant in the city.

Each week people the length and breadth of the country are buying boxes of ingredients to cook up vegan dishes invented by Martin and his team at their experimental kitchen.

Currently based down in London, the 29-year-old honed the idea for Grubby when he returned home to live with his family in Lichfield during the first lockdown.

“I’d already launched Grubby in a different way, through vending machines, as a way for people working in offices in London to pick up healthy and inexpensive ingredients for recipes that they could take home to cook. They could scan a QR code, buy the ingredients and then go home with a recipe card.”

But then COVID-19 hit, offices closed and Martin found himself back home in Lichfield. 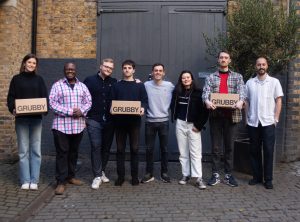 There are now 11 people in the Grubby team.

“I’d launched the vending machines in three London offices, but then offices closed. I had an investor and we came up with the idea of raising money and putting some recipe boxes together to help NHS staff.

“At this point I was in lockdown with my parents in Lichfield but I managed to put together and deliver more than 1,000 recipes boxes to hospitals in London. It was all paid for by donations.

“I started to realise that plant-based recipe boxes were a business model that would work, and we already had the operational procedures set up for the NHS boxes.”

Martin had a website built from scratch and the first Grubby boxes went out to homes in May 2020. He personally delivered the first boxes himself using his bike.

He quickly joined forces with a start-up cycle courier, so that all London boxes are delivered by bike. At Christmas Grubby launched nationally, including to Martin’s family back home in Lichfield.

There are now 11 Grubby team members and they work out of a development kitchen in Hackney, London. 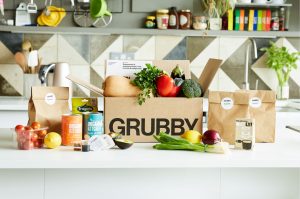 They offer weekly or fortnightly subscriptions which include the ingredients for two or three vegan recipes, with each recipe designed to serve two to three people.

He may have set up a plant-based recipe subscription service but Martin is not vegan himself.

“I eat plant-based food four or five days each week, which is a big increase for me as I used to eat meat every night of the week. I think for a lot of people it comes down to traditions and what they learnt in the kitchen as a child.

“Changing that mindset can be a really big shift for people. Having plant-based food that is accessible and convenient helps. The premise at the beginning was to try to make things simple for people, and we’ve done that.”

He says around 70% of Grubby’s customers are flexitarian rather than vegan.

“It shows that the sort of people eating plant-based food is changing. People are changing their eating habits and replacing meat or fish from some of their meals.”

Sustainability is key, hence the cycle delivery in London. Grubby also uses as little plastic as possible and works with a UK-based farm that grows organic vegetables.

Martin chose to call his business Grubby because it’s gender neutral, eye catching, links back to the soil on fresh vegetables and ‘because there’s a special wrongness about the word Grubby’.

He started work at Thrales in his mid-teens, and says he was thrown in at the deep end and helped cater for weddings at Tutbury Castle.

He went on to study hospitality and business management at Oxford Brookes University, which included a stint working for Cunard aboard the Queen Elizabeth. He’s also worked at the likes of Royal Ascot, international golf tournaments and most recently as the business manager for an office restaurant company.

Launching a new business during a global pandemic is undoubtedly challenging, but Grubby has grown quickly enough to already need a team of 11 staff.

“COVID-19 has meant people are replacing going out for meals with food experiences such as Grubby. We’re offering something a bit different and firmly believe that cooking should be pleasurable, it should be something people enjoy.

“We even put together a Spotify playlist for every recipe, so that people can listen along while they’re cooking. Food should be fun, enjoyable and relaxing.”

To find out more about Grubby visit www.getgrubby.co.uk  J’AIME readers can take advantage of a £10 discount off their first Grubby order by using the code JAIME10 on the website.