Tell us more about your background and how long you’ve been at Hoar Cross Hall.

I joined Hoar Cross Hall back in November last year, two days before the lockdown! Although I’d have loved to have dived straight in, I’ve been great utilising the time to plan and prepare. I’ve been rewriting menus for every restaurant, building our team – we’ve brought on board another seven chefs during lockdown and we’re still looking to recruit further.

I’ve been a chef for 34 years and have worked all over; from conference centres and Michelin Star restaurants to Rosette awarded restaurants and everything in between both nationally and internationally. 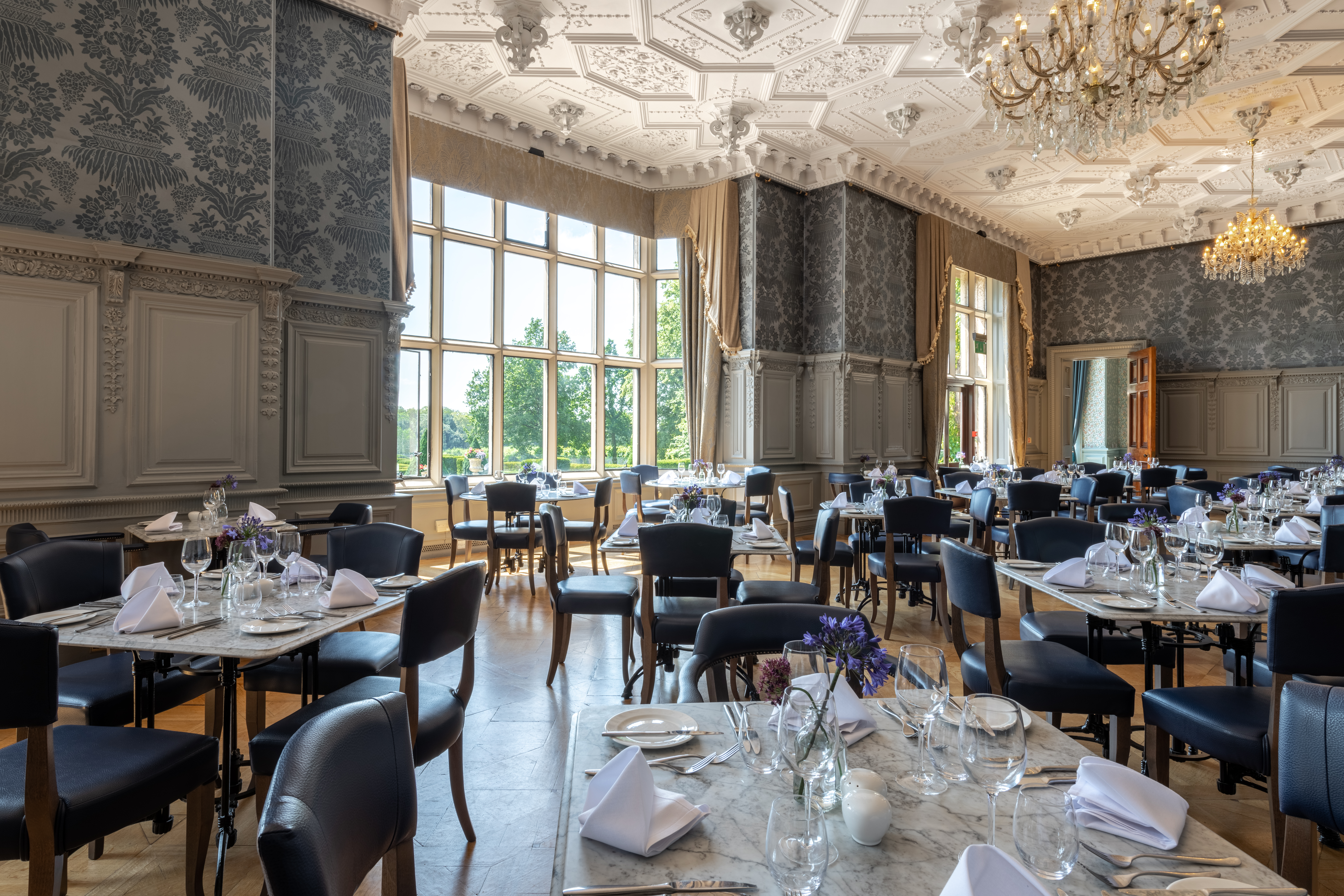 Do you have a specific vision for the dining experience at Hoar Cross Hall?

My main goal for The Ballroom is to achieve the second AA rosette. It’s going to take some time, but we have one rosette at the moment and it’s really important to me that we maintain that standard and continue to grow.

Sustainability is also hugely important, and we’re very lucky to have such vast grounds that we’re able to grow produce on. We make sure that the vegetables we use in our menu are aligned with the season, and we’ll be changing our menus four times a year. We’re also in the process of expanding our vegan options, including a dessert menu that is exclusively vegan.

Do you try to include Staffordshire and Midlands food where possible and are there any particular local suppliers that you’d recommend?

Absolutely! We’ve got a big herb garden on-site that we use on a daily basis, as well as a wild garlic patch down in the woodland. I’m also in regular contact with our Head of Grounds, so that I can prepare to harvest other produce, such as figs from our trees later on in the year.

Since arriving at Hoar Cross Hall, I have worked hard to cultivate great relationships with local suppliers – for example we’ve sourced red meat, poultry, pork and fillets from between a mile and three miles down the road. Part of our sustainability focus is trying to keep those food miles low and also help with local food provenance as well.

In terms of UK suppliers, I’m really focusing on British cheeses. I’ve recently added a Cornish gouda to the menu, a beautiful Windrush blue which is sourced from just outside of Bristol and a cheddar from Cheddar! It’s important to me that the cheese in our dishes is regional as that gives us the best possible produce. 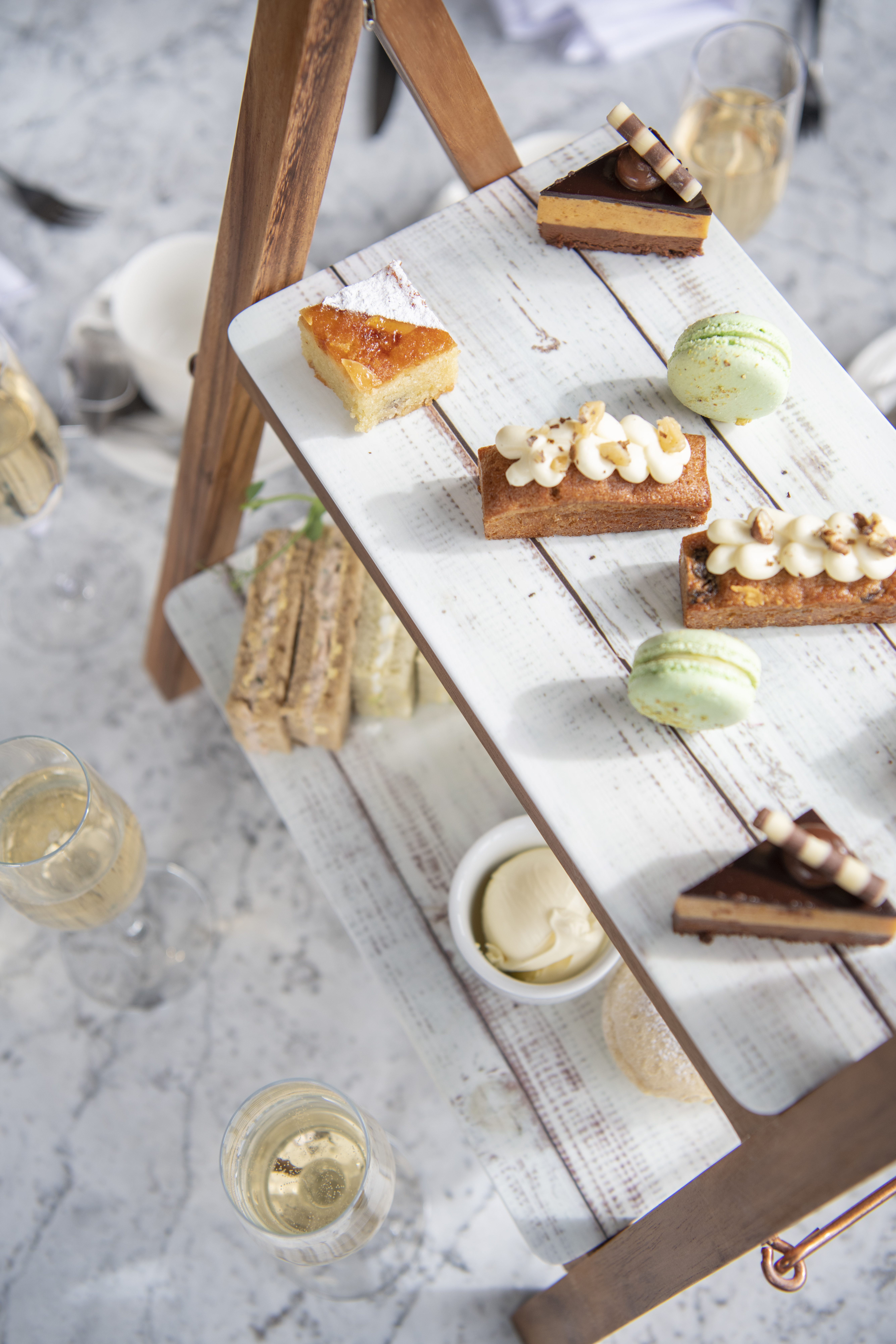 In terms of the dishes themselves and the new menu, do you have a hero dish that you’re particularly proud of?

There’s a cheese starter dish that is one of my personal favourites and it’s just won silver in an international competition. It’s nice and seasonal and includes three different beetroot variants – a candy, a golden, and a classic – with different pickles across each one, and served with a British goat’s cheese, which is just beautiful.

We’ve also got a tortellini dish, which just won Gold Best in Class at another international competition. The pasta is completely vegan, with flax seed used instead of the egg, and wild garlic from the estate used to make the pesto with some roasted hazelnuts, a warm sweetcorn panna cotta and a nice mushroom broth. It’s a stunning dish, both in flavour and presentation, and I’m very proud of it.

Is there anything you do specifically to get the best out of your team and really motivate them?

The last year has been very difficult for everyone, so my biggest priority for the team has been retraining, with a particular focus on making both the staff and guests feel safe after such a long period of lockdown.

I come from a military background, and still serve now, so can be very military in my way of teaching and mentoring. I’m a true believer in investing my time into training in order to support my team and get the best out of them.

It’s absolutely vital to have an amazing team supporting you when working in the culinary world, and I’ve managed to recruit a really nice bunch which I’m really proud of. So now it’s just a case of keeping them engaged, ensuring that they really are enjoying it and that they’re getting to input into the menu options.

Something I’m always repeating to my staff is that we are always at someone’s special occasion. Whether that’s a birthday, anniversary, wedding, funeral, Christmas or Valentine’s, every meal is an event and we are passionate about reflecting that in our food and service. 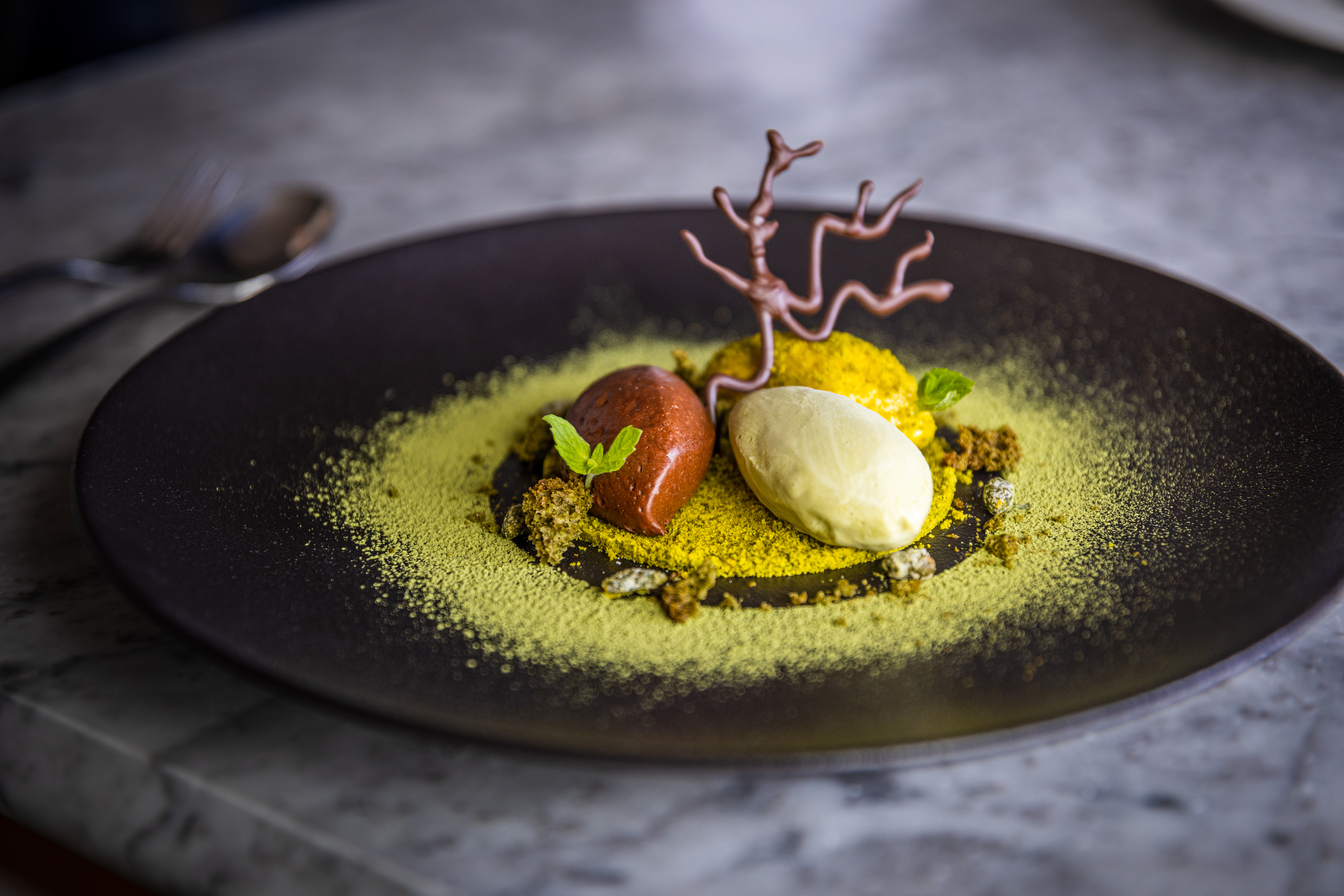 Is there anything in particular that first inspired you to become a chef?

I started when I was 15, as a kitchen porter, and it was back in the days when all the chefs wore big hats and neck ties. We used to feel privileged working underneath them, and I thought to myself ‘one day I’d love to do that’. That was really what sparked my love for cooking – that and the atmosphere in the kitchen, the team banter and the satisfaction from creating these amazing dishes.

Does everything on the menu have to be carefully calorie controlled or do you have the freedom to include treats? Is chocolate allowed? 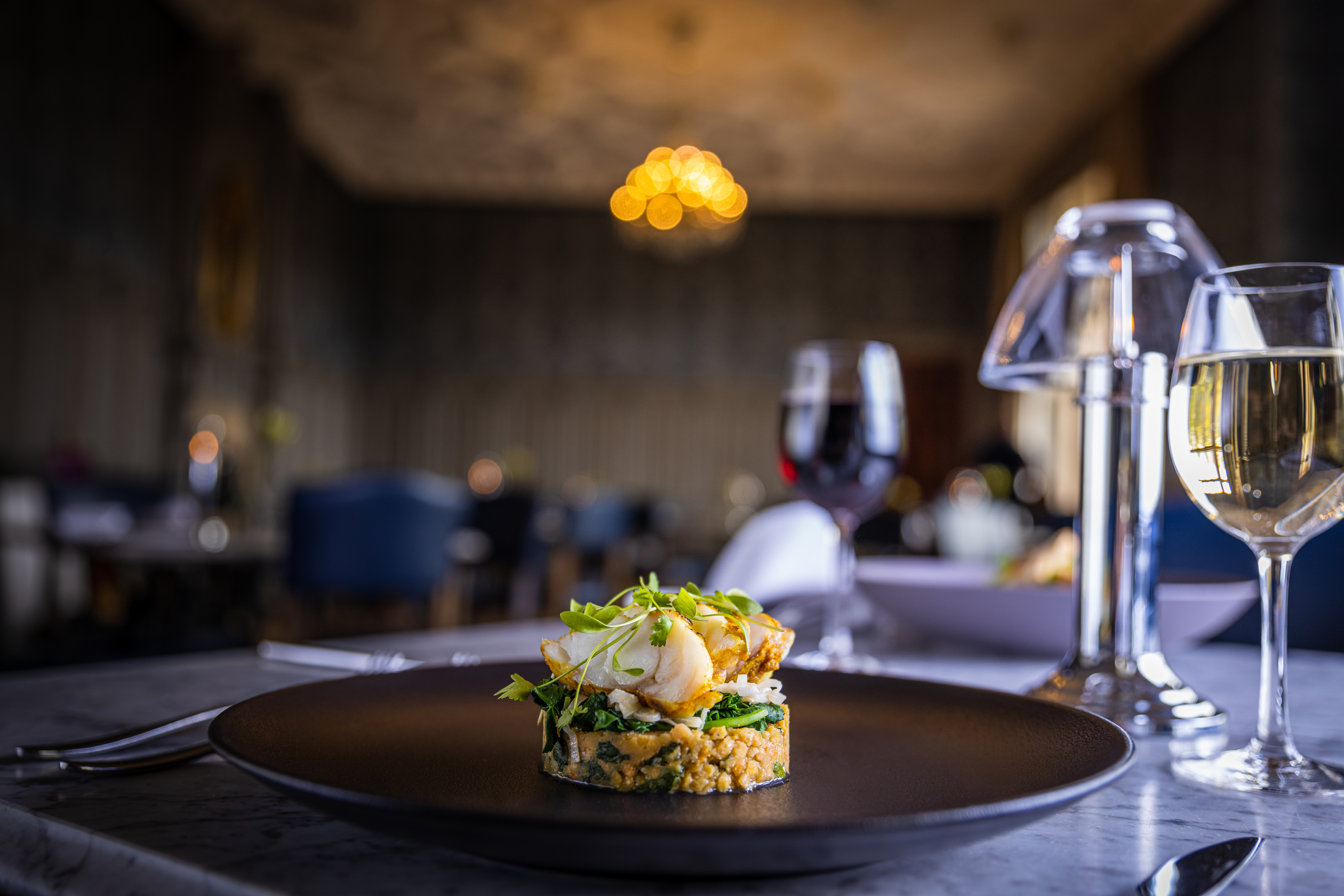 Chocolate is definitely allowed! At Hoar Cross Hall, yes, we’re a spa, but we’re also a luxury retreat – emphasis on the treat! Of course, we have options to cater to all, so if you’re seeking a delicious but lower-calorie meal then there is something for you, but we have some more indulgent options too, for example our Chocolate Pistachio Tart with Pistachio Ice Cream.

How does working for a spa like Hoar Cross Hall differ from cooking at a standalone restaurant?

I constantly want to grow, and what I find exciting here is that I have free rein on menus, free rein on the suppliers, and I can hire the right staff. I can keep pushing and growing and really make Hoar Cross Hall even more special than it already is.

What are the most popular dishes on the menu? Is there anything that’s been a Hoar Cross Hall favourite for years?

As we’ve been closed due to lockdown, the jury is still out on the most popular dish! As we had time to plan ahead of the reopening, the entire menu has changed, so guests can expect something brand-new when they come back.

How does working in such a spectacular, stately home setting influence your culinary choices?

It’s definitely a very inspiring setting to be a part of. It’s extremely grand, and being in this environment really does get the creative juices flowing. It’s important to me that my menu options reflect the grandeur of the hall, whilst also providing an alternative dining environment for guests looking for something more relaxed. The fact we have the grounds where I can grow fresh produce, as well as amazing local suppliers so close, really does all come together to make Hoar Cross Hall a Chef’s paradise.